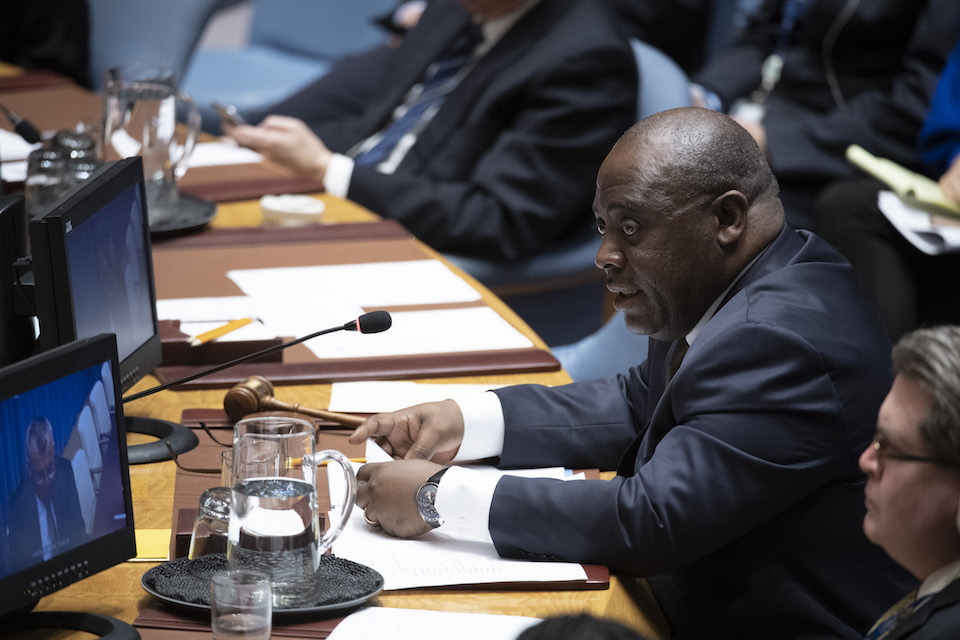 Thank you Mr President and may I say at the outset how much we welcome this initiative by Cote d’Ivoire to bring this issue back to the Council’s agenda, which I think we last considered in 2013, so it’s a timely moment to look at this.

May I also welcome UNODC Executive Director Fedotov’s briefing and thank UNODC for their efforts in this area, including of course through their regional programme for West Africa.

Now Mr President, the impact of this criminality is not only felt by individuals but its felt in communities and its felt by States. It undermines the rule of law, human rights and the ability of states to provide services, and pursue the 2030 Agenda for all of their citizens. Cross-border criminal networks, smuggling and trafficking goods and people across states’ jurisdictions can also constitute a threat to international peace and security. Drug trafficking is one form of this challenge but we saw the same argument convincingly made in this Council’s Resolutions 2331 and 2388 on trafficking of people.

Now as we’ve heard today, this has unfortunately been the case in the West African region, where, as UNODC has outlined, the region has become a significant consumption and transit zone for heroin and cocaine, enabling flows towards destination markets. The money and the violence that accompanies this trade has devastating consequences.

Drug trafficking as I’ve said can be both a means by which armed groups raise funds but also a source of conflict in themselves. Criminal gangs can corrupt and weaken a state at just the time that a strong state with strong institutions is needed to prevent conflict. I agree very much with those around the table who have talked about the importance of considering this issue holistically within the prevention and peace building setting.

Mr President, we should note and welcome the efforts in the region, particularly the work of the G5 Sahel, for greater stability and in tackling terrorism. We need to support ECOWAS, SRSG Chambas and UNOWAS’ excellent efforts as well as those initiatives that address the drivers of instability, including of course climate change, poverty, marginalisation and corruption.

The UK is playing its part. We are increasing our staffing and expertise on tackling organised crime in the region and we’re working with our partners in the region to counter trafficking, strengthen the rule of law and border security as well as supporting development and provisional services.

Mr President, there is no silver bullet to ending drug trafficking and organised crime in West Africa or indeed anywhere else. It will take a comprehensive approach by the states in the region, supported by the United Nations family holistically and its international partners. We welcome the renewed focus on criminality brought by you today by you in calling this meeting and stand ready to assist those countries suffering from this insidious threat as we ourselves suffer as well.

International Affairs Joint Communiqué between the Prime Ministers of …