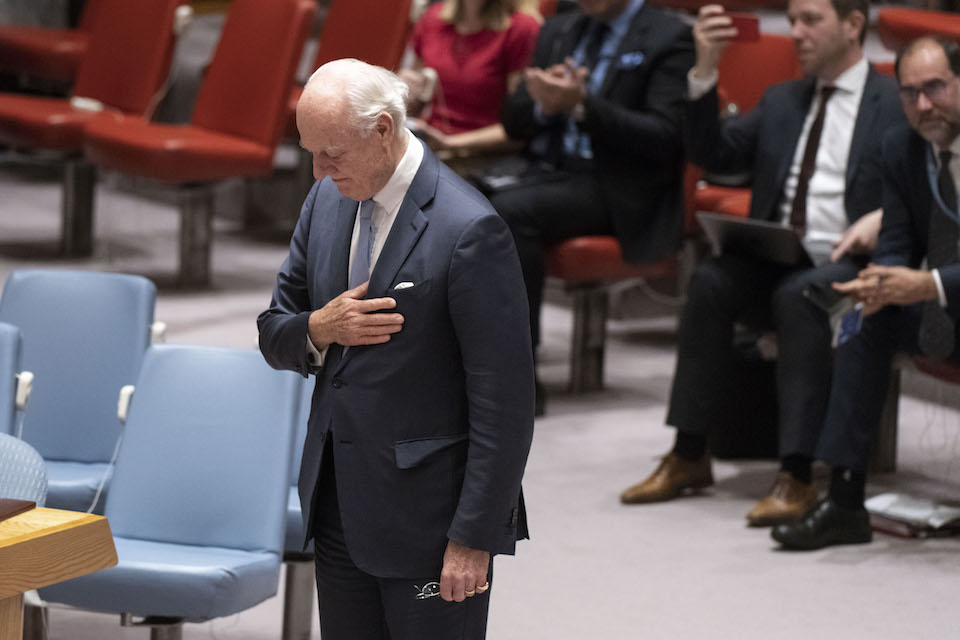 Thank you very much Mr President. Like others, I pay tribute to our good friend and colleague Staffan. It was a sad day when we learned you would step down. You have given the most enormous service to the United Nations. I personally have worked with you on Afghanistan and other issues and your track record in that country, in Iraq, in Lebanon speaks for itself. You have tried harder than anyone to try and bring a resolution to this truly terrible conflict in Syria. And as you yourself said Staffan, you have worked on it longer than the First World War, exceeding that of your predecessors, Mr Brahimi and Kofi Annan. And I think as the tribute to you showed, there isn’t a person in the United Nations who doesn’t feel very deeply the amount of commitment and energy and resolve and passion that you have brought to this most difficult of all UN Envoy tasks and through you can we also salute your wonderful team who have supported you – both the members sitting behind you but also some of those who we’ve seen on the VTC and who I know also personally from previous incarnations. I’d like to welcome Geir Pedersen but I will save that for another time when Geir is in your shoes but I hope you know that we are very indebted to you and we recognise how much we owe to you.

I think as other speakers have said it’s deeply regrettable that there hasn’t been more progress on the constitutional committee. It’s unfathomable that – for an idea that was set up to advance the political process at Sochi – that there hasn’t been more progress because it ought to have been possible to have made progress in this area. There are just a handful of days left within which to meet President Putin’s self-imposed deadline but even with just a few days to go, if progress can be made then we absolutely urge the Syrian authorities and their supporters to take it. But when all is said and done, the United Nations can only join a process that is balanced. That is the fundamental tenet on which the United Nations assists governments and assists the international community. And we will support the Secretary-General and the Under-Secretary-General to the hilt in upholding that very central tenet.

I think it was the French representative who made the point that the Astana guarantors had submitted at the moment an unbalanced and unworkable list, and we would absolutely agree with him. Again even in these last few days, if there can be a genuine consultation process then there should be one in order to achieve a meaningful reconciliation.

But I’d also like to say Mr President that we we meet almost on the third anniversary of the adoption of Resolution 2254 and it remains the best agreement we have made and the closest we have come to managing to work to an end to this crisis. It is a huge failure of the international community – not of the United Nations – but of the international community that collectively we have not been able to advance this more. But above all Mr President and very obviously, it is a huge failure of the Syrian government to protect their people that has led us to this position and the Syrian government’s refusal to work towards implementation of Resolution 2254 is at the absolute heart of all the horrors and all the awful things that have been inflicted on Syria and her people.

Mr President, the central problem in the whole Syria conflict has always been the Syrian authorities’ refusal to address the legitimate grievances of the Syrian people. That’s how the conflict came about in the first place. It remains a central tenet, an essential element of what has to be done if anything is ever to move forward. The Special Envoy has often come to this Council but been unable to record any positive movement by the regime in this direction.

And I just want to stress again Mr President, without movement in that direction whatever happens militarily; Syria will not see reconstruction. She will not see rehabilitation into the international community. Her people will not see representative government and whatever interim arrangement comes into force in Syria, it will not help the Syrian authorities hold their territory and it will not help them govern that territory and it certainly won’t do anything to address the aspiration,s the legitimate aspirations of all of Syria’s people from whichever religious or ethnic community they come. That’s such a central point. Rehabilitation means being able to stop a reversion to the tensions and the situation that existed before the conflict without addressing those aspirations of all of Syria’s people. Without genuine representative government, there will never be an end to the suffering of the Syrian people. And I really think that the Council should look ahead and focus, keep that question of what will most help the Syrian people in the future right at the forefront of its of its plans and of its thinking.

Finally Mr President if I may I’d like to say a word about Da’esh. The United Kingdom has been a leading member of the Global Coalition. We’re proud of our role alongside other partners in the fight against Da’esh since military operations began. The Coalition and its partners in Syria and Iraq have captured the vast majority of Da’esh territory and important advances have been made even in recent days. In the last area of eastern Syria which Daish has occupied the Royal Air Force of the United Kingdom was active just in the last 24 hours. Much remains to be done in the global campaign Mr President but we must not lose sight of the threat that Da’esh continue to pose even when they continue no longer to hold territory.