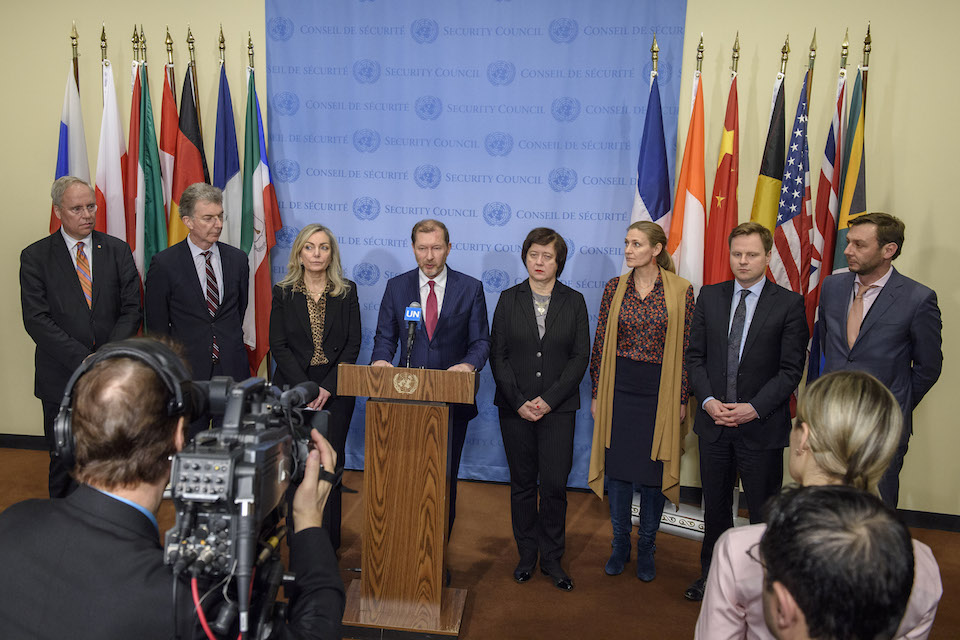 Thank you, Mr President. And let me begin by thanking Rosemary DiCarlo for her informative and timely briefing and thank you to the United States for requesting this meeting.

Mr President, let me begin by saying I agree with everything that the German Ambassador said today and, in particular, about the importance of the Security Council addressing this issue. And I note that the agenda for today’s discussion does not mention the situation in the region or wider threats to international peace and security. The agenda item which we’ve all agreed is the situation in the Bolivarian Republic of Venezuela.

Mr President, years of misrule and corruption have wrecked the Venezuelan economy. The actions of the Maduro regime have led to economic collapse, which threatens the peace and security of the region. Over 3.5 million Venezuelans have left their country for other countries in the region. This is one of the greatest migrant crises ever faced by Latin America. It has placed huge strain on the social services of nations in the region. And that’s why, together with the human rights situation mentioned by my German colleague, it is completely appropriate that this Council continues to address the issue.

Mr President, I was disappointed to hear the Russian Ambassador attempt to ridicule what he called the “moans and groans” about the humanitarian situation in Venezuela. No one on this Council should belittle the suffering of the Venezuelan people. I also note that the Russian Ambassador asked all of us a question, which I will attempt to answer. He asked which of us on this Council would have acted any differently faced with unwanted attempts to deliver humanitarian assistance. Well let me tell him that we would have acted differently and looking around the Council today I think a majority of Council members would have acted differently. We would not have used live fire against civilians attempting to deliver aid. We would not direct paramilitary thugs to attack civilians. We would not arrest and detain our political opponents and we wouldn’t have mismanaged the country through years of misrule and corruption, causing economic collapse and a humanitarian crisis. I hope that goes some way to answering his question.

Mr President, the United Kingdom joins other members of this Council in condemning the violence that took place on Venezuela’s borders with Colombia and Brazil at the weekend. Maduro’s use of deadly violence against his own people and other concerning acts of aggression to block the supply of desperately needed humanitarian aid are simply repugnant.

Mr President, the Maduro regime’s oppressive policies affect all sectors of the population – from the innocent civilians, including women and children, who lack access to essential medical and other basic supplies, to journalists whose work is censored by the regime. And as we heard from the UN just yesterday, renowned journalist Jorge Ramos was reportedly detained in the Mia Flores Palace, later to be released and deported while his team’s equipment was confiscated. As with the lack of freedom given to journalists, other essential freedoms – such as democratic ones – are simply not present in Venezuela. Only a democratic solution will resolve this crisis.

The United Kingdom thanks the Lima Group and the Organization of American States for their clear words and strong action towards this goal. It is important that the region continues to take the lead. We stand with these regional bodies and with Juan Guaidó in pursuit of our shared goal to bring peace and stability to Venezuela.

Mr President, the only way to achieve peace and stability is by democratic transition is by free and fair presidential elections, as demanded by interim President Guaidó and the National Assembly, in line with the Venezuelan Constitution. Until this is achieved, the current humanitarian crisis caused by the Maduro regime’s corrupt policies will continue.

The United Kingdom has committed to give $8.6 million in emergency aid to treat malnourished children and provide vaccinations and clean water to the most vulnerable communities affected by the crisis. We encourage our partners in the international community and on this Council to consider what more can be done to send a clear signal to the Maduro regime that nothing short of free and fair presidential elections will do. This includes considering additional sanctions against individual members of the Maduro regime who have benefited from their corrupt policies. These should not negatively affect the dire humanitarian situation, which is solely the responsibility of the regime.

Mr President, the world cannot stand by in the face of this man made crisis. The Venezuelan people deserve a better future. They have suffered enough at the hands of the Maduro regime. Free and fair Presidential elections is the only solution. The Council and the international community should do our utmost to support the same. Thank you.

Free and fair elections to support the people of Venezuela

International Affairs jHub: what we do