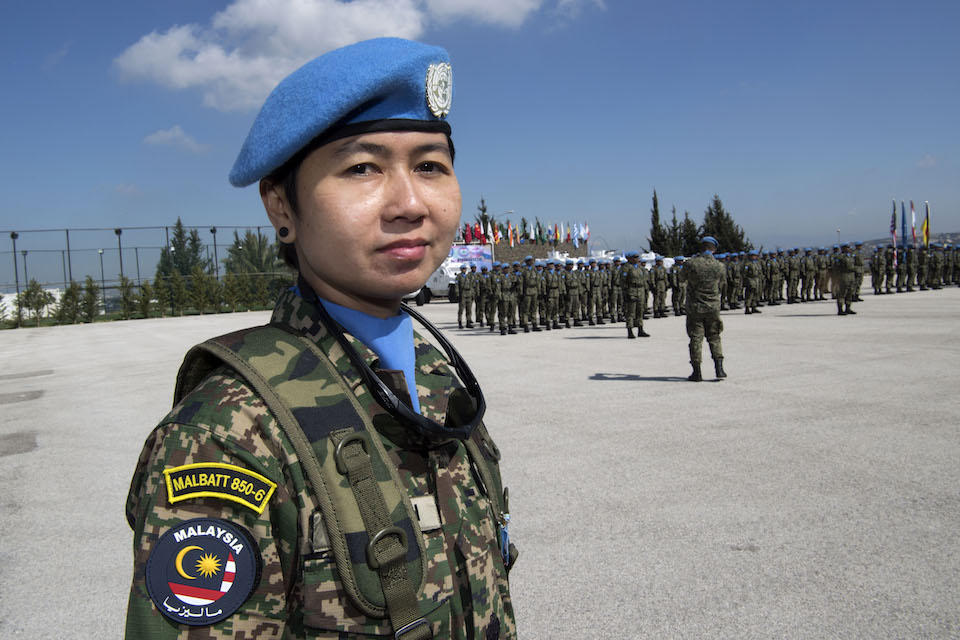 Thank you, Madam President. Let me start by saying how proud I am that the United Kingdom has already met and exceeded United Nations’ targets set in 2015 for doubling female participation in peacekeeping by 2020. Women currently make up 7 percent of our contingent of peacekeeping troops and 18 percent of military observers and staff officers. This is not just a point of principle, nor about simply saying the right thing. It is about effectiveness. Just as in our countries, we suffer economically if we do not let all of our population participate in the workforce. So we suffer militarily if we exclude women from our armed forces and from promotion within that. We prevent ourselves getting the best people for the job by limiting the pool available and therefore we limit our fighting ability.

On the ground, aside from having the best available troops, we see real operational benefits from deploying more gender-balanced forces. We note, as others have, that deploying more peacekeepers enables missions to engage with a wider range of people in local communities, which, in turn, leads to better situational awareness. Asking peacekeepers to understand local conflict dynamics and risks without the ability to engage effectively with local women is like asking them to patrol with one eye closed. And having more female peacekeepers in missions can make it easier for women and girls who have survived sexual violence in conflict or sexual exploitation of abuse to come forward and speak about their experiences.

But we do recognise and share the challenges that most national militaries face in achieving gender parity. Women still make up only 10.5 percent of the United Kingdom’s regular armed forces – only 13 percent of our military officers. Examples set by trailblazing women such as Air Marshal Sue Gray, who became the first three-star female officer in the Royal Air Force this year, have yet to become the norm. So, although we are proud of the progress we have made in increasing female participation in the UK’s armed forces and, by extension, in our peacekeeping contributions, we know there is much more to do.

And having said earlier, Madam President that this is not about just saying the right thing. It’s about doing things. Let me set out a few things that we think can happen.

We need to keep changing mindsets, ensuring that expanding women’s participation is seen as an essential operational enabler, part of the core function of the mission indeed and not as a box ticking exercise.

The UK supports innovative approaches to tackling these and other barriers to women’s meaningful participation. In peacekeeping, we are committed to focusing on practical action, sharing best practices and lessons learned and to keep ourselves learning from other troop and police contributing nations. To this end, as we announced in the margins of the Peacekeeping Ministerial, the UK is contributing $1.3 million to the newly launched Elsie Initiative Fund for uniformed women in peace operations. And we fully support the Elsie Fund’s focus on incentivising and assisting Member States to deploy more trained and qualified uniformed women and on maximising the impact of women’s participation.

Now, Madam President, it is important that we increase the number of women, the proportion of women in peacekeeping. But of course all peacekeepers, male and female, share a responsibility to conduct peacekeeping operations in a gender sensitive manner. We are determined to equip our peacekeepers with the skills, knowledge and understanding that this requires. Since November 2016, all UK military personnel deploying on major international operations have received training in preventing sexual violence in conflict and on the Women, Peace and Security agenda. And as a training partner, we are committed to ensuring that the training we offer personnel from other countries is gender sensitive. Incorporating gender perspectives in peacekeeping does not only concern women. Gender equality is everybody’s business. We all stand to gain from more effective, inclusive peacekeeping if we redouble our efforts towards achieving high ambition targets the women’s participation.

And flowing from that, Madam President I have a question for our briefers, which is simply to ask, in the spirit of doing: what are the most urgent interventions you would recommend the United Nations and Member States adopt to make mission environments more women friendly? And what are the best examples of best practice – the best example of best practices, if you like – that you’ve seen in use at national level to make this agenda really go forward?