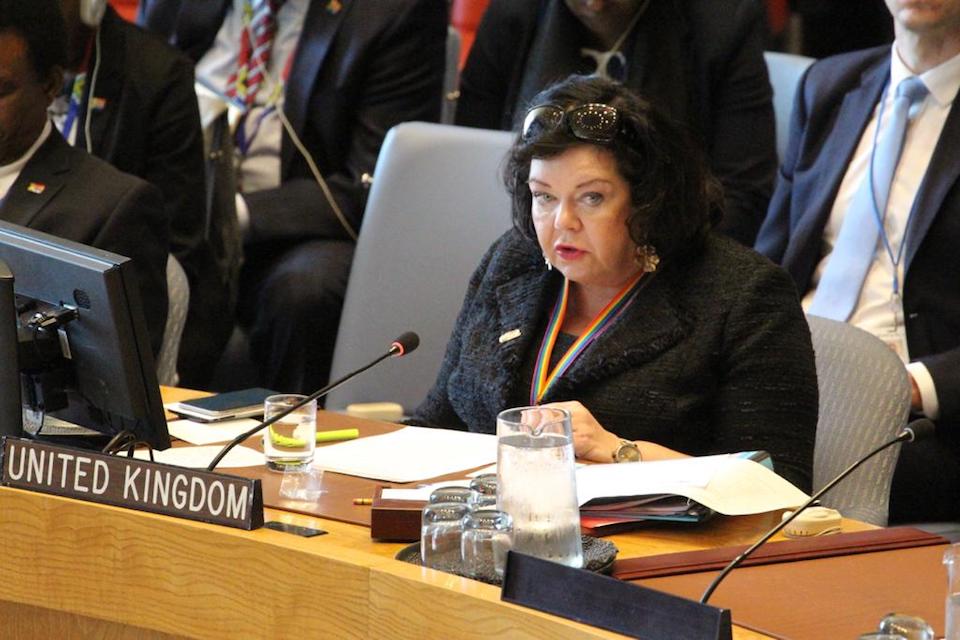 Thank you very much, Mr President. Thank you to our three briefers. And thank you to the United States for proposing this discussion today and to Vice President Pence for joining the Security Council.

Mr President, it’s clear from the briefings that we heard: that the humanitarian crisis in Venezuela has reached epic proportions and it is right that the Security Council should discuss such issues. I know there’s an age-old debate that we’ve never resolved as to how bad does a situation have to get within a country in order for it to constitute the sort of issue that the Security Council has looked at. But the figures that we’ve heard today and the effect on the Venezuelan people and the effect on their neighbours and the view of the regional authorities and the view of the international authorities – as represented by the Special Envoy and as represented by the Emergency Relief Coordinator, I think make it absolutely an issue that this Council should be discussing.

Mr President, we’ve heard today how ordinary Venezuelans are unable to access food and basic healthcare. Preventable diseases such as measles and diphtheria have reappeared. HIV goes untreated and maternal and newborn mortality rates are extremely high. Electricity and water shortages, as many speakers have said, made it all much worse.

The figures are appalling, but we’re also starting to hear words like ‘unprecedented’ and ‘unparalleled’, and I heard today some things I didn’t know – particularly about the health side say thank you to Dr Page – and it’s truly shocking. The malaria figure particularly stuck in my mind. I think the answer on measles is to refer to the George Washington University study about Russian social media. So I’m not going to go into that there but I think malaria figure alone ought to really horrify us. I think it’s all the more shocking because as a number of speakers have said, this crisis is manmade and all the more so because Venezuela used to be a prosperous country. My understanding of the OECD and World Bank figures, Mr President, is that Venezuela was considered to be an upper/middle income country. So that you can go from that status to having the sorts of problems that we heard described today really does draw the concern of the international community.

I wanted also to reference the refugee situation. We’ve heard the figure: 3.4 million Venezuelans have left their country to go to their neighbours. I too welcome the presence of the Colombian Foreign Minister here today and we commend him and his government and our Security Council colleague, Peru, and others in the region that have offered refuge and hope to those millions of ordinary Venezuelans.

But we cannot rely solely on the region’s efforts because as we also heard today that number is set to rise quite dramatically. I wanted to thank UNHCR and IOM through the Special Envoy for the efforts they have made.

I think we agree: it’s a positive first step that the Maduro regime no longer denies the existence of the crisis and that the Red Cross and the UN are allowed to start the international humanitarian response – and the scale of what’s needed was set out graphically by the Emergency Relief Coordinator. So I think it just points to how much more needs to be done.

For the United Kingdom, we agree with the majority of this Council, Mr President for a new start in Venezuela and we will be working closely with the international community to ensure assistance can reach those most in need. But I wanted to echo what Vice President Pence said in his emphasis on democracy and the rule of law. We stand with the Venezuelan people. This is about what is needed to help the Venezuelan people so we support the UN’s efforts, under OCHA’s leadership, to mount an international humanitarian response, commensurate with the severity of the situation and underpinned by the principles of independence, neutrality and impartiality. And I would call Member States’ attention to the three areas that the Emergency Relief Coordinator outlined.

We call on the Maduro regime, Mr President, and all actors to facilitate the humanitarian process and to allow further international, UN, Red Cross and NGO humanitarian organisations unhindered access for humanitarian assistance to meet the urgent needs of the Venezuelan people. I repeat: it is against international law to try and deny your own people the help that they need, particularly food.

I’d also like, Mr President to use this occasion to call on Member States to support the UN’s efforts. For our part, we have committed a package of nearly $9 million in humanitarian aid to respond to the most severe needs in Venezuela and host countries. We hope that our aid package will respond to the most severe health and nutrition needs by supporting emergency rooms and maternity wards. We hope to help people fleeing their homes have access to critical support and we hope to help meet the immediate needs of those forced to flee Venezuela who are at greater risk of exploitation. So we plan to offer migrants access to personal documentation and information on how to access basic services.

Mr President, it’s important we’re clear that the suffering faced by the Venezuelan people is the result of years of mismanagement by the de facto Government. Humanitarian aid is urgently needed but, as many speakers have spoken out today, it won’t solve the crisis. Political change is equally urgent. The legitimate interim President Juan Guaidó was stripped of his immunity of Speaker of the National Assembly. His Chief of Staff was arrested and others who are trying to secure peace and democracy in Venezuela have suffered similar intimidation and threats. Mr Guaidó has our full support in his efforts to bring about the necessary change. The people of Venezuela deserve a better future and I repeat, Mr President, it is our belief that it’s time for a new start with free and fair elections in accordance with international democratic standards. Thank you.

Thank you, Mr President. I don’t want to prolong this. I don’t want to get into a tit for tat but the money was not stolen from a British bank. It’s very important that we correct these falsehoods. Thank you.

Thank you, Mr President, I apologize for taking the floor again. But I can’t allow those allegations against the Bank of England to go unaddressed. I reject completely the allegations made by the Venezuela Ambassador. He’s made them before. I wrote to the then-President of the Security Council, the Equatorial Guinea PR, on the 21st February, rejecting the allegations. I will have that letter circulated again and we’ll put it on our website. But for the benefit of the record, the Bank of England’s reputation is world-renowned. It operates to the highest standards. It has operational independence from the British government. Thank you.

Lack of food and access to healthcare in Venezuela

International Affairs Putting humanitarian issues at the forefront of S…
0
✖