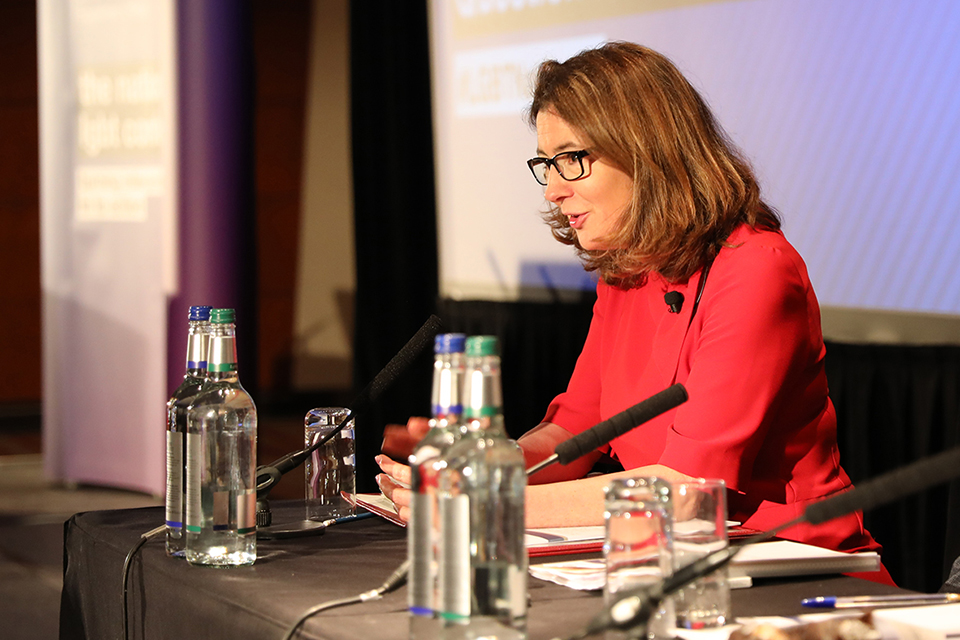 I am most grateful to Galop for inviting me here today to address you on what I think is a really important topic, and actually one that has been on my mind for some time now.

And as I was thinking about what I might say to you one word keeps coming to mind, and that’s courage.

The courage it must take to hold your same-sex partner’s hand in public.

The courage that’s needed to go out into the world and be yourself as an LGBT person.

And the courage that you need to speak out when a place that you should feel safest — your home — isn’t safe for you any more.

I am in a very fortunate position because I’m the Home Office Minister and an Equalities Minister, and I see first hand the impact domestic violence and abuse can have; and the courage that survivors have.

I am fortunate because, as a minister for both these departments, I get to see the brilliant work that organisations like Galop and those represented here today carry out to support victims of domestic violence and abuse. And I also get to do something to help.

In July 2018, the Government Equalities Office published the results of the LGBT Survey.

More than 108,000 people responded to that survey, making it the largest domestic survey of its kind anywhere in the world.

It revealed some of the experiences that LGBT people had in a wide range of areas; some of the most shocking were about things that had happened in their own homes.

The survey asked whether respondents had experienced any negative incidents due to being LGBT, or being thought to be LGBT, involving someone that they lived with in the 12 months preceding the survey.

Around 3 in 10 respondents had experienced some kind of negative incident involving someone that they lived with.

The experiences they reported do not make for comfortable reading:

Around 4 in 10 of those who reported a negative incident said that their own parents and guardians had been the perpetrators. Around 2 in 10 said it was either a partner or an ex-partner.

These are people that they were meant to be able to trust; but they let them down.

Greater Manchester Police are one of the first police forces in the country to record LGBT cases of domestic abuse separately — similar to how all police forces record hate crime.

In 2017/18, the force recorded a total of 775 cases of domestic abuse amongst LGBT people. And of course that’s the reported ones.

In isolation, these statistics are shocking enough; but they are not the end of the story.

In March, I visited Independent Choices — it’s a domestic abuse service that’s based in Manchester — and I got to speak to one of their independent domestic violence advisors who works directly with LGBT victims. Seeing how that service runs; how it recognises and responds to the distinct needs of LGBT victims and survivors really helped to put the numbers from the LGBT survey into perspective.

That visit really brought me back to that word courage — and that you really shouldn’t need courage to walk through your own front door, especially when as an LGBT person, you already needed so much courage to walk out of it.

The statistics. The stories. They motivate us, both at the Home Office and at the Government Equalities Office, to act so that everyone, no matter who you are or where you come from, can feel safe both inside your home and outside of it.

As a Government we are completely committed to transforming the response to domestic abuse. And that’s why we’re introducing the Domestic Abuse Bill and a wider action plan to tackle it.

The draft Domestic Abuse Bill and wider activities set out in our recent consultation response on this issue will help to ensure that victims have the confidence to come forward and report their experience, safe in the knowledge that the justice system and other agencies will do everything that they can to protect and support them and their children, and also to pursue their abuser.

We will also be introducing statutory guidance to support the definition. This guidance will provide more detail on the features of domestic abuse, including gender and sexual orientation, and the types of abuse which may be experienced by specific groups.

These are just some of the changes we are making in law to ensure victims and survivors of domestic know that they will be supported and protected, that is the most important thing.

As with any issue though, changing the law will only go so far. We recognise the distinct needs that LGBT victims and survivors of domestic abuse have, separate from their non-LGBT counterparts.

Evidence from the National LGBT Survey showed us the value that LGBT victims and survivors place on dedicated and tailored support services that are designed to meet obviously their unique needs. That is why we provided Galop with £500,000 to build that capacity and deliver support to LGBT victims of domestic abuse. I’m sorry that you had to do it in such a hurry, such is sometimes the way with government.

But what you’re doing is providing a targeted approach that will deliver a national casework and inter-agency support service. It will ensure that more LGBT victims and survivors have access to the appropriate support and the services that they need.

The project will facilitate a national step change in knowledge and understanding on LGBT domestic violence through the development and use of technology. Galop will deliver a campaign to raise awareness within LGBT communities and increase the number of LGBT people actually reporting domestic violence and seeking out the help that they need.

The project will also provide training and consultancy to deliver the knowledge and understanding of the needs and experiences of LGBT victims of domestic violence and abuse in statutory, voluntary and LGBT organisations that work with victims of domestic abuse.

It’s a very good programme of activity, and we are delighted to be working with you on this issue.

As I draw my remarks to a close, I want to return to the findings from the National LGBT Survey.

At the end of the survey, we gave people the chance to tell us anything they wanted, and they had 500 words to do it.

Some people chose to tell us about their experience of domestic abuse.

One person — a l*****n lady from Devon — shared their story: and it demonstrates powerfully why we at the Home Office and at the Government Equalities Office care so much about this issue.

“We do not report it as we are so used to homophobic behaviour that we keep our mouths shut.

“We are afraid of the police laughing at us.

“We are afraid of the humiliation of having to say we were raped by another woman.

“We are afraid that no-one will take us seriously.”

That’s is the tragedy and the reality of domestic abuse. It’s a tragedy that people are stripped of their courage to speak out.

94% of respondents to the National LGBT Survey who had experienced a negative incident said that the most serious incident they had experienced had not been reported, either by themselves or by someone else.

I’m going to say that again, because it is so shocking: more than 9 in 10 of the most serious incidents experienced were not reported.

And why? Because people thought it was too minor, not serious enough and that it happens all the time. Because they were too scared to speak out. That has to end.

I hope that you get the most out of today’s conference and I thank you for listening to me and I look forward to working with you all in what is I think a massive challenge – driving out domestic violence, within the non-LGBT community and with the additional challenges within the LGBT community as well.

Thank you very much for listening.