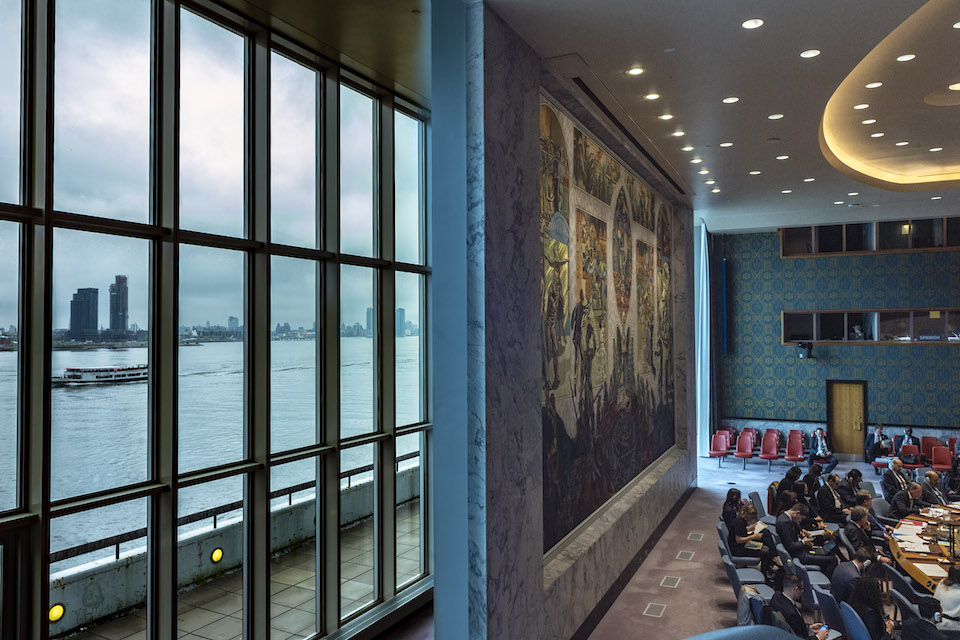 Thank you to the Special Envoy. I’m going to be brief but I don’t want that to be construed as any lack of interest. It’s just that I think many of the speakers who’ve spoken have very eloquently, as with our American colleague, put the case about the political process.

So I’ll start, if I may, with some points about the security situation. What you said about the troubling resurgence of violence worries us. There have been reports this morning that the Syrian Authorities have deployed multiple barrel bombs in attacks in northern Hama, which I think is the first time such weapons have been used in over seven months. This is indiscriminate. Use of indiscriminate weaponry is unacceptable. And what is particularly worrying is that it doesn’t seem to be a signal that the Syrian regime is serious about the protection of the Syrian people. So it would be good to have an assessment from the Special Envoy as to whether you think this actually calls into question a commitment to the political settlement? And we’ve also seen some recent correspondence from the Syrians to the Security Council alleging activity by armed terrorist groups with the support of “foreign intelligence agencies”. This is about chemical weapons attacks. And there were more allegations that the White Helmets are involved.

Mr President, I’ve been very categorical in this chamber and I regret the need to be so again. But the White Helmets are a humanitarian organisation. They are purely a humanitarian organisation. They are very brave people. They are Syrians. And to date, they have saved 115,000 lives. So we look to the Syrian authorities to abide by their international obligations in relation to chemical weapons and to refrain from using them.

I would like to say something briefly about Idlib, like others. We’re very concerned by the frequent reports of regime shelling of areas in the demilitarised zone and we understand that over 120,000 people have been displaced since February as a result. So we look to Russia and Iran – who, along with Turkey, are the Astana guarantors – to ensure that the ceasefire agreed at Sochi is fully respected and that the current actions cease immediately. So let me be clear, it’s not just that we want to see the ceasefire respected; we want to see those Member States with influence use that influence to ensure that the ceasefire is respected.

Turning to the political process, I think that, Special Envoy, I think you’ve made really good efforts, so thank you for those. And we support you, as you continue. And I think you’re right to say that you should work on the full range of issues under 2254.

I just wanted to recall, Mr President that SCR 2254 was adopted in December 2015. That’s 40 months ago. But it set a deadline forty months ago of six months – so thirty four months ago – to set a schedule and process for drafting a new constitution. And we really can’t allow the Syrian authorities to drag this out indefinitely. So we definitely support very strongly the Special Envoy’s drive to get this sorted out in the coming months.

OP4 of that resolution calls for the establishment of a credible, inclusive and non-sectarian governance. If I could ask: what is your assessment of the Syrian authorities progress towards responding to the Council’s request in that resolution?

And I think what’s being done on the constitutional committee is a good step forward. Anything that can convene the international players in Geneva is to be welcomed. I can promise you we’ll be supportive and pragmatic about that. But we, again, we would call on those with influence over the Syrian regime to encourage it to engage seriously and constructively in the political process – and this includes creating conditions for humanitarian access.

I just want to look ahead to a point when the current Syrian authorities will want to be reintegrated into the international community. Without this reintegration, Syria will never be stable, will never be fully prosperous. This is all the more reason why there needs to be a credible political process. But to recall, Mr President, that the United Kingdom has been clear and is still clear that we will not consider providing reconstruction assistance absent that credible political settlement.

No reconstruction assistance without a credible political settlement

International Affairs The need for mediation and humanitarian assistanc…

International Affairs Foreign Secretary visit to Africa: April to May 2…
0
✖