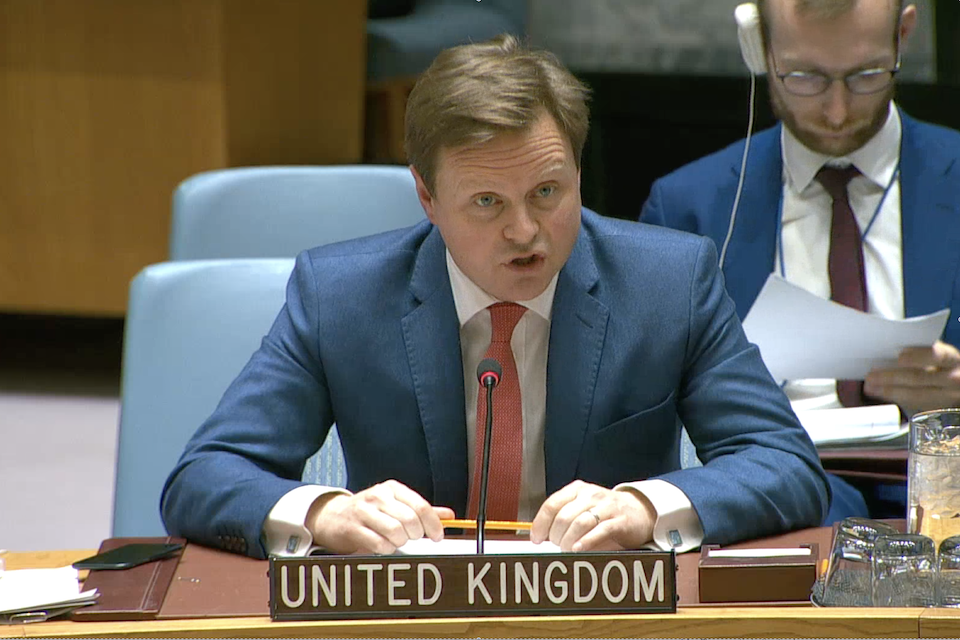 Thank you Madam President. And let me begin by thanking the Ambassador of Indonesia for his briefing and for his work since assuming the Chair of the 1540 Committee.

Madam President, the 1540 Committee is an important cornerstone of the international non-proliferation architecture and as such, it’s a key part of the rules-based international system. The Committee plays a vital role in helping states prevent the proliferation of nuclear, chemical and biological weapons to Non-State Actors and thus strengthening our collective efforts to deter and eradicate the use of these weapons.

We only need to look at instances of recent years where chemical weapons have been used by groups such as Daesh in Iraq and Syria to realise what is at stake. We cannot stand by and allow the unconscionable use of such weapons to take place. The UK therefore is and will remain a strong supporter of the work of the Committee. We are pleased that this year’s programme of work has been adopted swiftly and see two key priorities for the Committee’s work this year under the leadership of the Indonesian Ambassador.

First, implementation of Resolution 1540: All states with the assistance of the Committee should work to ensure that their legislation, national control frameworks and mechanisms for both internal and international cooperation are up to date and fit for purpose. It is particularly important that States whose specific circumstances, such as being nexus points in global supply chains, take extra care to ensure that they are implementing Resolution 1540 effectively.

As the Ambassador from Indonesia has mentioned this morning, developing voluntary National Action Plans and assigning national points of contact are practical steps that all States can take and we commend these steps to all UN Member States today.

We also join the United States in urging all States who have not yet voluntarily reported their implementation of Resolution 1540 to the Committee to do so as quickly and as practically as possible. In an interconnected world, a chain is only as strong as its weakest link. And the responsibility lies with all of us. Looking ahead, we recognise that the next comprehensive review of the implementation of 1540 will take place in 2021 and the UK stands ready to do all we can to make sure that process is thorough, effective and leads to practical outcomes in deterring and preventing the proliferation of WMD.

Second, Madam President, a second priority should be assistance to States. Again, I am grateful that the Ambassador from Indonesia highlighted this issue in his remarks this morning. Effective implementation of Resolution 1540 isn’t straightforward, however vital it may be. I welcome the work already being done by the Committee to facilitate the provision of assistance to States who have requested it, including by helping coordinate this with States and international organisations who have the capacity to provide it.

The UK stands ready to provide legal and regulatory expertise as well as broader support to States looking to meet their obligations and strengthen their national frameworks. In this regard, the work of Working Group 2, coordinated by France, is particularly important and I take this opportunity to thank France as well as Peru, Cote d’Ivoire and the United States who coordinate the other working groups for their diligent work here.

I also take the opportunity to recognise the vital work undertaken by the Group of Experts, coordinated by Mr. Raphaël Prenat. The UK notes with concern the financial situation highlighted by the Ambassador from Indonesia and we’ll be following this issue very closely.

Madam President, the work of the 1540 Committee focuses on preventing the use of weapons of mass destruction by Non-State Actors. However, I cannot conclude my remarks without also touching briefly – as my colleague from Equatorial Guinea did – on the use of weapons of mass destruction by State Actors because when we see States using chemical weapons in flagrant breach of international law, there are proliferation consequences. The use of such weapons by an organisation as craven as Daesh is unconscionable, as is government use of chemical weapons against its own people, as in the case of Syria, or against another state, as happened on the streets of Salisbury in the United Kingdom just over one year ago.

Preventing the heinous use of chemical weapons by Non-State Actors

International Affairs UK government has successfully pushed for a revie…
0
✖