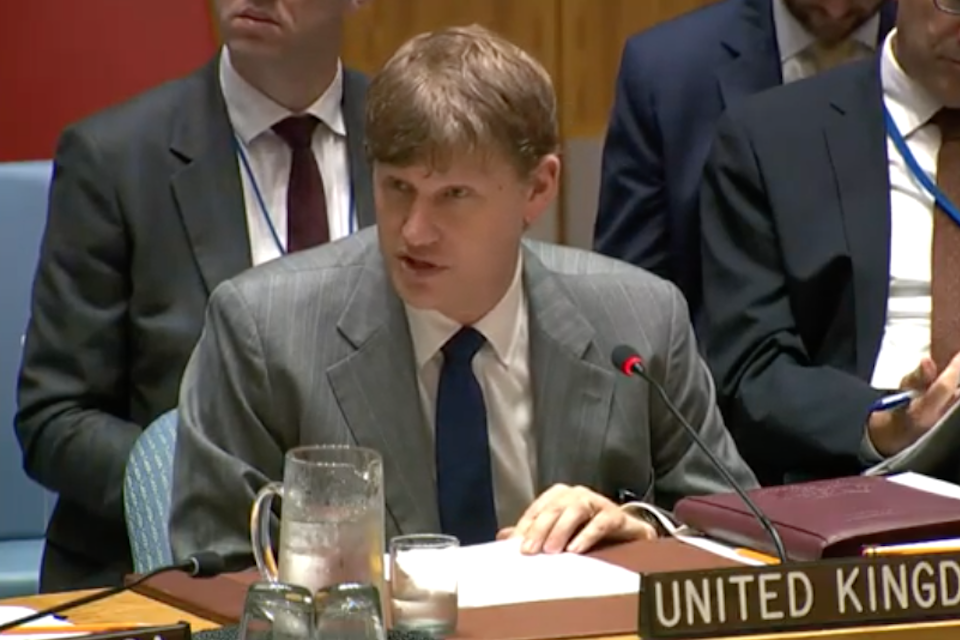 Thank you, Mr President. I very much welcome the opportunity to discuss working methods today. It’s an important subject and it affects this Council’s ability to deliver its responsibilities under the Charter as an effective, efficient and transparent body. And thank you, Mr President for your chairmanship of the informal working group on documentation and other procedural matters.

Let me also note the progress has been made in recent years and, in particular, I would highlight the renegotiation of Note 507 in 2017, led by the Japanese Ambassador, who I see in the chamber today. That was an important step. Note 507 is both a record of the evolution of Council practice and an aspirational document, setting out the Council’s collective ambition for how it should function. We are still falling short of that ambition, including on such important issues as timekeeping and interactivity. And I agree with my American and French colleagues on the need for both greater interactivity and consultations and the right balance of meeting in public and in private.

And there is an important balance struck in Note 507 between flexibility and the need to ensure the Council’s working methods are clear and transparent. Flexibility has been one of the hallmarks of the Council’s working practices over many decades and this remains a priority for the UK in our consideration of any proposals to amend working methods.

Mr President, this Council is busier than ever. There are ever more meetings and more products. There’s an increased volume of work does not necessarily translate into effective action on the ground. More effective working methods will not alone deliver that, but they can make a contribution. And since the open debate last January, the UK has focused its efforts in two key areas and taken a number of actions.

On meetings, we believe that the Council needs to spend its time discussing the right issues. We spend too much of our time on yesterday’s conflicts. In this context, we are pleased that the Council was able to agree a reduction in the frequency of Council meetings on Kosovo at the end of last year. It is also important that we respond to the Secretary-General’s call for a surge in diplomacy to support conflict prevention. This Council needs to shoulder its responsibilities under Article 34 of the Charter. Too often, we have seen members of the Council block or attempt to block discussions of situations which may endanger the maintenance of international peace and security. In that context, the UK has recently initiated a monthly informal permanent representative-level discussion to encourage a frank exchange between ambassadors on developing threats to peace and security. This is a positive development but I’d like to emphasise that it is no substitute for a proper Council consideration not least for reasons of transparency. And I agree, by the way, with what Karen Langdon had to say on the importance of well full through Security Council missions, properly aligned with other bodies and ensuring a focus on conflict prevention as well. And given the comments she made about the cost of such missions, I do think we ought to be looking again at the use of mini missions.

Now on products, Mr President, the principal way that the Council exercising its authority is through its products. In order to have impact on the ground, Council products need to be concise and use language which is clear and straightforward. This has not always been the case. If I were to read out last year’s resolution on Somalia, Resolution 2318, this morning, it would take me over 45 minutes. Last week we collectively adopted Resolution 2472 on Somalia, which brought the length down from 12 pages to 7. The United Kingdom is committed to continuing our efforts in this area, in line with our commitments on better mandating under the Secretary-General’s A4P initiative.

Mr President, let me address some of the issues raised by my South African colleague in his statement. On the subject of pen-holding, in recent years we’ve seen growing flexibility in this area and a variety of different pen-holding configurations. For our part, the United Kingdom shares the pen with Germany on UNAMID and on Libya sanctions. And we’re currently working with Poland on a resolution on disabilities and conflict. We believe it is an important principle that the practice of pen-holding remains informal and we maintain the principle that every Council member has an equal right to take up the pen on any issue. But I’d also like to underline the importance of how pen-holders discharge their responsibilities, particularly their commitment to conduct negotiations in an inclusive manner. The UK is committed to close consultation with all relevant stakeholders during the negotiation process. We consult troop and police contributing countries, chairs of sanctions committees, countries of the region and chairs of country specific configurations of the Peacebuilding Commission and we do that routinely on every resolution for which we pen-hold. And as Presidency of his Council last August, we made sure that we spoke to the permanent representatives of every country that was on the Council’s agenda in that month or was directly affected.

Mr President, the Council’s subsidiary bodies, including as James Cockayne stated, its sanctions committees are a vital element of our work and I’d like to pay tribute to their chairs and the work that they do. We support efforts to strengthen their working methods. Every subsidiary body is different and it is right that we therefore consider working methods primarily on a case by case basis. But there are also cross-cutting issues, including, of course, on due process. And I agree very much about the vital role targeted sanctions play in giving effect to this Council’s decisions and the importance of us being able, as a Council, to ensure that those sanctions regimes are strong. And we continue to be happy to discuss these issues in more detail with Council colleagues.

On the subject of the distribution of chairmanships, the United Kingdom has chaired subsidiary bodies in the past. We have no objection in principle to doing so again. This should be the result of the annual negotiations between current and incoming members of the Council and this has always been a consensual process.

Finally, Mr President I welcome the information shared by the Representative of South Africa about the decision of the African Union Peace and Security Commission to suspend Sudan in light of the violence and killings by the military authorities, which are unacceptable and should be condemned by all. And the United Kingdom supports the African Union’s decision and the leadership it is showing in seeking to enable a transition to a civilian-led government in Sudan and we call on all Security Council members to support the African Union in this regard.