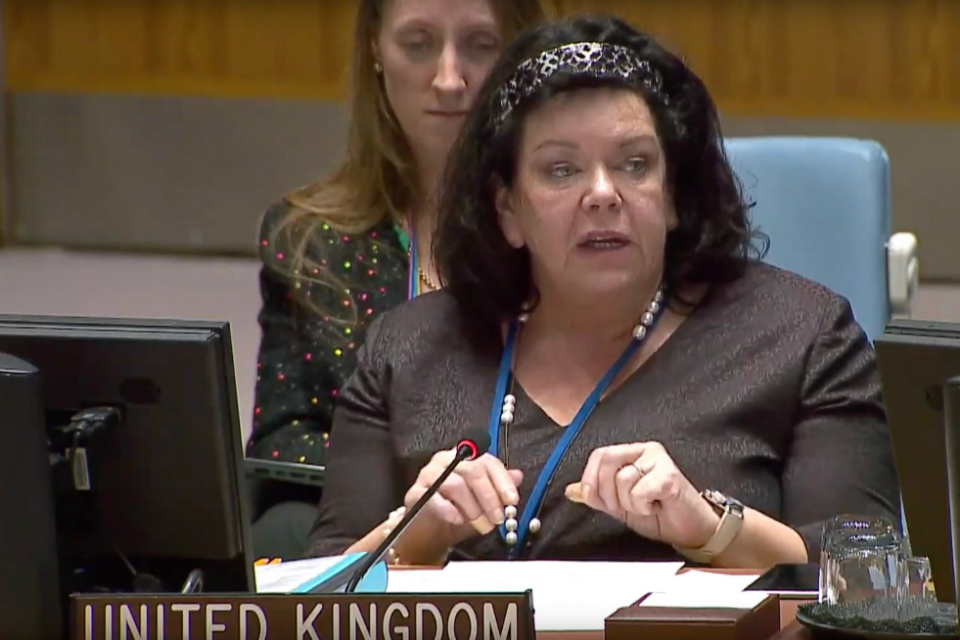 Thank you very much, Mr President. Thank you particularly to the Special Representative for his briefing and the thanks of the United Kingdom to his team for their continuing dedication to this issue. I also extend a welcome to His Excellency the Foreign Minister of Serbia and Her Excellency the Ambassador of Kosovo.

Mr President, I’ve spent a lot of my career dealing with the Balkans. I’ve spent some time in Kosovo and I’ve also spent it in Mitrovica, which is the northern part of Kosovo. The Kosovo-Serbs are the majority community. It is fair to say that there are still tensions in the communities and it is also fair to say that the communities have not always treated each other with kindness and with respect and with friendliness.

But I was sorry to hear today, Mr President, from one of the speakers: no recognition of the events that led us to 1999, to the NATO intervention and to Resolution 1244 and the UNMIK presence in Kosovo that we are dealing with today. No contrition. No acceptance of the enormity of the war crimes that were committed on the ground -war crimes that have been determined by the international tribunal, that this Council set up for that purpose. And no recognition of the events that led up to the Ahtisaari process on the status of Kosovo. And the events that then followed that and the attempts not only by this Council but also by individual members of this Council – notably the United States and Russia – acting with the European Union to try and resolve the status issue.

Mr President, all these efforts came to nothing and remain in abeyance. This is not at all to take away from the fact that each of the communities in Kosovo could do more to build a tolerant, inclusive society where rights are respected across the board. But there is a very different thing between that point and the description of how we got to where we are.

That said, the situation in Kosovo in 2019 has changed dramatically since UNMIK entered in 1999. UNMIK has played an important role – with the help of the European Union and NATO – in promoting security, stability and human rights in Kosovo and the region. Kosovo is no longer a country in conflict and it is becoming increasingly integrated into the international community.

This Council, Mr President, deals with very many important issues of international peace and security. With the agreement we have been able to reach today, on the reduction in the frequency of UNMIK sessions going forward, followed by the President of the Council – so thank you, Mr President, for your role in this. With this agreement to reduce the number of meetings in the Council, we have taken a proportionate step to the sort of issue Kosovo is. Enabling the Council to focus its efforts on much more fierce, intractable and live conflicts. At the same time, Mr President, we do support a strategic review of the UNMIK mission to ensure that UNMIK’s efforts are tailored fully to the situation on the ground.

Mr President, as the UNMIK report makes clear, and not withstanding developments overall in Kosovo, sadly tensions between Belgrade and Pristina have risen over the reporting period. And I think it’s incumbent on all of us, Mr President, to look forward to potential solutions and for political leaders in the region – but particularly in Kosovo and Serbia – to refrain from exacerbating tensions and divisions.

Mr President, I referred a few minutes ago to the fact that Kosovo is not an acute crisis situation of the sort that the Council sadly all too often has to deal with. Rather it and Serbia are fortunate in that the European Union has offered a dialogue within which they can normalize their relations and they can make progress towards integration into the European Union as equals and sovereign and respecting each other.

There are other conflicts, Mr President, where we have no such prospect of any sort of agreement on those lines. And I really would like to use this session to appeal to the political leaders in Belgrade and Pristina to recognise the opportunity that the EU-facilitated dialogue offers them: to be able to resolve their differences and move forward for the sake of their peoples, for the sake of their history, for the sake of their relations, as equal and sovereign neighbors working together for the prosperity and democracy of Europe. And in addition to that, I look to both parties to cease all provocations which increase tensions and to call on them to show the good faith that the dialogue expects.

Progress on the dialogue is not only vital for the prosperity of both Kosovo and Serbia and the wider region, for its stability and its security. It would be a very important example of how at a very unpredictable time in world affairs, two former adversaries could come together and show that a way forward can be found. To mutual – I stress this Mr President – to mutual benefit. I want to say that we also welcome the law mandating the Kosovo state delegation which passed its first reading on 2 February. The state delegation, in the context of the dialogue, will help ensure that a plurality of voices from across the political spectrum is able to deliver a deal that the Kosovo Parliament and the country can accept. And of course any deal should be comprehensive, inclusive and contribute to regional stability and security.

I’d just like, if I may, Mr President, to highlight one aspect of the Special Representative’s report to which the Kosovo Ambassador alluded. And this is the transition of the Kosovan security forces which this Council discussed in December. And I’d like to reiterate what I said at that time. The United Kingdom believes that it’s Kosovo’s right as an independent, self-governing state to develop its own armed forces. Our legal interpretation of UNSCR 1244 is that it does not – repeat not – contain anything that precludes the future transition of the mandate of the Kosovo Security Force.

That said, Mr President, I repeat what I said in December: we look to Kosovo to act responsibly, transparently and in consultation with NATO Allies to uphold existing commitments to arrangements with the NATO force KFOR.

In closing Mr President, I’d like to again pay tribute to Council colleagues who have helped us reach a sensible and proportionate way forward on the frequency with which this Council discusses Kosovo. And I’d like to reiterate our thanks the Special Representative and for his team on their efforts on behalf of this Council.