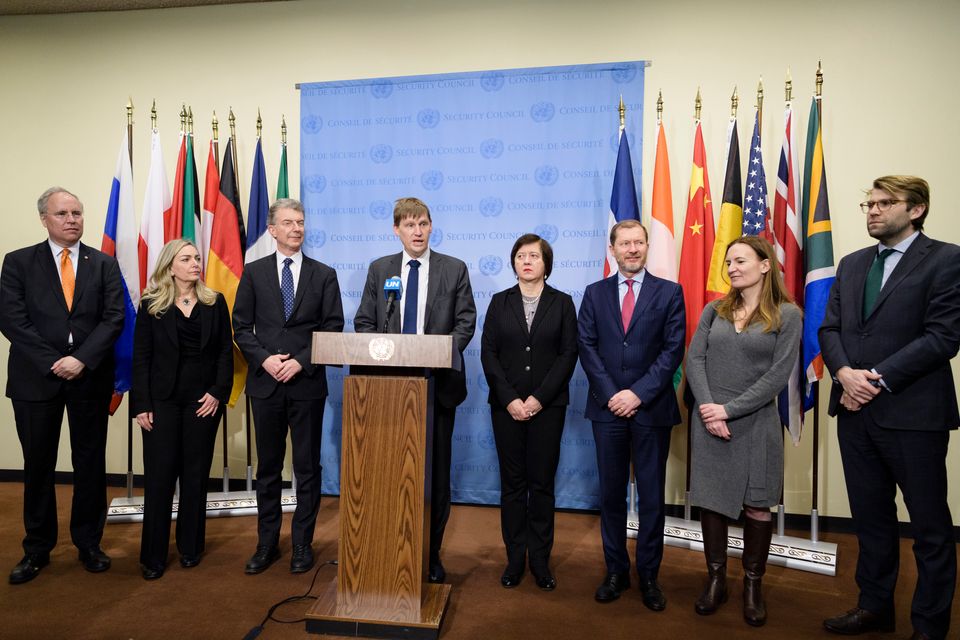 Thank you Mr President and may I also thank all of our briefers. Mr President, the Russian Ambassador spoke at length and in colourful and imaginative language about many other actors as he introduced this topic but he said nothing about Russia’s role. The German Ambassador – an eyewitness to Minsk -showed us why with his accounts of the events of the time and Russia’s actions.

Mr President, the United Kingdom welcomes this opportunity to discuss the repeated violations of Ukraine’s sovereignty and territorial integrity at the hands of Russia. Russia’s aggression towards Ukraine is not limited to the Donbas and Crimea – Russia seeks to undermine Ukraine at every opportunity; undermining the ceasefire; supplying the Russian-backed separatists with weapons and calling illegitimate elections- all in breach of the Minsk agreement. These actions have a tragic impact on the lives of Ukrainian civilians. As the French Ambassador said: in the five years since this conflict began, over 12,800 people have lost their lives. Almost 25,000 have been injured. And 3.5 million people are in need of humanitarian assistance. Russia bears a heavy responsibility for the ongoing loss of life.

Despite the parties recommitment the ceasefire on 29 December, violations are increasing and that continues to be military activity in the disengagement zones. However, our understanding of the situation within non-government controlled territory is limited because the OSCE Special Monitoring Mission is unable to carry out its mandate. It is unable to do so because of Russia’s repeated refusal to support the Special Monitoring Mission. This threatens the ceasefire and ultimately the security of Ukraine and the wider region. A raft of incidents that Russia is yet to provide an explanation for, only reinforces this conclusion. For example, the downing of an SMM long range UAV near the Ukraine-Russia border, outside Ukraine government control last year. And just last week, SMM twice observed the Russian electronic jamming system ‘ZHITEL’ in the Donbas. I would ask the Russian Ambassador to ensure his country’s support for the Special Monitoring Mission and to allow them to observe. I ask what people have to hide?

Mr President, a further example of Russian attempts to destabilise Ukraine is the illegitimate elections in the non-government controlled territories of the so-called Luhansk People’s Republic and Donetsk People’s Republic in the Donbas last November. This represents a clear breach of the Minsk agreements and unnecessarily increases tensions. Russia could use its considerable influence on the Russian backed separatists to encourage them to comply with them its commitments. Instead Russia fuels the conflict by supplying weapons and personnel to the armed formations.

Mr President, next month marks the fifth anniversary of the illegal annexation of Crimea by Russia. And it’s worth reminding ourselves of the facts. In response to Russia’s plans for an illegal and illegitimate referendum in Crimea. The Security Council on the 15th March 2014 voted on a draft resolution that reaffirmed the sovereignty, unity and territorial integrity of Ukraine and noted that Ukraine had not authorised the referendum and that it had no validity. Russia vetoed that resolution. Following the illegal and illegitimate referendum in Crimea on 16th March, on 27th March 2014, the United Nations General Assembly adopted Resolution 68262 supported by one hundred member states which affirmed the General Assembly’s commitment to the territorial integrity of Ukraine within its internationally recognised borders and underscored the invalidity of the referendum.

Mr President, we not only object to the illegal annexation of Crimea because it is illegal. We also object to it due to the Russian government’s appalling treatment of many of those who live there. Human rights violations are prevalent. Ethnic and religious groups such as the Crimean Tatars are persecuted. Mr President, despite calls in General Assembly resolutions for the United Nations High Commissioner for Human Rights to visit Crimea, Russia continues to refuse. We, the international community must stand united and call for Russia to release all political prisoners and allow urgent, unrestricted access for human rights monitoring organisations immediately. Again, what does the Russian Federation not want the world to see?

Mr President, less than three months ago, Russian authorities admitted to using force in the Black Sea to seize three Ukrainian naval vessels injuring three Ukrainian servicemen. These actions are not in conformity with the United Nations Convention on the Law of the Sea and they are a blatant attempt to destabilise Ukraine by harming economic activities of other ports of the Berdyansk and Mariupol -hampering Ukraine’s ability to manage its economy. Let me be clear, Mr President, Russia’s actions in Ukraine have no basis in international law. We cannot and will not ignore such actions. They represent a serious challenge to the international rules-based order. This is an order which benefits us all and keeps us safe. To protect it, the international community must continue to stand united and remain focused on Russia’s behaviour and its attempts to integrate Crimea into Russia – including through the construction of a bridge across the Kerch straits.

I would like to end by reiterating the United Kingdom’s full support for Ukraine’s independence, sovereignty and territorial integrity – including within its internationally recognised borders and territorial waters. We look forward to discussing the situation in Ukraine further at the forthcoming General Assembly debate on 20th February. And I take note of the Russian Ambassador’s enthusiasm for Security Council meetings on Ukraine and look forward next time to hearing about what Russia is doing to meet its obligations and bring an end to the suffering of the people of Ukraine. Thank you, Mr President.