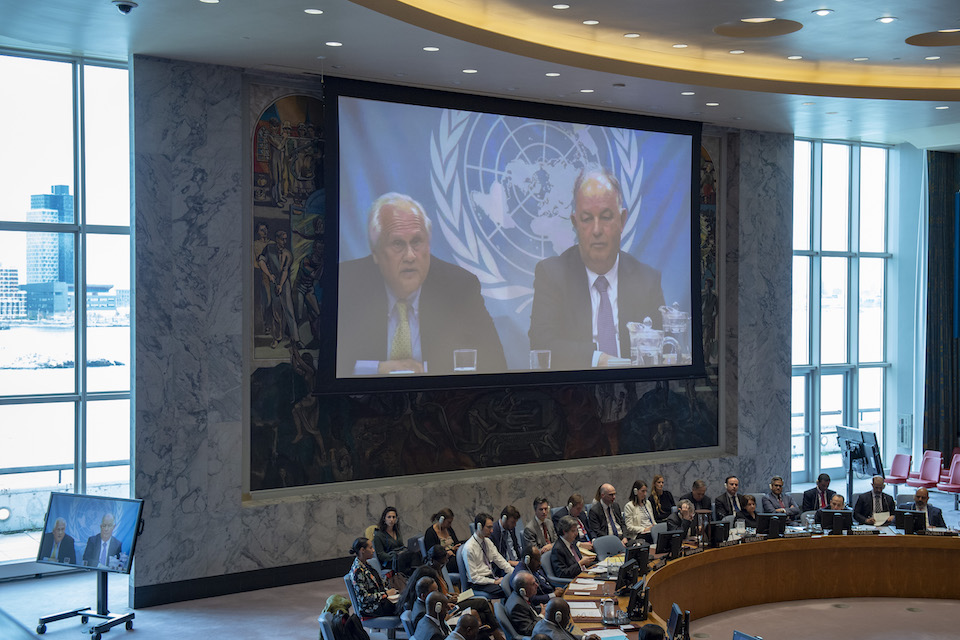 Mr President, it’s important that Ukraine is regularly discussed here in this Council. Ursula Mueller told us that the leading cause of death of children in Ukraine is from landmines and that is a grim reminder of the real impact of this ongoing conflict, as also set out by our briefers from the OSCE.

Thirteen thousand people have died. Thirty thousand have been injured. Three and a half million are in need of humanitarian aid in this modern conflict in Europe.

Mr President, why are we here? We are here because Russia sent troops to Crimea and later grabbed it after an illegitimate pretence of a referendum, held at the barrel of the Russian gun. Russia’s actions were clearly illegal. One hundred Member States agreed in a GA resolution in March 2014 and not one country around this table voted with Russia. Russia sent troops and supported separatists in eastern Ukraine and continues to destabilise those regions with devastating humanitarian consequences. Russia attacked Ukrainian ships in the Sea of Azov last year and continues to impose daily restrictions on vessels in a blatant attempt to destabilise Ukraine’s economy. All those who care about the territorial integrity of Member States and the principle of non-interference should ask Moscow to stop interfering in its neighbour and to get off its territory. We therefore condemn President Putin’s recent decision on passports, which is further evidence of Russia’s aggressive actions to destabilise Ukraine and undermine a security sovereignty and territorial integrity.

Rather than creating further obstacles to the reintegration of these communities into Ukraine, Russia should focus on implementing the Minsk Agreements, endorsed by this Council, on ending its support for armed separatist formations and on ensuring the safe delivery and distribution of humanitarian assistance by international agencies. This is the only way to end the fear and suffering of ordinary people in eastern Ukraine.

Mr President, last month was the fifth anniversary of the illegal annexation of Crimea by Russia. Apart from the illegal seizure of Ukrainian land, infrastructure and economic assets, the Russian authorities have run illegitimate elections and imposed Russian citizenship, Russian law and military conscription on the population in this part of Ukraine. We’ve seen an increase in the persecution of ethnic and religious groups, such as the Crimean Tatars, including the unlawful detention of 23 Crimeans following recent raids on their homes. There are continuing reports of arbitrary detentions and arrests and forced disappearances and torture against political opponents and minorities. Seventy three political prisoners are currently being held in Crimea and in Russia. It is unacceptable that the Russian Federation has not cooperated with calls by the UN General Assembly to allow access for the UN High Commissioner for Human Rights.

Mr President, I would like to extend my congratulations to Vlodomyr Zelensky on his Presidential election success. The peaceful election process is a testament to the development of Ukraine’s democracy and an example to some of Ukraine’s neighbours. As my Prime Minister stated, we look forward to working with Mr Zelensky. The Russian Federation have an opportunity to show willingness to work with the new President and to reduce tensions, to bring calm, to work for peace. Sadly, instead, Russia has continued down its aggressive path.