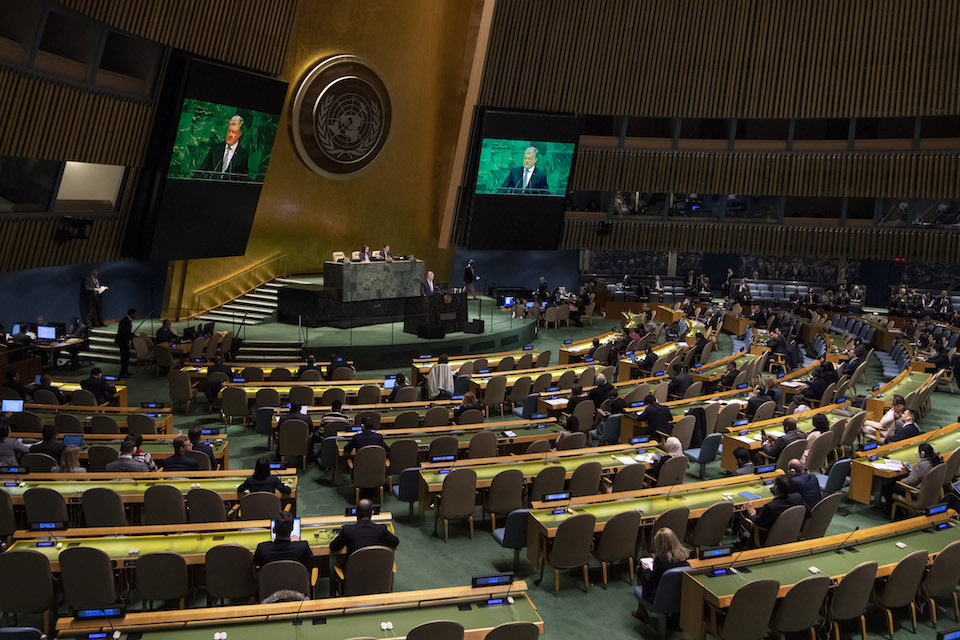 Thank you very much Madam President,

We welcome this debate and the opportunity to discuss the situation in Ukraine. I would like to start by joining those colleagues who reiterated the unwavering support to Ukraine’s sovereignty, independence and territorial integrity, including within its internationally recognised borders and territorial waters.

Today marks the annual commemorations of the lives sadly lost during the 2014 Euromaidan protests. We offer our deepest condolences to the families of those who lost loved ones.

Today also marks the fifth anniversary of the beginning of the Russian military operation to illegally annex Crimea from Ukraine.

Madam President, last week my Russian colleague stood with Foreign Minister Arreaza and pledged to defend the UN Charter, this included ‘respect for the sovereign equality of members’ and ‘respect for the territorial integrity and political independence of all states’.

However, the forcible Russian seizure of 10,000 square miles from Ukraine broke the first principle of international law: that countries may not acquire territory or change borders by force. It also violated a number of international agreements and commitments, including; Article 2 of the United Nations Charter, the Helsinki Final Act, the Budapest memorandum and the 1997 Russia-Ukraine Treaty of Friendship.

The General Assembly reacted to Russia’s actions by passing resolution 68/262 on 27 March 2014, affirming the territorial integrity of Ukraine – within its internationally recognised borders and the absence of any legal basis to change the status of Crimea.

As my German colleague said earlier, in another context in the Security Council, to listen to the Russian account of what happened in Crimea, one would think it was Ukraine that had invaded Russia. And not the other way round.

We do not only oppose the illegal annexation because it violates international law, we oppose it also because of the serious human rights violations Russia continues to commit in the Crimean peninsula. This includes the widespread persecution of ethnic and religious groups such as the Crimean Tatars and those who express opposition to the illegal annexation of the peninsula. In detention centres, these victims have been mistreated and tortured to punish or to extort “confessions”. It is no coincidence that Russia continues to ignore calls in General Assembly Resolutions for the High Commissioner for Human Rights to visit Crimea.

Only three months ago, the Russian Federation used force to seize three Ukrainian naval vessels and took 24 servicemen captive – including three who were severely injured during the incident. Russia’s use of force, including use of firearms against Ukraine’s vessels, constituted clear aggression and escalation. These unacceptable actions are not in conformity with the United Nations Convention on the Law of the Sea, and they have no basis in international law.

We cannot and will not ignore such a serious challenge to the international rules based order. We call on the international community to continue to stand united and remain focused on Russia’s behavior and attempts to consolidate its illegal annexation of Crimea.

Turning to eastern Ukraine, the conflict there remains volatile, fueled by Russia’s total disregard for Ukraine’s sovereignty and territorial integrity. Russia has incited and then supported military activity by armed formations, including through the deployment of Russian troops into Ukrainian territory. Russia’s refusal to allow the OSCE Special Monitoring Mission to carry out its mandate within non-government controlled territories gives the impression she has something to hide and it threatens both the security of Ukraine and the wider region.

Russia’s concerted campaign to destabilise Ukraine includes its support, last November, for illegitimate elections that do not represent the will of the people in the non-government controlled territories. Such action unnecessarily fuels tension between parties to the conflict. Moreover, it is a clear breach of the Minsk Agreements.

As with all conflicts, it is sadly the civilians that suffer the most. Since the fighting started, over 10,000 people have lost their lives, almost 25,000 have been injured, 3.4 million are in need of humanitarian assistance and there are around 1.5 million internally displaced persons.

Ukraine’s crisis is not a frozen conflict. Russia created this conflict and, rather than use its considerable influence to ensure Russian-backed armed formations comply with their Minsk commitments, Russia continues to supply weaponry and personnel to these armed formations. Russia needs to withdraw its military personnel and weapons, cease its support for the armed formations and abide by the Minsk Agreement commitments she signed up to. This would be a much more convincing way to demonstrate commitment to ‘the principles of the founding charter that governs the behaviour of the international community’ than by giving a press conference.

The United Kingdom once again calls on the international community to stand united behind Ukraine and oppose Russia’s continued attempts to destabilise another Member State of the UN, undermine her sovereignty and steal her territory.