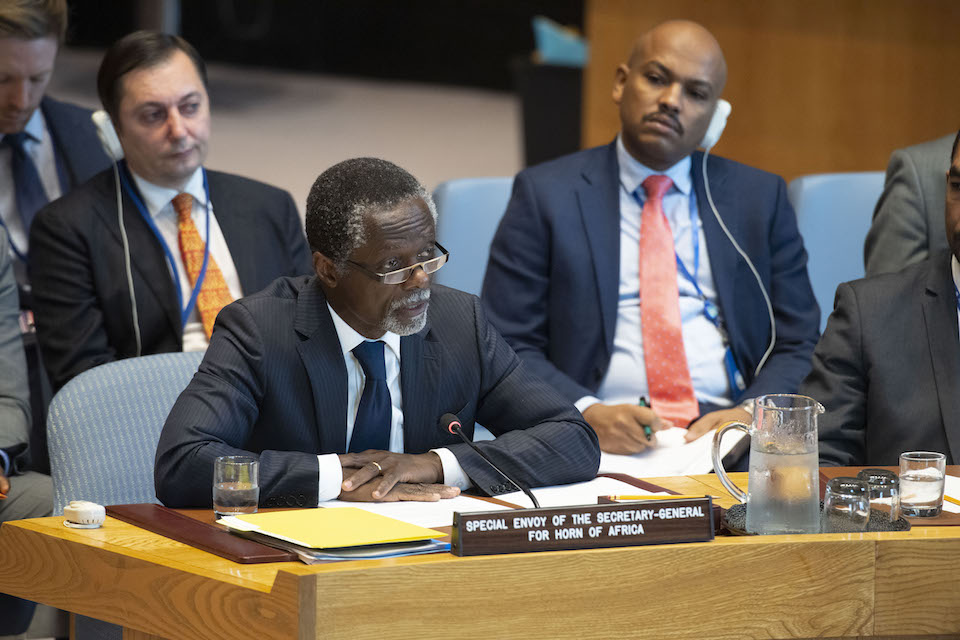 Thank you, Mr President, and let me begin by offering a warm welcome back to the Council to Special Envoy Onanga-Anyanga. We look forward to working with you on this very important topic.

Mr President, I think we agree this is a very complex issue. It also strikes me that this is an interesting time to be discussing this issue, given the major upheavals in Sudan that the Special Envoy has referred to, and we share his view that it is absolutely vital for the Sudanese authorities and for the Government of South Sudan to continue to cooperate despite what’s been happening on the ground and to implement their agreements in relation to the border. I also agree very much with the tone set by both of our briefers today on recent developments. There is much to welcome over the last six months. Overall the security situation in Abyei has remained generally calm despite sporadic instances of violence. And we should welcome also the improved cooperation between the Government of South Sudan and the authorities in Sudan and the progress made against the JBVMM benchmarks.

However, we continue to have two major concerns. First, we share the concerns expressed today by USG Lacroix over intercommunal tensions and the political rhetoric and criminality which exacerbates these tensions. This remains the largest challenge to stability and we think that UNISFA’s support for local mediation, for community protection and for judicial initiatives remain absolutely vital, as does full deployment of UNISFA’s police assets. And on this issue, like Kuwait and the United States, we remain very concerned about delays in the issuing of visas for key personnel, especially for the Jordanian technical reconnaissance delegation. We urge the Sudanese authorities to issue those visas without delay. And perhaps if I can ask a question to our Sudanese colleagues: in your intervention today, we would be grateful if you could give us an update on the issuing of these visas.

Our second concern is around the issue raised by the ambassador from Peru and that’s about the humanitarian situation in Abyei, which, as he said, has been caused both by rapid inflation but also by the economic crises in both countries. The UK is providing $40 million this year in emergency humanitarian support to help Sudan’s most vulnerable and excluded communities and to help them with their basic food and health needs. And we would urge all UN Member States to assist in this regard.

And then finally turning to the question of UNISFA’s upcoming mandate renewal. We commend the really important work that UNISFA is doing on the ground, particularly with regard to mediation between the different parties. And we therefore support the recommendation for a six month mandate renewal. We agree, however, with those Council members who have said that the mission does need to adapt to the situation on the ground and therefore we support the recommendation on enhancing the mission’s civilian component – in order to help with its support to the AU Commission and AU High Level Implementation Panel.

The need for mediation and humanitarian assistance in Abyei

International Affairs No reconstruction assistance without a credible p…
0
✖