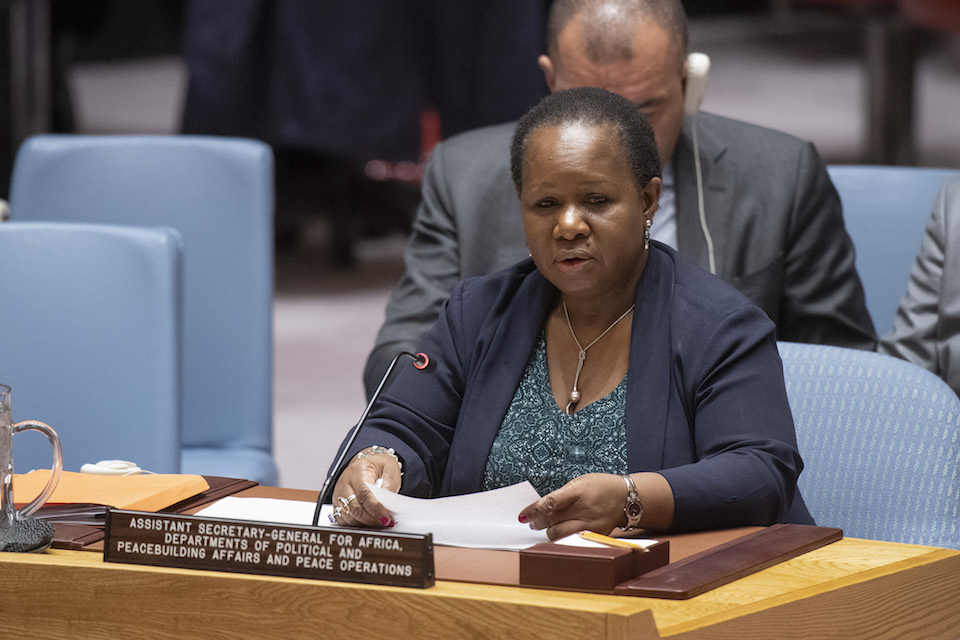 First let me begin by thanking Assistant Secretary-General Keita for your briefing on your visit and on the latest developments on the ground.

Mr President, I will focus my remarks on three issues today: the situation in Darfur, the transition and the broader situation in Sudan.

First, on the situation in Darfur, the United Kingdom welcomes the extension of the unilateral cessation of hostilities by the SLM Minni Manawi, the SLM Transitional Council and the Justice and Equality Movement until 8 May 2019. We also welcome the open-ended cessation of hostilities announced by the government of Sudan. Despite this, we are concerned by ongoing violence in the Jebel Marra region between the government of Sudan and the SLA Abdul Wahid, including reports of retaliatory attacks on civilians, the destruction of property and the displacement of significant numbers of civilians. As we have registered many times before in this chamber, we also continue to be deeply concerned by ongoing intercommunal conflict and widespread human rights abuses and violations – in particular, the prevalence of conflict-related sexual violence. In this regard, we urge the government of Sudan to ensure justice and accountability for survivors and to engage constructively with the Office of the SRSG for Sexual Violence.

Second, Mr President, turning to the transition from peacekeeping to peacebuilding and development, we welcome the progress made to date with UNAMID’s drawdown. If Darfur is to transition successfully and sustainably away from peacekeeping not only does armed conflict need to cease, but the root causes of the conflict must also be addressed. As ASG Keita has just mentioned, the benchmarks, as set out in the Council’s December Presidential Statement, are crucial in this regard. The United Kingdom calls upon the government of Sudan to commit itself fully to making progress towards the achievement of these benchmarks to demonstrate their commitment to addressing root causes in Darfur and to lay a foundation for sustainable peace building and development. Given a substantial peacebuilding and development needs, as well as the ongoing humanitarian need in Darfur, it is also extremely important that this Council has a clear and accurate account of the situation on the ground. We therefore encourage the Government of Sudan to cooperate with the relevant UN entities on the ground to ensure an accurate depiction of the situation in Darfur in order to ensure peacebuilding, development and humanitarian efforts are adequately resourced.

Third and finally Mr President, given recent developments, I would like to touch on the broader current situation in Sudan. The United Kingdom is deeply concerned about President Bashir’s announcement of a state of emergency last Friday, which gives sweeping new powers to the security services and goes against the recommendations of the previous national dialogue. The protests that have been taking place across Sudan are peaceful and demonstrate the expression of legitimate grievances. Individuals have a right to set out their views. Additionally, several opposition political leaders, activists and journalists remain in prison – some for over two months now. They should be released immediately. The proposals made by President Bashir in his speech on Friday will not help bring about the political consensus needed to stabilise the country. In the current environment, it is difficult to see how the proposed national dialogue can therefore be a success. The political instability in Sudan – and the declaration of a state of emergency – naturally affects the situation in Darfur. The United Kingdom has been deeply concerned by the violations committed by government security services during the recent protests – the very services UNAMID is supposed to be handing over security and protection responsibilities to in Darfur. President Bashir’s announcements and the conduct of the security services will not only further delay the agreement of a sustainable peace deal, but they also call into question the government’s commitment to delivering progress on human rights, the rule of law and security sector reform, which are so desperately needed in Darfur.

In conclusion, Mr President, the United Kingdom will continue to closely monitor the situation in Darfur and wider Sudan. We continue to urge the government of Sudan to embark upon the political and economic reforms necessary to deliver true stability and will continue to work with the members of this Council to ensure the necessary support to the people of Sudan. Thank you.