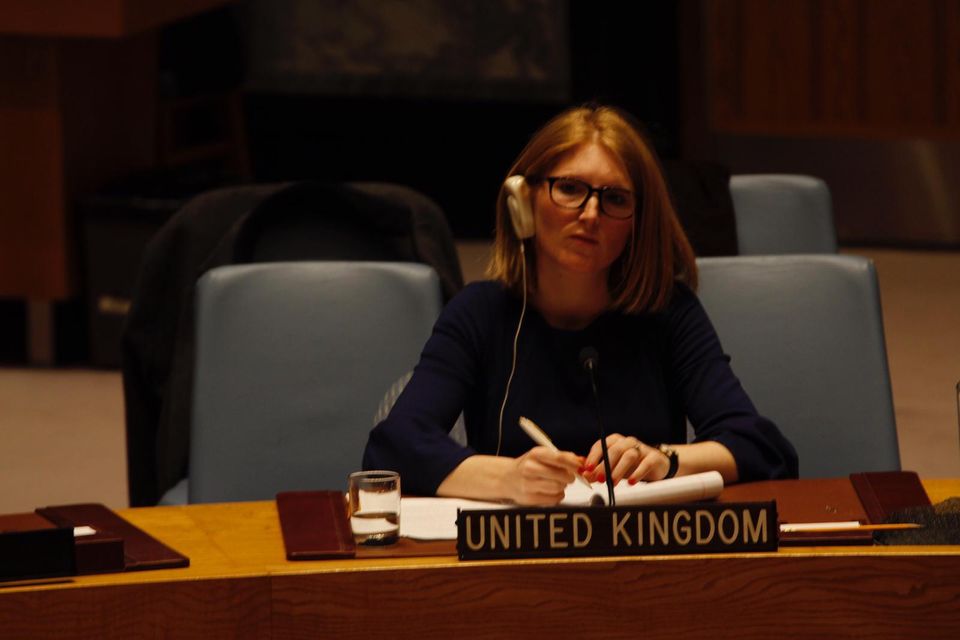 Thank you, Madam President and thank you SRSG Shearer and Ms. Jial for your briefings.

Today, on International Women’s Day, I’d like to focus on the devastating impact that the conflict in South Sudan has had on women and girls. In five years of fighting, the conflict has claimed nearly 400,000 lives, driven 4.3 million people from their homes and 1.4 million to the edge of famine. And as we have heard from you today, Ms. Jial, it is often women and girls who have borne the brunt of the violence. Women, including those in their 60s and girls as young as eight, have been subjected to brutal acts of rape and sexual assault. Yet despite the depth of the horror, time and time again perpetrators are not held to account. This impunity drives the cycle of violence.

Despite the signing of a Peace Agreement in September and the welcome reduction in political violence, there has been a concerning uptick in intercommunal violence and sexual violence.

We are particularly concerned by the recent UN reports warning of the normalisation and persistence of conflict-related sexual violence perpetrated by fighters from all sides including armed militia groups that have been mobilised and used by the parties in recent offensives and frequently, directly or indirectly, encouraged by Commanders. Despite calls for the Government of South Sudan to take action to identify those responsible and hold them to account, this has not happened. Instead, in some instances, the organisations that provide support to the victims have come under attack by the Government.

We cannot accept these brutal acts committed against mothers, sisters and daughters and we cannot allow impunity to persist. So on this day above all, and on each and every day, in order to support a lasting peace we call for an end to the pernicious use of sexual violence and the culture of impunity in South Sudan. We call on the Government to uphold its responsibilities to protect civilians, and to thoroughly investigate all instances of sexual violence and bring those responsible for these crimes to justice. And we must all support organisations to help survivors as Ms. Jial has suggested and continue to exert pressure for accountability, whether through national courts, the Hybrid Court, or through international sanctions.

But I do not just want to focus on the disproportionate impact of the conflict on women and girls. It is also important to focus on the crucial role women have to play in delivering a sustainable peace. The United Kingdom has consistently pressed for greater inclusion of women in political and peace processes, and we welcome the contributions of brave civil society actors, including those present today. We welcomed the commitments made in the September Peace Agreement to at least 35% executive representation. But this has not yet translated into action, and we call on the parties to deliver on their promises. Not for some abstract concept of quotas, but because we know that when women meaningfully participate in peace processes, the resulting agreement is more likely to last.

We are grateful that Ms. Jial has been able to join us today. Civil society has played a vital role in the peace process by representing the views and voices of the people of South Sudan, and we support your call for greater engagement with these communities. We are therefore concerned that the space for civil society continues to shrink, and we encourage all parties to engage in open dialogue with civil society organisations, particularly those representing women.

Finally, it is important to register that this Secretary-General’s report is the last 90-day report before the May transition date envisaged in the September Peace Agreement. We welcome the progress made to date and reductions in overall violence as set out by SRSG Shearer. The UK remains committed to supporting those working towards peace. But like the SRSG, we are concerned by the lack of progress on some of the most difficult issues alongside increases in intercommunal and sexual violence.

Conflict is the main driver of South Sudan’s man-made humanitarian and protection crisis. Peace is the only solution. It is vital that the Security Council, the region, and the parties to the conflict do not allow this loss of momentum to persist and to destroy the hope of progress that September’s agreement brought. We urge all parties to bring renewed momentum to ensure the deal is implemented in full. We must work together or risk failing to deliver a future free of violence, for the people, including women and girls, of South Sudan.