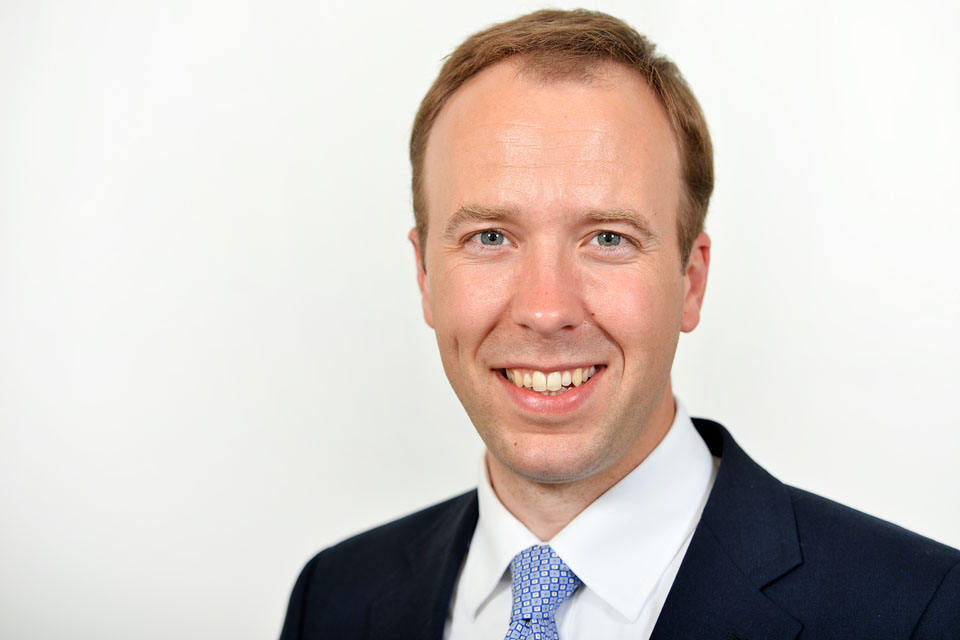 I’m here at the Royal Society, perhaps the greatest institution of Enlightenment values in the world.

The Royal Society has supported progressive human endeavour for 350 years, from Wren, through Newton to Einstein and Hawking.

And celebrate the world-leading achievement of the 100,000 Genomes Project.

100,000 whole genomes that have been sequenced to help diagnose and treat rare diseases.

So many families closer to a cure or a treatment.

And I know some of those families are here this morning. Renewed hope. Not feeling alone, but part of a community.

With the knowledge their genetic data has helped others.

That impulse to help others: someone we’ve never met before, someone we’re probably never likely to meet, caring about the fate of a stranger.

I talk a lot, as Health Secretary, about the need to harness technology to improve and save lives.

This past week, that’s been brought directly home to me.

I wanted to find out whether I was at high risk of any diseases, and how it would make me feel.

I was really looking forward to it. The process was simple and easy: spit in a tube, send it off. I waited a couple of weeks while my sample was analysed by a team at Oxford University.

On Friday, I got the results. And I have to admit, I started to feel pretty nervous.

It struck me that I was about to find out how likely I am to get 16 serious diseases.

I’d already chosen only to get tested for diseases I could do something about.

Even so, it’s a big moment.

First, they told me the good news. For most of the diseases, my risk was below average.

I’m in the 3% of the population with the lowest genetic risk. Maybe that’s why Grannie lived to 103.

Then the bad news. The test also showed that, despite no family history, I’m in the worst 20% for prostate cancer.

I have around a 50% higher risk than average.

I was obviously worried when I was first told this.

But while it’s not good news, it’s good news to have.

Death from prostate cancer is more treatable if diagnosed early.

But prostate cancer can be a silent killer, and tragically, so many men don’t find out until it’s too late.

But it doesn’t have to be.

It may sound weird but I’m now absolutely delighted.

I’ve already booked a blood test, and obviously I’ll be on alert as I get older.

I’m going to make certain I don’t miss any screening appointments in the future.

I also found out an important lesson: it really matters how the results are presented.

You need an expert to help you make sense of the data, and you need a clinician to tell you what it means medically.

And the reason it’s so important is that predictive genomics is not about absolutes. It’s about risk factors. And your genes are only one part, and usually not even the biggest part, of the risk.

Even more important, we’ve got to be crystal clear about the different role, different science and different ethics between predictive, polygenic tests like this and diagnostic whole genome sequencing.

I believe both have a huge role to play in the future of healthcare, but they are very different.

By using predictive testing we can help people at higher risk earlier.

I see it as a game-changer for cancer screening in the NHS, and I’m determined that we harness this technology to save lives.

So for me, it’s personal that we’re writing the first National Genomics Healthcare Strategy, which my brilliant Lords Minister, Baroness Blackwood, is developing.

I’m delighted Nicola has consented to my sharing her story.

Because Nicola’s life has been changed by genomics too, in a different way to mine.

Nicola has the rare disease Ehlers Danlos. But she wasn’t diagnosed for 30 years, going through test after invasive test from childhood into adulthood, being referred to doctors who each tried to do their best, but without much success.

Until finally, she was referred to a neurologist, with experience of EDS, who recognised the symptoms and was able to diagnose her.

Today, with whole genome sequencing Nicola could have been diagnosed within a couple of weeks.

Her story shows the power of the other type of genomics.

For rare diseases, whole genome sequencing is life-changing because it is a diagnostic test of absolute certainty, and early diagnosis can have a massive, immediate impact on improving someone’s chances.

So many people have felt there’s no way forward if they have a rare disease. That’s why whole genome sequencing has been so revolutionary – and it holds the key to unlock new cures and treatments.

Imagine you discover you have a single gene disease that can be inherited.

Imagine the impact not just on that person but their children.

The positive potential on people’s lives is massive.

But the sensitivity of that information is so acute.

To make all this happen, there are 3 areas I want to address today, each vital to success.

First, rolling out the science.

I’m very proud we lead the world in genome technology.

This year we’ve started our Genomic Medicine Service within the NHS, and we have a new ambition of sequencing one million whole genomes, and 5 million partial genome tests like the one I’ve had done.

Our science budgets are growing, and rightly so.

And we’ve got to get the data rules right.

After all, genomic sequencing is really just revolutionary amounts of data.

It’s why I’m so frustrated at data blockage.

We can’t currently test for all cancers, because too often, the data is locked away.

Sometimes there are good ethical or scientific reasons, and strong privacy rules are vital.

But it’s outrageous that too often, anonymised data, paid for by taxpayers, donated by the public, can’t be used for research.

We will unlock that data because we know it saves lives.

Second, getting the ethics right.

Understanding the human genome raises profound new ethical questions, and we need to get the ethical rules right, both for diagnostic and predictive genomics, and even more so when it comes to the emerging science of editing the human genome.

We’ve already made some progress here, when in October we updated the Code on Genetic Testing and Insurance to ensure people don’t wrongly have to disclose their genomic data when they take out life insurance.

For diagnostic genomics, the area most in need of ethical rules is how, and with whom, information is shared.

When it comes to editing the human genome, that raises major new ethical questions.

I don’t believe in a blanket ban on genome editing research.

Not when it offers the hope of tackling terrible genetic diseases.

But I fully understand, and recognise the real and genuine concerns and fears, that people have, and we must put in place an ethical framework to govern it.

These are just some of the vital ethical questions that we need to address together as a society.

After all, the reason we care about the science is so we can improve and save lives.

Science is founded on the noble Enlightenment principle of progress driven by rational inquiry and objective reality.

But we need to take people with us.

Proving something scientifically true is not the same as proving to people that it’s a good thing.

We must listen to concerns.

We need a clear framework so that we, as a society, can make active choices over how the science is used.

I think our ability to do that in this country is one of our hidden strengths.

We often talk about how we are world-leading because of our universities, our open, outward-looking culture, our environment for enterprise.

But we are also world-leading in developing the ethical framework within which science can be applied with confidence.

And we build the institutions that make it real.

We reject the laissez-faire approach of some, and the authoritarian instincts of others.

Instead, we apply liberal values: open, enquiring yet sceptical, and with a firm focus on the benefit of mankind.

For Britain, ethics is a competitive advantage.

That is how Britain has forged our leadership role in so many areas of innovative science over the years, and we must do so once again.

The third thing we need to get right is operational.

I’m delighted we are taking up genomics in the NHS. The new Genomic Medicine Service is a world first.

And I’m very excited that the new £100 million children’s hospital we’re building in Cambridge will mean we can do even more to identify and treat children with rare diseases through whole genome sequencing.

But there’s more to do.

How do we train up doctors and nurses so they understand genetic data, including these new predictive tests, and are able to explain it in a way that helps people make the best decisions?

And we can’t just ignore it.

After all, thousands of people are already taking predictive tests, and many are now turning up at their GP surgery with their results in hand.

We need to harness the power of this new technology to diagnose and prevent illness, and that means using it right.

Some people say we shouldn’t encourage the ‘worried well’.

I feel that’s the wrong response.

We need to understand that people will have genuine concerns and we must give them the help and support they need to make sense of their genetic data.

Of course, that also means supporting our GPs and frontline clinical staff. We must get the right numbers in place – we now have record numbers of GPs in training, and we’re putting in the biggest rise in primary and community care in a generation.

If we encourage people to take better care of themselves, that means patients and clinicians, together, can prevent problems from arising.

This will save the NHS time and money in the long term.

Genomic medicine is set to revolutionise the prevention, diagnosis and treatment of many of the UK’s most devastating diseases…

Identifying someone’s genetic risk could lead to more personalised treatments that might stop a disease ever developing.

And I feel that very strongly, because I’ve now personally seen the potential benefits.

And this isn’t just about physical health, but mental health. For some people there will be a big psychological impact from finding out news they weren’t prepared for.

We already provide support and counselling to people, but we must ensure that provision keeps pace with the expansion of predictive testing.

Get all this right and I’m certain we can build consent and trust, and put genomic science on the strongest possible footing.

One of your esteemed Royal Society fellows, Bertrand Russell, once said:

To conquer fear is the beginning of wisdom.

Fear is the enemy of progress.

The Enlightenment – science and reason, allied with a mission to help people – led to the biggest ever leap forward for humanity.

We need to renew that spirit of progress.

And I believe we can defeat fear by building trust.

Caring about technology, because we care about people.

A noble mission for us all.

We must tackle the serious ethical challenges of DNA analysis

Health Healthcare advice for UK travellers in the event …
0
✖