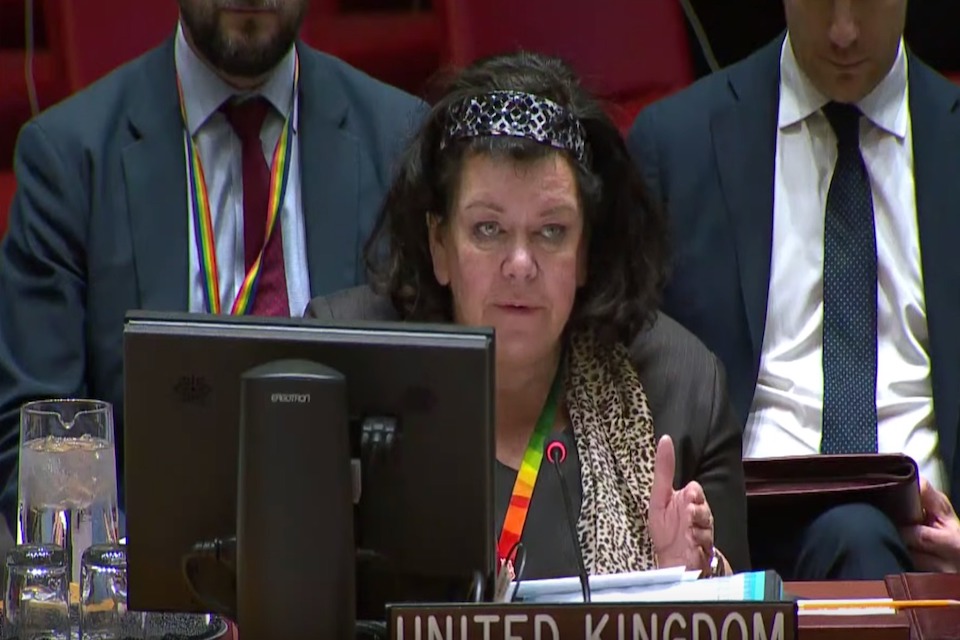 I think the worst nightmare on Idlib has come to pass. As Mark just told us, the UN have been warning of this day for a long time and this is in an environment where nightmares happen 24/7. Idlib has long been, if you like, the refuge of last resort for all those people who had to flee the attacks on Aleppo and elsewhere. And now, having thought they were safe in Idlib, they find themselves under even greater attack.

As my foreign secretary has said, this is a vicious campaign of attrition and it continues to force civilians to flee by targeting their schools, hospitals and emergency first responders. And we condemn the repeated flouting of international humanitarian law. Mark explained that millions of people now face a protection crisis.

Now we know that an investigation by the UN Board of Inquiry is underway into why deconflicted sites have been targeted. And we heard the figures for those sadly killed in January, including airstrikes that put out of action Al-Shami Hospital, which was the last remaining surgical hospital serving southern Idlib. And since 1 December, the continued onslaught from Syrian forces by Russian and Iranian forces has displaced over 550,000 people. And to put that in context, it’s more than the entire population of Sochi.

Turkey has made efforts to seek a peaceful solution in Idlib and to prevent millions more Syrians having to seek refuge. But we’ve seen the Syrian authorities frustrate and ignore the Memoranda of Understanding. Multiple ceasefires have been broken often and they are violated as quickly as they are announced after one or two days. Geir outlined the attacks that we’ve seen in the last few days that led to Turkish fatalities and increased the risk of a further regional conflagration. And we’re deeply concerned at the impact of this escalation on Turkey, who are already hosting over three and a half million refugees who have fled the repression in Syria.

So, Mr President, the UK, along with France and the United States, called this meeting so that we can once again call for an immediate, genuine and lasting ceasefire in Idlib and for a lasting solution to the situation there. Both of the UN representatives briefing today have stressed the imperative of this. And we’ve heard a lot of superlatives today, including what Mark described as the largest single allocation from the surf since the war began. How many more imperatives, Mr President, are we going to need before the Syrian authorities commit and stick to a ceasefire? I think it would be very good if the Syrian representative, when he gives his intervention, could explain why not a ceasefire and why not stick to the ceasefires that have been agreed already. We never get, Mr President, a very clear answer to that question. And yet the numbers of people, including children who are suffering from current Syrian policies, continues to rise.

Mr President, council members have said time and again that the only sustainable way forward for Syria is a political solution and a resolution 2254. The offensive being perpetrated in Idlib and the failure of multiple ceasefires only serves to underline that it’s the UN and this Security Council and not the Astana format, which should remain the guardian of this process. And our absolute priority should be a sustainable solution in order to address humanitarian disaster in north-west Syria. And Mark has set out exactly what that means in terms of numbers.

But I’d also like to use this opportunity to encourage the Secretary-General to consider if the UN, beyond the critical humanitarian role it’s already playing, if the UN can assist in any way in achieving a lasting ceasefire. As Security Council members, the United Kingdom stands ready to support any UN-backed agreement. For the record, we continue to support the Special Envoy’s work on the political process and encourage him to pursue all of the elements under Resolution 2254.

And as discussed at last week’s humanitarian session, the mass destruction and displacement is already inflicting a terrible toll on the people of north-west Syria. There are over three million people stuck in this ever-reducing pocket, with a population density greater than that of the Gaza Strip. The UK is already providing over $50 million in humanitarian assistance to north-west Syria this financial year, and we’re looking at what more we can do to help. We have spent over $3 billion to help Syria since the conflict began. And I would like the Syrian representative to explain why the conflict is continuing when it is hurting so many of his own people.

Finally, Mr President, I want to close with a tribute to the UN, both on the political side and on the humanitarian side, for the work that they do in these terrible circumstances and without the necessary assistance from the host government.

Stressing the imperative of a lasting ceasefire in Idlib