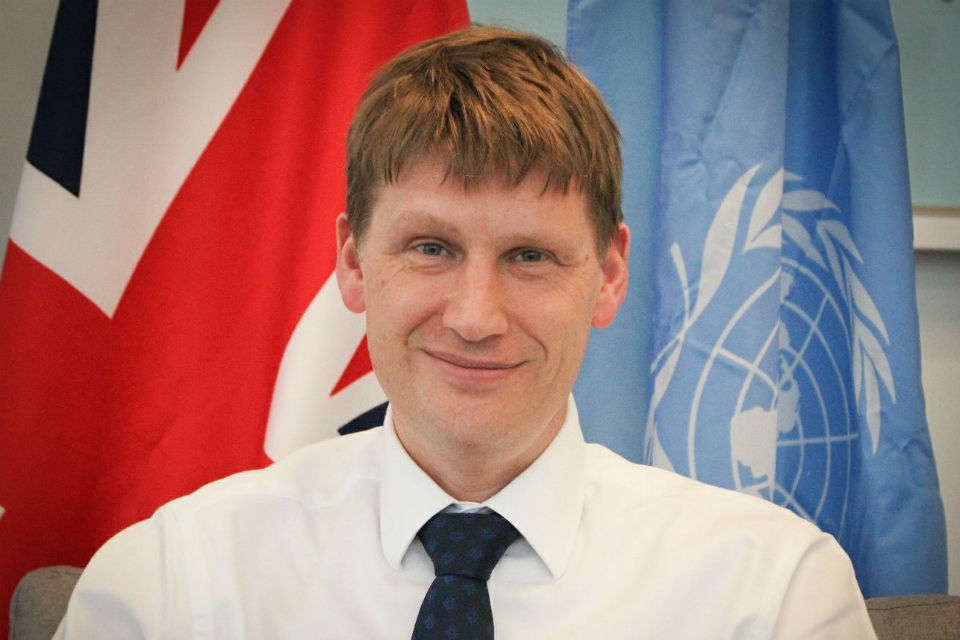 Thank you very much Madame President. Let me congratulate you on taking up your position. It is good to have a fellow Commonwealth member in the chair.

May I thank High Representative Nakamitsu for her briefing and thank through you the OPCW Director-General for his 85th monthly report and the OPCW Technical Secretariat for its ongoing work implementing professionally and dispassionately the tasks assigned to it by the OPCW Executive Council and Conference of States Parties.

On 8 April 2020, the OPCW Investigation and Identification Team issued its first report. In that report, it found the Syrian Arab Air Force responsible for three chemical attacks in Ltamenah in 2017 in which it used chlorine and sarin. These findings brought the number of chemical weapons attacks for which the UN and OPCW has found the Syrian regime responsible to seven. It was yet further evidence that Syria had retained a chemical weapons stockpile beyond the agreed date of destruction, as well as the intent and ability to produce and use them. It was yet further evidence that Syria’s initial declaration was incomplete and a reminder of the real threat that this posed to Syrians and to the international non-proliferation regime.

In response, in a decision on 9 July 2020, the OPCW Executive Council requested that the Syrian authorities declare the facilities used for the Ltamenah attacks, declare the chemical weapons it currently possessed and to resolve the outstanding issues with its initial declaration. On top of the 6 years Syria has already had to do this, the Executive Council granted an additional 90 days.

It is with great regret that, as confirmed by the OPCW Director-General on 14 October, Syria failed to take the required steps. It is with further regret that that the Syrian regime did not even see fit to respond to the Director-General’s letter notifying it of the action Syria been requested to take.

That failure to comply with the 9 July decision represents yet another failure to comply with the fundamental terms of resolution 2118, the issue before the Council today. In that resolution, we decided that in the event of non-compliance, including the use of chemical weapons, we would impose measures under Chapter VII of the Charter. For the Security Council not to take action would be a dereliction of its duty and undermines its authority. It is incumbent on all of us to uphold the Security Council’s authority under the UN Charter. Syria’s continued non-compliance is a proven threat to international peace and security.

Turning to the Director-General’s monthly report, I want to welcome the ongoing tireless work of the OPCW Technical Secretariat, particularly in light of the limitations imposed by the COVID-19 pandemic.

Regarding the work of the DAT, we welcome that the Declaration Assessment Team (DAT) was able to travel to Syria at the end of September for further consultations and to resolve issues with samples collected in a previous deployment. Regarding the additional information and amendments to Syria’s declaration referenced in last month’s report, we understand that these are still undergoing assessment by the OPCW. We will wait for further reporting from the OPCW before welcoming any progress.

As the monthly report states, Syria’s declaration cannot be considered accurate and complete in accordance with the Chemical Weapons Convention, Executive Council decisions, and with resolution 2118. Further amendments to the Declaration are yet more evidence that the initial declaration was incomplete. I would like to stress once again, Syria needs to cooperate fully with the OPCW and make progress on all of outstanding issues.

I would like if I might to touch on some points raised by the Russian Ambassador. We in the UK are gravely concerned by the poisoning of Russian opposition politician Alexey Navalny with a nerve agent from the Novichok group. I’ll just remind colleagues on the Council that a similar chemical weapon, was used by in Salisbury, UK, resulting in death and severe injury. It is unacceptable that these weapons have been retained and even worse that they have been used. Under the Chemical Weapons Convention, any poisoning of an individual through the use of a nerve agent is considered a use of chemical weapons. And as the Council reaffirmed last November in a Presidential Statement, any use of chemical weapons anywhere, at any time, by anyone, under any circumstance is unacceptable and is a threat to international peace and security and those responsible must be held to account. Russia must urgently conduct a full and transparent investigation into the use of a banned chemical weapon on its territory. We must not allow this behaviour to become normalised. Russia must fully cooperate with relevant institutions, including the UNSC.

I am afraid, Madam President, that it is not difficult to understand Russia’s motives for constantly attacking and seeking to undermine the OPCW.

Syria’s failure to comply with the Chemical Weapons Convention