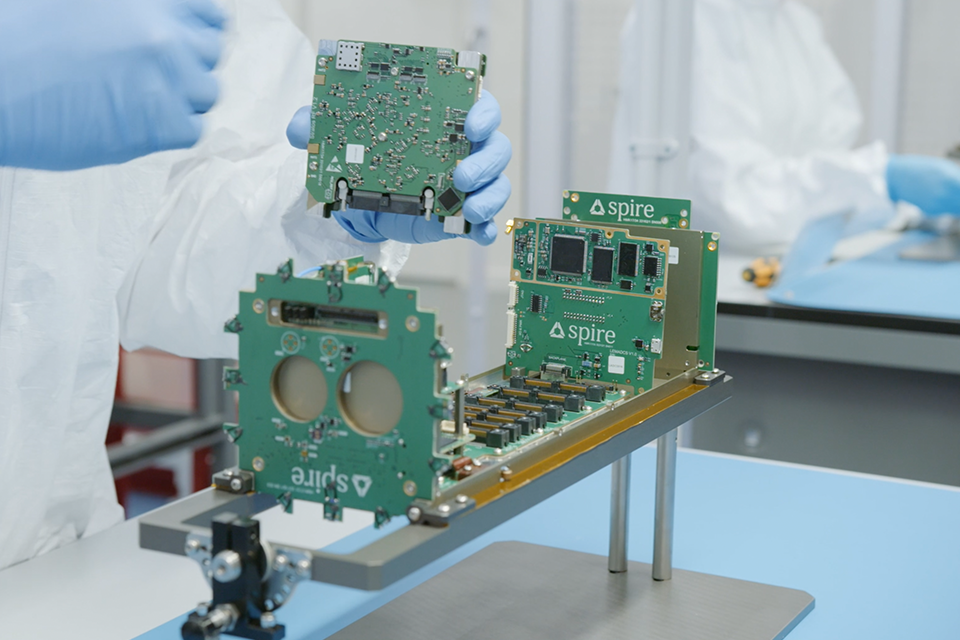 The ‘nanosatellites’, which are built in Glasgow and are no larger than a microwave, have joined a fleet of nearly 100 objects in low Earth orbit that monitor shipping movements, helping predict global trade and making business more cost effective and efficient.

Like mobile phones, satellites are also getting smaller and smarter and nanosatellites are roughly the size of a shoe box. Despite their size, they can do almost everything a conventional satellite does.

Two of the Spire nanosatellites have an onboard supercomputer and intelligent machine-learning algorithms that can provide hyper-accurate predictions of the locations of boats, track their whereabouts and calculate their arrival times at ports, allowing port businesses and authorities to manage busy docks safely.

Two further Spire satellites launched alongside them today, both of which will be used to forge inter-satellite links. These connections allow satellites to act as relays, sending data to one another and down to ground stations, which cuts the time between data collection and its delivery.

Made by Spire Global UK, the nanosatellites, which are some of the smartest satellites ever built in the UK, are backed by over £10 million of investment from the UK Space Agency and took off on a Soyuz launcher at 12.20pm (BST).

While nanosatellites are just the size of a shoe box, they have the power and intelligence of a regular satellite and are driving a revolution in how we observe our planet.

Backed by £10 million of UK government funding, these extraordinary nanosatellites will not only help predict global trade and make businesses more cost effective, but will ensure the UK remains at the forefront of satellite development.

The market for these smaller satellites, which are designed to orbit close to Earth’s atmosphere, is growing rapidly. According to a report by the Satellite Industry Association and Bryce Space and Technology, a total of 292 of the spacecraft were launched into space in 2017, compared with 55 in 2016.

This shift is fuelled by a wave of innovation that has made satellites cheaper to produce and the emergence of new commercial launch providers, such as SpaceX, which have made space more accessible.

The Government is supporting the development of spaceports across the country and the growing launch industry, which will see satellites lifting off from UK soil for the first time in the coming years.

Nanosatellites enable, among other advances, the ability to observe Earth’s environment more completely and regularly than ever before. Recent advances in optics and communication technologies have improved the smaller spacecrafts’ capabilities for remote sensing and imaging.

These nanosatellites will join an orbital fleet of over a 100 that predict global trade movements – aiming to make trade predictions hyper-accurate.

This funding will help to bolster the UK’s role as a leader in space innovation.

Spire staff design and build all the sub-systems and integrate and test the whole spacecraft in the company’s Glasgow headquarters.

The satellites have been developed under a European Space Agency (ESA) Pioneer programme, which is a partnership project co-funded by the UK Space Agency. The UK  remains a leading member of ESA, which is independent of the EU.

Despite the coronavirus pandemic, work has progressed with strong backing from the UK Space Agency which, working with ESA, has extended exceptional support to small and medium-sized enterprises working in the space industry.

These nanosatellites are part of ESA’s Pioneer programme to support industry to deliver fast and affordable access to space in the field of telecommunications. The programme creates opportunities for both established and new players in the fast-changing and competitive satellite communications market.

ESA’s Pioneer programme is one of the partnership projects that is aimed at de-risking partners’ investments, answering market needs. It is part of ESA’s programme of Advanced Research in Telecommunication Systems (ARTES).

The programme creates new opportunities for both established and new players in the fast-changing and competitive satellite communications market.