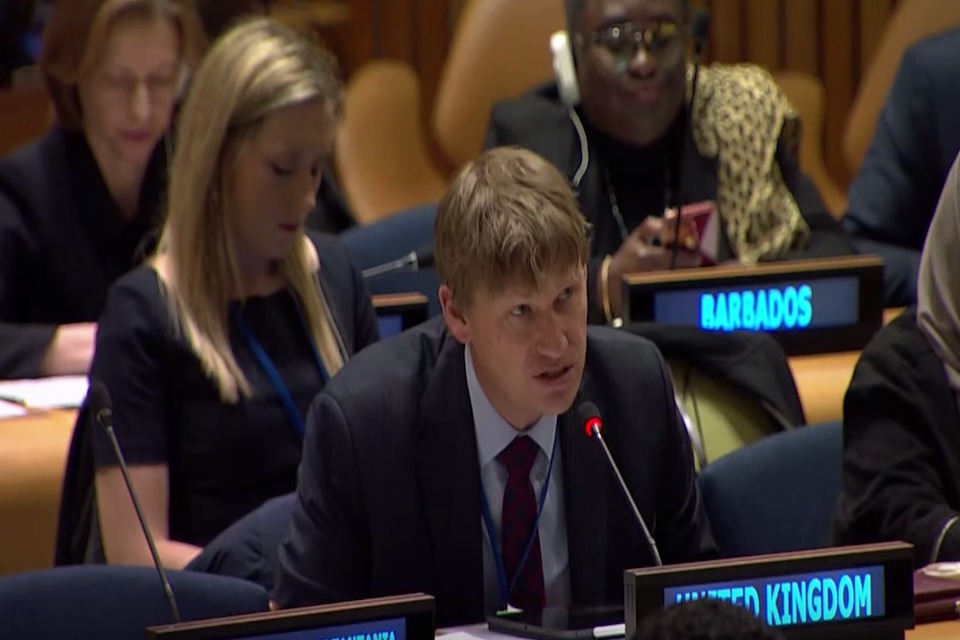 As the United Nations celebrates its 75th Anniversary our ambitions should be high, not least, of course, as this is the decade of action to achieve the SDGs. So we have an opportunity for us all here at the United Nations both to reflect on what 75 years of cooperation have achieved and how well we’ve got to today, but also how to renew this organization for a new generation.

Colleagues, our current way of working is unsustainable, and that threatens the success of the 2030 agenda and the longevity of the United Nations. We believe strongly in the revitalization of the organization. We believe that we must take further steps to streamline the agendas and working methods of this body and align its committees. We need to avoid duplications and overlaps between the General Assembly and ECOSOC. And we need to live up to the commitments made in previous revitalization negotiations, including on streamlining the number of resolutions, side events and reports.

Let me pick up, Madam President, on a couple of points we’ve covered today on Financing for Development. This is an issue of the highest importance for the United Kingdom. We all know there is a $2.5 trillion financing gap for the delivery of the SDGs. And this is the moment to redouble our efforts. Our goal should be to create self-sustaining economies, which can mobilize private sector investment and raise tax. And let me note that at the Africa Investment Summit in London on the 20th of January, attended by 21 African countries, £1.5 billion of British government investments were announced to create 100,000s of jobs and mobilise over £2.5 billion of additional private investment for Africa.

So private sector financing is socially, environmentally responsible, should play a central role in development. And in that context, I note the UK hosting of the COP 26 climate talks later this year where we believe it’s an opportunity to look at green finance and it greening the financial system as a whole. Thank you also for setting out plans to launch a panel on financial integrity. I want to reiterate in this regard the further development of this panel must be undertaken in an inclusive and transparent manner. There is already a significant amount of work going on with relevant UN bodies and other international organisations in this important area, and we would like to ensure a focus on the implementation of those efforts. In particular, the work of the UNODC, the UN Convention Against Corruption, the OECD and the Financial Action Task Force.

Finally, Madam President, let me just set out the continuing importance the United Kingdom gives to the Secretary-General’s reforms and the implentation of them here at the United Nations, in particular in development system reform will have opportunities to discuss those in the boards in the coming weeks. And we look forward to actively participating with our colleagues here in the HRPF, QCPR and of course, working with both you as Presidents of these important organizations.

Taking steps to ensure the UN remains sustainable and effective

International Affairs Release of US proposals for Middle East peace: For…

International Affairs Foreign Office advises against all but essential t…
0
✖