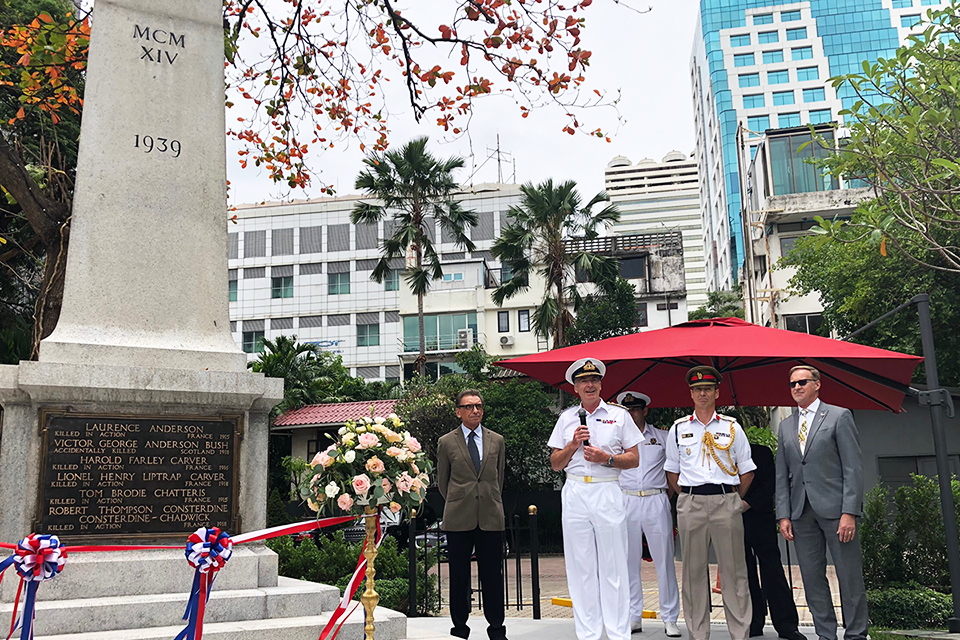 The War Memorial was erected at the beginning of 1923 to commemorate British servicemen in Thailand who gave their lives during the Great War. It was the first structure in the British Embassy Ploenchit Compound. The new location of the War Memorial reflects its historical significance to the British Community in Thailand.

There are many people I would like to thank today including the British Club, which has taken the time and effort to have the War Memorial installed here in such a perfect setting. It is very meaningful for all of us that continue to serve.

The War Memorial represents the enormous sacrifice made by many, many people over the last century, but it is particularly poignant that we continue to commemorate the sacrifice made by the 25 names inscribed on this Memorial and their connection to Bangkok. We will remember them.

The British Club Bangkok is honoured to be the new and final home of the British War Memorial. Many of those who gave their lives were British Club Members at the time, including The Hon. Robert Abercrombie Forbes-Sempill, who served as the Club’s Honorary Secretary from 1903-1905 but, as a Lieutenant in the 5th Gordon Highlanders, was killed in 1915. The first Remembrance Service at its new home is on Sunday 10th November.

The War Memorial will continue to be the focus for the Remembrance Day commemorations each year in its new location. This year, the Remembrance Service will be held at the British Club on Sunday 10th November.

The British War Memorial in Bangkok unveiled at a new location