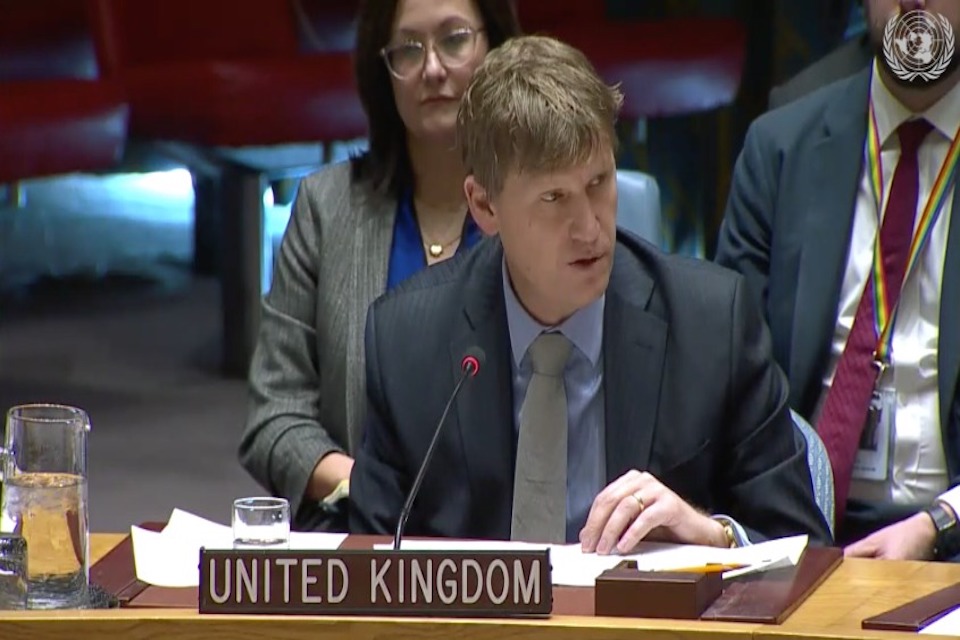 Mr President, we are appalled by the significant escalation in the Syrian regime and Russian violence in Idlib. We remain deeply disappointed that the ceasefire of 12 January barely lasted a couple of days.

The human cost of this military escalation is awful. Since 1 December, over 140 civilians have been killed by Russia and the regime. Since 29 April, over 1,500 civilians have been killed in northwest Syria, with roughly half of all casualties being women and children. Over 358,000 people have been displaced as a result of the escalation of violence. And the United Nations is now anticipating the possible further displacement of another 500,000 people in frontline areas.

Mr President, the population density within this ever-reducing pocket is already greater than in Gaza. The humanitarian system is overwhelmed. These innocent civilians are in urgent need of food, shelter, water, health and winterisation assistance. But we continue to see airstrikes and shelling on civilian infrastructure. I remind all parties, including those around this table, yet again of their obligation to comply with international humanitarian law.

On 11 January alone, 26 communities in Idlib were affected by airstrikes; targets included schools, hospitals and camps for internally displaced people. As recently as three days ago, an airstrike disabled al-Eman Hospital in Sarjah. Having repeatedly called for scrutiny of such attacks, we welcome again the Secretary-General’s Board of Inquiry, which is investigating some of the past attacks in Idlib. And we call on the Secretary-General to make the findings public. And let me restate our call for a full cessation of hostilities and a recommitment to the de-escalation agreement.

Now, Mr President, while all eyes are on the north-west, we must not neglect those in other parts of the country who are deliberately being denied humanitarian assistance. As we all know, because of the decision by China and Russia to veto a humanitarian resolution, the United Nations can no longer use the border crossings into the north-east and south of Syria.

The Russian ambassador argued, Mr President, that the crossing in north-east Syria was not needed because humanitarian assistance could be provided from Damascus. However, the truth is that the regime is not providing these people with the aid that they require or allowing the United Nations to do so.

And it’s not just the Northeast. Communities in former opposition-held territory, such as Eastern Ghouta and Eastern Aleppo, do not receive regular needs-based quality humanitarian assistance. The Syrian regime believes these communities are not aligned with its own politics, and so it punishes them for their perceived disloyalty by preventing them from receiving food and medicine. Russia and China, having acted to prevent life-saving aid reaching those in need, should now act to ensure aid can be delivered. And we look to the United Nations, including through the Secretary-General’s report coming in February, to highlight these gaps and challenges in the humanitarian response, and help us to find a solution so that aid can be delivered where it is needed.

I note, Mr President, that 60% of all contributions to the United Nations Humanitarian Response Plan in 2019 came from the United States, the United Kingdom and Germany. But it is incumbent upon us to ensure aid is provided on a principled basis and is getting to those who most need it wherever they may be.

Mr President, the United Kingdom is grateful for the United Nations’ continued work to find a solution for the people of Rukban in what remain extremely challenging conditions. More needs to be done in order to ensure the safety of the remaining residents in Rukban and those who have been leaving to seek shelter elsewhere. There has been no humanitarian assistance to Rukban since the end of September, and then we were only able to provide one month’s worth of supplies. We are also concerned about the fate of some who have left the camp voluntarily. The United Nations must have permanent and open-ended access to shelters in Homs and the final destination points of Rukban’s internally-displaced persons. This will ensure adequate monitoring and reporting on conditions, particularly on protection and human rights issues. And we would welcome the UN incorporating this into their regular reporting and keeping the council appraised.

Mr President, in conclusion, the humanitarian situation in Syria remains, as Mark Lowcock said, dire and deteriorating. The situation in Idlib is particularly worrying as Russia and the regime bombed civilians in the area. I hope Council colleagues will join me in calling for an immediate ceasefire there, that they will reiterate the importance of cross-border aid and that they will call on the regime and those allied to them to let the UN do its job: to save lives, Mr President.

The human cost of military escalation in Syria