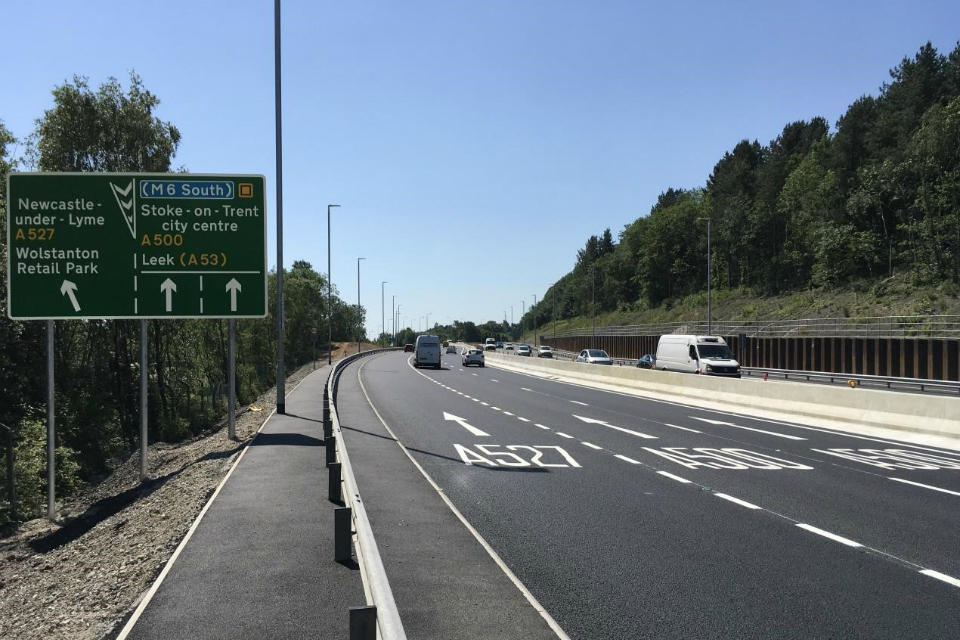 Journey times around North Staffordshire will be more reliable and shorter thanks to the £17.5 million Highways England project to tackle traffic jams on the road between Porthill (A5271) and Wolstanton (A527).

After 16 months work, the last line of cones were removed from the northbound carriageway last night (Thurs) meaning there will now be three lanes of traffic running in each direction and not two.

Since work began in February 2019 on the scheme, which was expected to finish this autumn, there has been:

With all lanes now open, the finishing touches will be added over the summer including the final landscaping works.

We are delighted to have now opened these much-needed extra lanes which will improve safety and reduce delays for anyone using this very busy road.

By improving journey times and easing congestion we will also support local businesses, attracting more investment and therefore creating more jobs. The benefits of this scheme will be enjoyed by people for generations to come.

Roadworks do cause some disruption and we are grateful to road users and the local community for their patience while we got this important work done and, happily, finished ahead of schedule.

I’m sure the vast majority of motorists in the city have been caught in tailbacks on this particular stretch of the A500 at some point, especially at peak times.

The widening of the road by Highways England is a big step in the right direction and is great news for residents, commuters and businesses. It will cut queues, reduce pollution and speed up journey times, which will increase economic activity.

Stoke-on-Trent is a fast growing and developing city and it’s vital we have a transport network that matches our aspirations, which is why it’s so encouraging this scheme has been recognised and supported at a national level.

Haulage firm boss Barry Proctor, whose business is based just off the A500 at Talke Pits, said:

Highways England have done an excellent job on the A500, the work has progressed quickly with very little disruption to traffic. These extra lanes will reduce the amount of time our vehicles sit in traffic which will be a boost to mine and many other businesses.

For the majority of the works two narrow lanes of traffic have been kept open on the road – which carries around 85,000 vehicles a day.

Significantly reduced traffic numbers on the A500 during the coronavirus lockdown has enabled work to be carried out on the central reservation during the daytime rather than overnight. This has meant a longer working window to get the scheme completed more quickly and it has reduced the noise to local residents.

To ensure the safety of workers and road users the road was reduced to one lane in both directions but traffic numbers were monitored and the arrangement reviewed on a daily basis.

Other benefits of the widening scheme include:

To safely carry out the finishing touches and final landscaping to the scheme, a small number of overnight closures will be required over the next few weeks and a full weekend closure of the southbound carriageway along this stretch from 9pm on 10 July until 5am on 13 July.

The long and widened road: A500 work finishes ahead of schedule