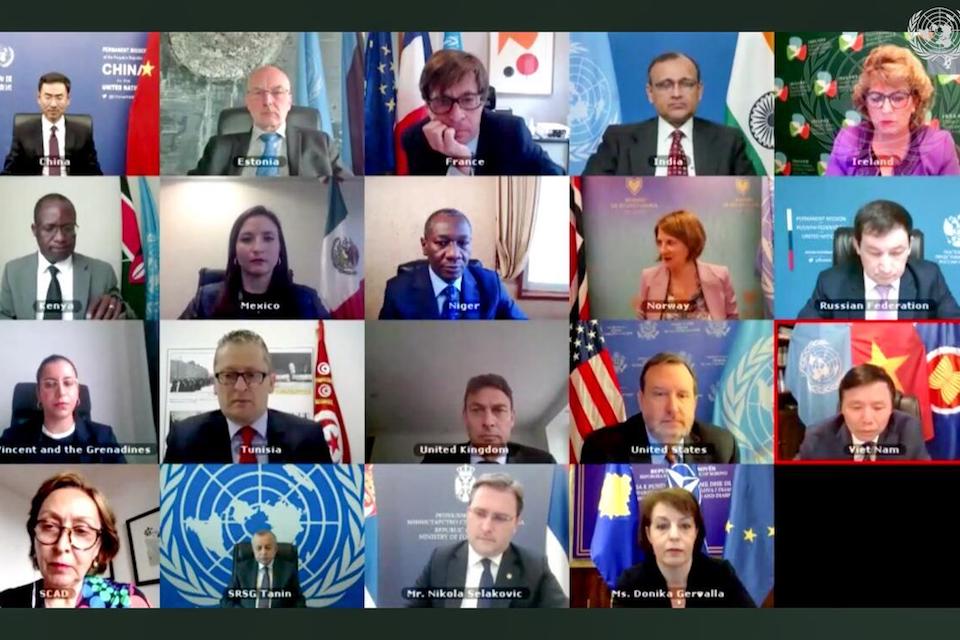 Thank you, Mr President. And thank you to Special Representative Tanin for his briefing. Welcome to Minister for Foreign Affairs Selakovic and Foreign Minister Gervalla and thank you for your statements.

Firstly, we want to applaud Kosovo’s authorities and the people of Kosovo on the handling of the recent Parliamentary elections, and congratulate them on the appointment of a new President, both reflecting the strong will of the people. The smooth conduct of the elections, the certification of the final results, and the successful formation of a new government shows just how far Kosovo has come and the strength of its democratic institutions. We note in particular that Kosovo has elected its second female President and that women now represent 6 out of 15 Cabinet Ministers, and 43 out of 120 members of the Assembly – real progress in gender representation that we hope will set an example to others in the region.

We note the concerns raised in the report about the difficulties experienced by candidates running in opposition to Serbian List candidates in some areas. These concerns were also reflected in the conclusions of the UK’s own election monitoring mission. It is imperative that Kosovo Serbs have the opportunity to vote for a variety of candidates and to participate in credible elections.

On behalf of the United Kingdom, I welcome the formation of the new government in Kosovo and we look forward to a period of much-needed stability at a challenging time when Kosovo, alongside other nations, battles the health and economic threat of the Covid-19 pandemic. In this regard, we are very pleased to note the commencement of vaccination programmes in Kosovo following the arrival of the first vaccine doses through the COVAX facility. We praise the work of UNMIK in assisting with the fight against Covid-19, particularly addressing the needs of minority communities through language resources. UK-funded work with UN agencies in Kosovo is further supporting the pandemic response.

We also welcome PM Kurti’s commitment to addressing rule of law challenges in Kosovo and, as ever, stand ready to support Kosovo in this important work.

The new government’s popular mandate brings further opportunities for Kosovo to make progress. This includes commitment to the EU-facilitated Dialogue with Serbia under EU Special Representative Miroslav Lajcak. We encourage Kosovo and Serbia to continue working constructively towards a comprehensive and sustainable normalisation agreement that will benefit the people of both countries.

As part of this process, it is essential that all parties work hard to address legacies of the conflict. The work of the KSC is a significant part of this, but it is also important that both parties ensure justice for victims of all crimes committed during the 1998/1999 conflict. This includes continued efforts to prosecute the perpetrators; support victims, including those of conflict related sexual violence; and work together on resolving issues such as missing persons that continue to impact the daily life of families in Kosovo and Serbia.

Once again we call upon all those in positions of authority to refrain from inflammatory and derogatory language. Such rhetoric is disrespectful to the memories of the victims of conflict and their families and does not contribute to the reconciliation that is strongly in the interests of all people of the region.

Kosovo has made huge progress since 1999 when UNSCR 1244 was passed. UNMIK has played an important role in helping Kosovo to develop into a stable and inclusive democracy. But the conditions on the ground almost 22 years since UNMIK was founded are completely different. It is therefore time for a review of UNMIK’s role and responsibilities to ensure that its mandate remains relevant and the Mission operates efficiently.

Finally, we welcome the appointment of Michael Davenport as the new head of the OSCE Mission in Kosovo and wish him luck. We welcome continued close coordination of efforts between UNMIK and OMIK, notably on human and minority community rights.

Coronavirus Treasury Direction made under Sections 71 and 76 o…

Coronavirus Surge testing to be deployed in Finchley, Barnet
0
✖