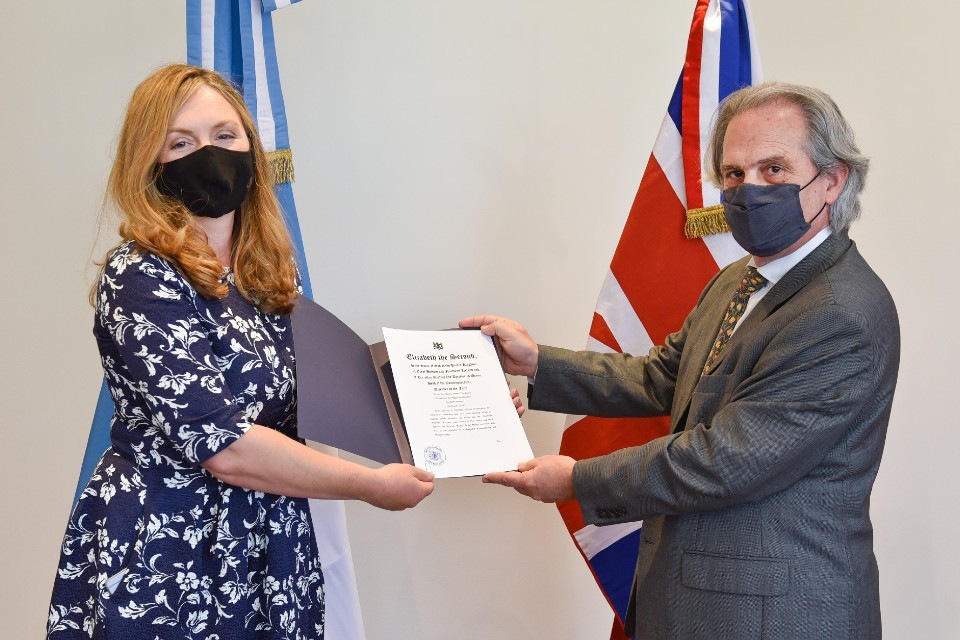 The new British Ambassador to Argentina, Kirsty Hayes, presented the copies of her credentials to Secretary of Foreign Affairs Pablo Tettamanti, during a meeting held today (23 September) at the Palacio San Martín.

During the meeting, they discussed the status of the bilateral relationship and opportunities for bilateral cooperation in different areas. Ambassador Hayes thanked the commitment expressed by the President of Argentina, Alberto Fernández, to participate in the world leaders summit to be held in November in the city of Glasgow, within the framework of the conference on climate change (COP26) that the UK is hosting.

I feel very honored to be able to represent my country before Argentina, a country with which we have many historical ties and also great opportunities for cooperation in a significant number of areas, ranging from the fight against climate change, the promotion of human rights, respect for diversity and gender equality, and scientific exchanges, as we have seen recently in the development, production and distribution stages of COVID-19 vaccines.

I presented copies of my credentials to the Secretary of Foreign Affairs Tettamanti, and took the opportunity to thank him for the gesture of President Fernández in attending the COP26 Leaders’ Summit. We are convinced that Glasgow will be a unique opportunity to take actions that limit global warming, and for this the coordinated action of all countries is essential.

Ambassador Hayes arrived in the country on 11 September along with her husband, Peter Hayes, after which she maintained the corresponding period of isolation in accordance with current sanitary measures.

Before being appointed head of the UK’s diplomatic delegation in Argentina, she acted as Ambassador to Portugal and held various positions in the Foreign, Commonwealth & Development Office (FCDO) and the Home Office, both in London and in other cities such as Washington and Hong Kong.