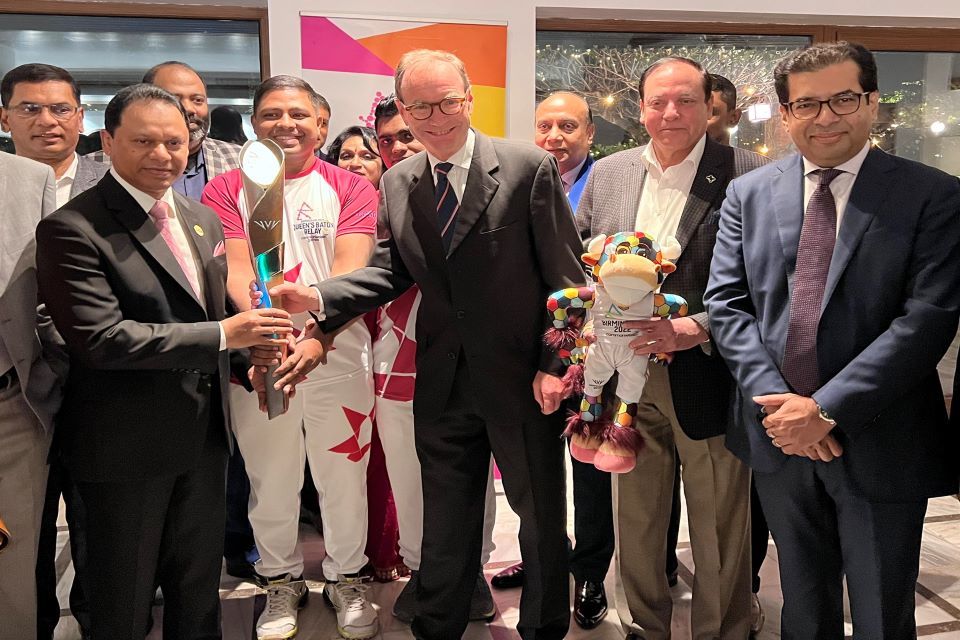 The 16th official Queen’s Baton Relay arrived in Dhaka on Thursday 6 January as it continues its global journey around the 72 Commonwealth nations and territories before concluding at the opening ceremony of the Birmingham 2022 Commonwealth Games on 28 July.

The Baton was carried to the High Commission by celebrated Bangladeshi sport shooters Abdullah Hel Baki and Shakil Ahmed, where they were welcomed by the British High Commissioner Robert Chatterton Dickson, alongside the President of the Bangladesh Olympic Association General S M Shafiuddin Ahmed, SBP, OSP, ndu, psc, PhD. The reception was attended by several renowned sports persons in Bangladesh, representatives of Bangladesh government, different civil society organisations, youth groups, British businesses, and heads of missions of the Commonwealth countries in Bangladesh.

“With the 50th anniversary of UK-Bangladesh relations and our ties through the Commonwealth, the arrival of the Queen’s Baton Relay in Bangladesh is another important milestone of Brit Bangla Bondhon.

“The Baton Relay has been an essential part of the Commonwealth Games for over 60 years and celebrates communities from across the Commonwealth during the run up to the Games. It ignites hope, solidarity, and collaboration as it connects communities embracing unique cultures and inspires the next generation of sporting heroes.”

The arrival of the Queen’s Baton Relay will amplify moments of celebration in Bangladesh with its golden jubilee of independence, and offer opportunities for reflection and connection, galvanizing the future potential of the Commonwealth.

The Baton will visit the National Martyrs’ Monument, the Bangladesh Army Stadium and Bangladesh Krira Shikkha Protishtan (BKSP), the national sports institute of the country. The Baton will also visit the Bangladesh Olympic Association and Shaheed Bir Uttam Lt. Anwar Girls’ School and College. Throughout, Baton bearers, athletes and others will share stories of striving for change in their communities.

After Bangladesh, the Baton Relay will travel to India on 10 January.