The Silent Pandemic: No Time To Wait 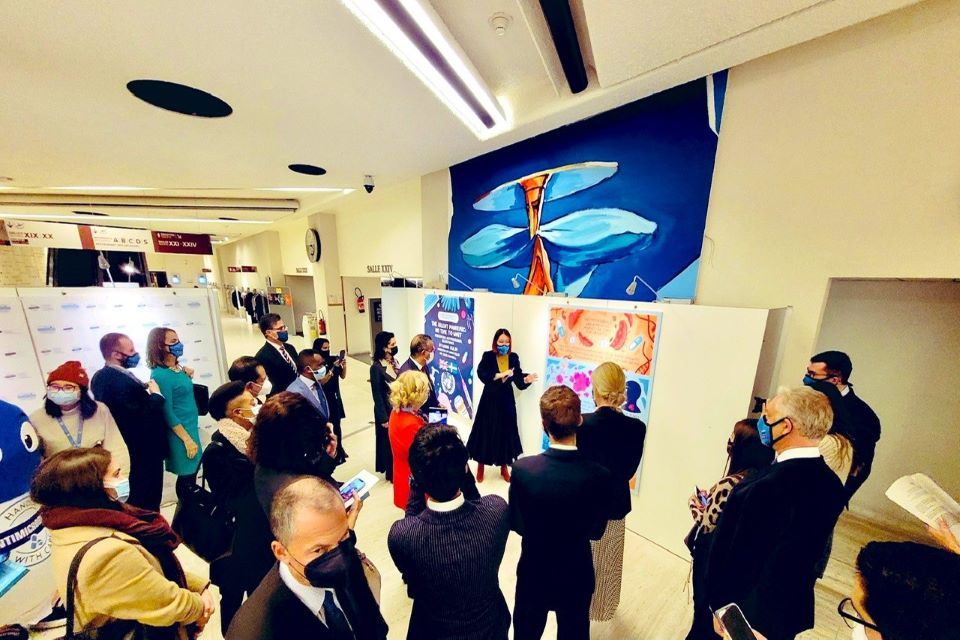 The UK Mission partnered with the Swedish Mission in Geneva to unveil a new art exhibition entitled ‘The Silent Pandemic: No Time To Wait’ to mark the start of World Antimicrobial Awareness Week today. Antimicrobial resistance (AMR) is one of the greatest public health threats facing the world. The emergence of drug resistance means that antimicrobials (antibiotics, antivirals, antifungals, antimalarials, antiparasitics) are becoming ineffective against the infections and illnesses they aim to treat, including for diseases such as malaria, tuberculosis (TB), HIV and maternal and newborn infections.

The exhibition features a graphic cartoon series raising awareness of AMR by Wang Xulin, an award-winning illustrator from Toronto and a three-part display “Save Modern Medicine” by Josh Campbell, Claire Oxlade and Pim Pearce.

During his keynote address, Dr Tedros said, “Art has the power to reach audiences in a way that technical documents cannot. I am particularly grateful to Wang Xulin, the talented artist behind the canvasses, for their role as an awareness champion for antimicrobial resistance.”

The UK’s Permanent Representative to the UN in Geneva, Simon Manley said, “AMR is a top priority for the UK and COVID-19 has clearly demonstrated that infectious diseases, including resistant infections, do not respect borders. The rising threat of AMR – often called the ‘silent pandemic’ – demonstrates the continuing need for international cooperation”.

Sweden’s Permanent Representative to the UN, Anna Jardfelt in her remarks said, “The pandemic has taught us that by making the necessary political decisions, it is possible to take great strides in a short period of time. We hope that this excellent piece of work by the artist Wang Xulin, can contribute to such political commitment also on AMR, by illustrating the consequences of inaction.”

On bringing the topic of AMR to life through their drawings, the artist Wang Xulin said, “My goal for this exhibit was to create something visually distinct, colourful, and emotionally resonant. I chose to show moments that most people can relate to, connecting the issue of AMR to their own families and their experiences. I wanted to be involved because fighting AMR is such an important cause, and will impact the lives of every human being. As an artist I have always been interested in science and social justice, and I find meaning in educating and helping people the best way I can.”

The UK Mission also partnered with the Cambridge Mask Company who provided custom made masks for the launch of the exhibition. The partnership illustrates the importance in educating everyone, not just thought leaders, into choosing the right mask in order to protect long term respiratory health from a variety of external threats including viruses and air pollution. The company which was founded by Christopher Dobbing in 2015 was keen to highlight that this partnership is the first step to ensuring we steer away from single use disposable masks which are becoming an ever increasing threat to both our planet and the oceans.

The exhibit will be displayed at the UN in Geneva until Wednesday 24 November.

The Silent Pandemic: No Time To Wait