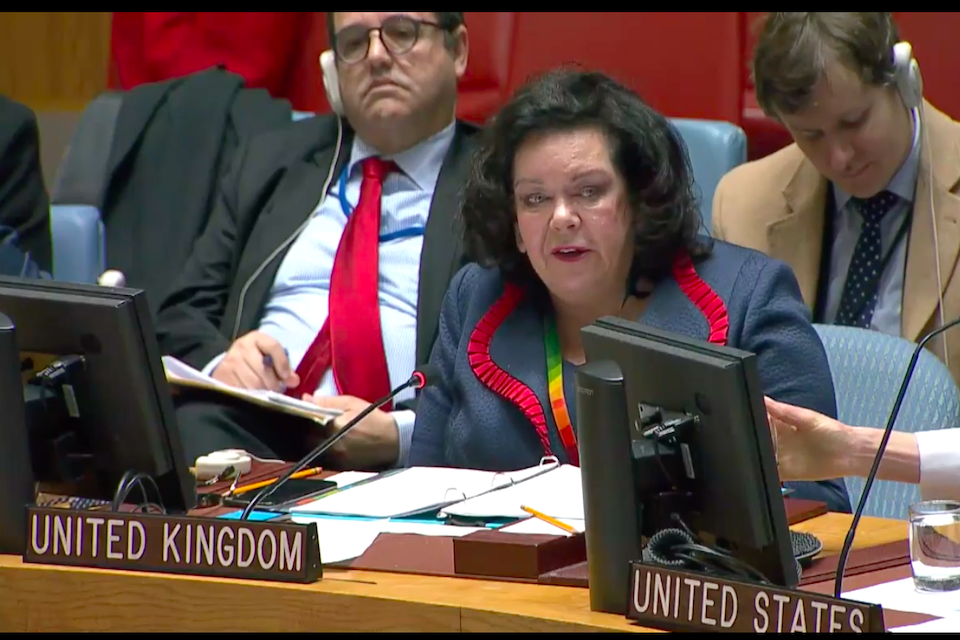 We come here every month and we hear these briefings and they normally swing between optimism and pessimism. But we all know the underlying realities of Yemen and we all know the risks that face the Yemeni people. And in that connection, I have to say, I find it astonishing that there can still be the sort of fighting that both Martin and Ramesh have described today.

I want to begin by echoing both your pleas to all parties for the fighting to stop and for de-escalation to begin. And as Martin said, this has to be public, it has to be accountable, it has to be nationwide, and we have to get into more negotiations, wider negotiations that actually make tangible progress. So the United Kingdom says today to all the parties, please act in good faith. Please engage in the process. Please seize the opportunity and ensure that 2020 is the year when we bring this dreadful conflict to a close. Martin has laid out what the roadmap to that closes and we urge the parties to cease it without delay.

I want to also echo what Martin said when he was in Marib. The conflict cannot be solved on the battlefield and I want to talk about the continuing obstructions put on the Redeployment Coordination Committee by the Houthis. I note the announcement today that the Government of Yemen has suspended its participation in the Committee. Less engagement is not the route to bringing peace to Hodeidah or to Yemen as a whole. Again, the United Kingdom urges and implores all the parties to constructively cooperate with General Guha and UNMHA. There is one positive development in the increased engagement between Saudi Arabia and Oman at least that’s how it seems. Increased dialogue between regional actors is key for stability, not just in Yemen, but in the region as a whole.

On humanitarian access, Mr. President, I think Ramesh is absolutely right to say this in the context of international humanitarian law and the figure about casualties of children going up from 1 in 5 to 1 in 4 is shameful and it should horrify us all and urged us to redouble our efforts. On the difficult issue of the operating environment for humanitarian actors. I know there have been some small signs of improvement in North Yemen, but of course there’s much more to do. We call on the Houthis to now deliver on the minimum operating requirements that the international community has clearly set out. The world’s worst humanitarian crisis can’t afford to deteriorate any longer. We look to the UN and the international community to remain united in response to access constraints and this was possible at the Brussels donor meeting on 13 February, which was helpful. Any plans to scale back assistance should be fully coordinated in order to limit the impact on Yemenis in need.

I wanted to echo what Ramesh said about the SAFER oil tanker. Again, it is incredible that every month we come here and every month we hear how precarious the situation is with this tanker and nothing gets done. So while I know negotiations are underway to find a diplomatic way forward again, I call on the Houthis to allow either the removal of the oil or repair mission to precede. Continued Houthi inaction on this issue is nothing short of reckless. They are playing dice with people’s lives and with the environment in a very important part of the world. The huge environmental and humanitarian damage must be avoided and all steps must be taken to that end.

I have followed with interest what was said about the economy. We’re very concerned that the Central Bank of Yemen may run out of foreign currency reserves in the next few weeks, which of course will exacerbate the humanitarian and political consequences. Significant external financial assistance to the Central Bank at the scale of $1-$22 billion dollars we believe is urgently needed so that imports can come in. And I hear what Ramesh described about the bank notes and obviously, that needs resolving quickly and the currency needs to stabilize so ordinary Yemenis can afford the food and medical supplies they need. So we look to the Government of Yemen to come up urgently with a credible and transparent plan that reassures potential donors of their investment to the Yemeni people. And again, I think this is one of those issues which is getting closer and closer to the precipice so we really do need to take action.

Lastly, Mr. President, if I may, I’d like to say something about Covid-19. The last thing Yemen needs will be an outbreak of this, I notice the increasing restrictions that many states are implementing in the region. It is good to know that UN agencies are taking steps to ensure the effect on their work is as limited as possible.