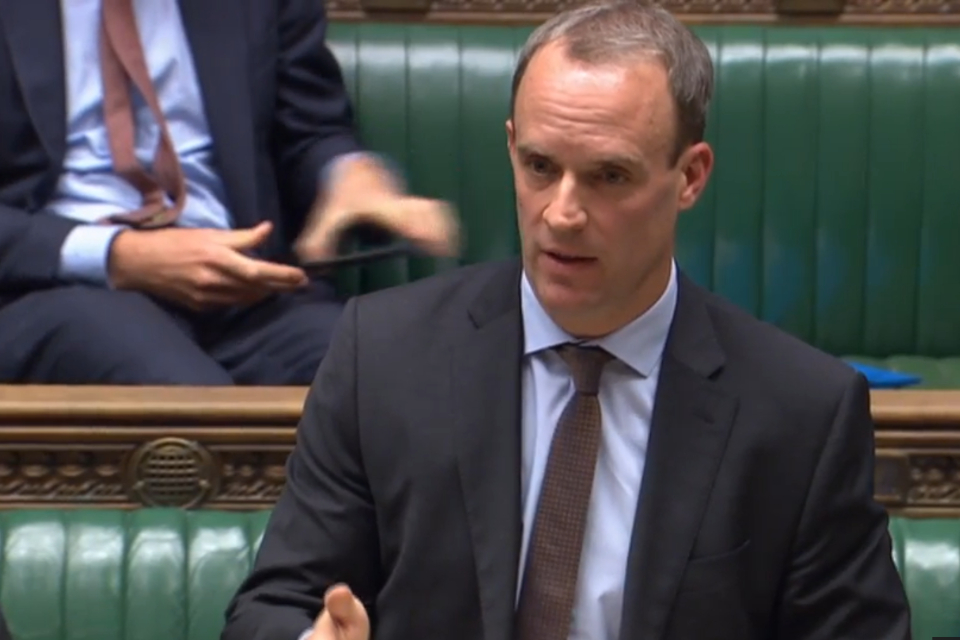 On 9 October, following the US announcement that it would withdraw its troops from the region, Turkey launched a military operation in north east Syria. Turkish troops have pushed into northern Syrian towns and villages, clashing with the Kurdish fighters over a stretch of now 125 miles. The UN estimates that at least 160,000 people have been displaced in less than a week.

From the outset, the UK government has warned Turkey against taking this military action. And as we feared it has seriously undermined the stability and the security of the region. It risks worsening the humanitarian crisis and increasing the suffering of millions of refugees. And it also undermines the international effort that should be focused on defeating Daesh.

I can tell the house, Mr Speaker, on Thursday, 10 October, I spoke to Turkish Foreign Minister, Mevlut Cavusoglu and expressed the UK’s grave concerns. On Saturday, 12 October, the Prime Minister spoke to President Erdogan to reinforce those concerns and urge restraint. I also addressed the issue at the NATO Parliamentary Assembly on Saturday. And yesterday, the EU released a statement which we joined, condemning Turkey’s unilateral military action, and calling on it to withdraw its forces.

The UK government takes its arms export control responsibilities very seriously and in this case of course we will keep our defence exports to Turkey under very careful and continual review. And I can tell the house that no further export licences to Turkey for items which might be used in military operations in Syria will be granted while we conduct that review.

And yesterday, the honourable members will know the US signed an executive order to impose limited sanctions on Turkey, including against senior members of Turkey’s government. The EU considered this, and on balance, decided against sanctions at this stage. However, we will keep the position under careful review.

It is only right, Mr Speaker, as we condemn this military intervention, that we also recognise some of the legitimate concerns that Turkey has – in relation to the 3.6 million refugees that it has taken from Syria. And its concerns around the threat to its security from the PKK at its southern border with Syria.

For decades, Turkey has been a staunch ally in NATO – one of the largest contributors of military personnel. But with close partners, Mr Speaker, we must at times be candid and clear. This is not the action we expected from an ally. It is reckless, it is counterproductive, and it plays straight into the hands of Russia and indeed the Assad regime.

So the UK government calls on Turkey to exercise maximum restraint and to bring an end to the unilateral military action. I commend this statement to the House.