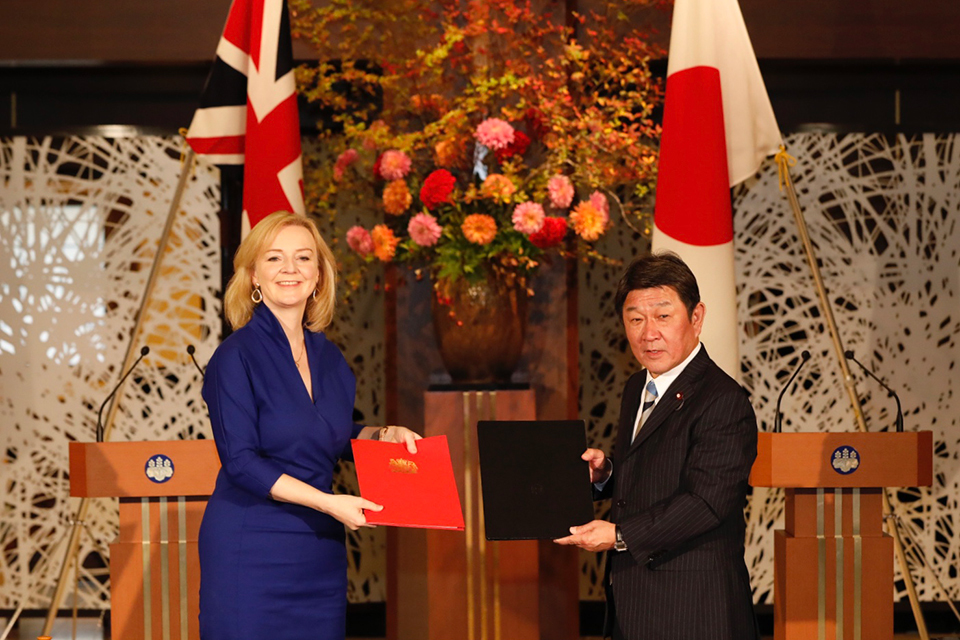 The UK has officially signed an economic partnership agreement with Japan, marking an historic moment, as the UK’s first major trade deal as an independent trading nation and offering a glimpse of Global Britain’s potential.     The UK-Japan Comprehensive Economic Partnership Agreement was signed by International Trade Secretary Liz Truss and Japan’s Foreign Minister Motegi Toshimitsu in Tokyo this morning (Friday 23 October).     The deal is tailored to both economies and has secured that goes beyond existing EU deals, with big benefits for digital and data, financial services, food and drink, and creative industries.

The deal brings together two of the world’s most technologically advanced nations, placing the UK at the forefront of shaping new global standards on digital trade.    The estimated boost to trade between the UK and Japan is over £15 billion, with long term economic benefits that are crucial to ‘build back better’ from Covid-19, reshaping the UK economy so it is fit for the future.

The agreement also includes a strong commitment from Japan to support UK joining the Trans-Pacific Partnership (TPP), one of the world’s biggest free trade areas, covering 13% of the global economy and more than £110bn of trade in 2019.    This will help strengthen trade ties between the UK and eleven Pacific countries and set new standards for global trade.     This signing marks a new closer alliance between the UK and Japan, which will see our two like-minded democracies work together as the UK takes up the G7 presidency, where we will champion free trade.

Today is a landmark moment for Britain. It shows what we can do as an independent trading nation, as we secure modern and bespoke provisions in areas like tech and services that are critical to the future of our country and the reshaping of our economy.

Trade is a powerful way to deliver the things people really care about. At its heart, this deal is about creating opportunity and prosperity for all parts of our United Kingdom and driving the economic growth we need to overcome the challenges of coronavirus.

The agreement also has a much wider strategic significance. It opens a clear pathway to membership of the Comprehensive Trans-Pacific Partnership – which will open new opportunities for British business and boost our economic security – and strengthens ties with a like-minded democracy, key ally and major investor in Britain.