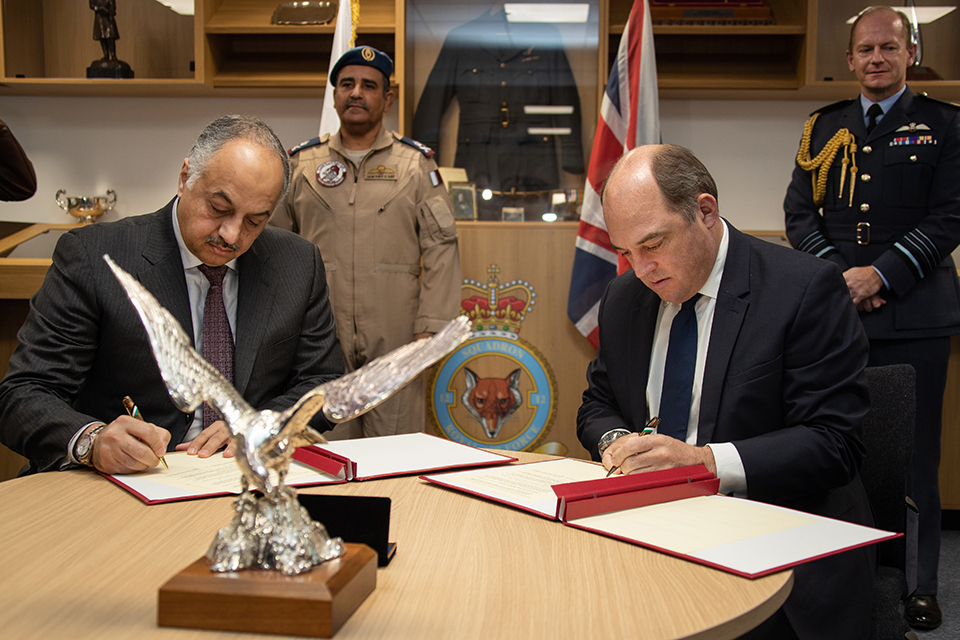 During a tour of the base, which is already home to the UK-Qatari joint Typhoon squadron, the two Defence Ministers signed a Statement of Intent setting out how the UK will offer a British base for the Qatari Emiri Air Force’s (QEAF) recently acquired nine Hawk aircraft.

The QEAF’s latest acquisition opens doors for a potential new UK-Qatari Hawk squadron, which would further deepen the UK’s defence relationship with Qatar and contribute to the security and stability of the Middle East.

Qatar and the UK work closely together to protect that stability. The details of the latest strike by RAF Reaper unmanned aircraft against Daesh have also been released today by the Ministry of Defence that were co-ordinated by the RAF’s No.83 Expeditionary Air Group in Al Udeid, Qatar.

Today we mark the start of an exciting new chapter in the longstanding defence relationship between the UK and Qatar, reinforcing and strengthening the bonds our Armed Forces already share.

Building upon the success of our joint Typhoon squadron, this new era of collaboration will deliver prosperity and security benefits for both our nations.

12 Squadron is the UK’s first joint squadron since World War Two, and its new headquarters will allow pilots and air crews from both air forces to train together in state-of-the-art facilities.

Built in under 60 weeks by a team of over 30 sub-contractors from both national and local supply chains, it is expected that the basing of a new Hawk squadron will bring similar benefits to the UK.

Since commencing flying as a joint squadron in June 2020, 12 Squadron have achieved several milestones including training with heavy weapons and taking part in an exercise at sea alongside the Royal Navy.

The Statement of Intent will build on this work by providing the RAF with access to increased flying hours, giving the QEAF access to world-class RAF accredited training, and delivering long-term investment in infrastructure and training facilities to the RAF.

This partnership will also enable the two nations to continue discussions to establish a suitable air-to-air refuelling support solution for Qatar, which would see the RAF and QEAF further aligned on Multi Role Tanker Transport capability.

Today’s event builds upon the Defence Secretary’s talks with HE Dr Khalid during his visit to Qatar in September, where he also toured the Combined Air Operations Centre in Al Udeid, where strikes are coordinated from as part of Operation Shader.

UK and Qatar commit to a stronger defence relationship