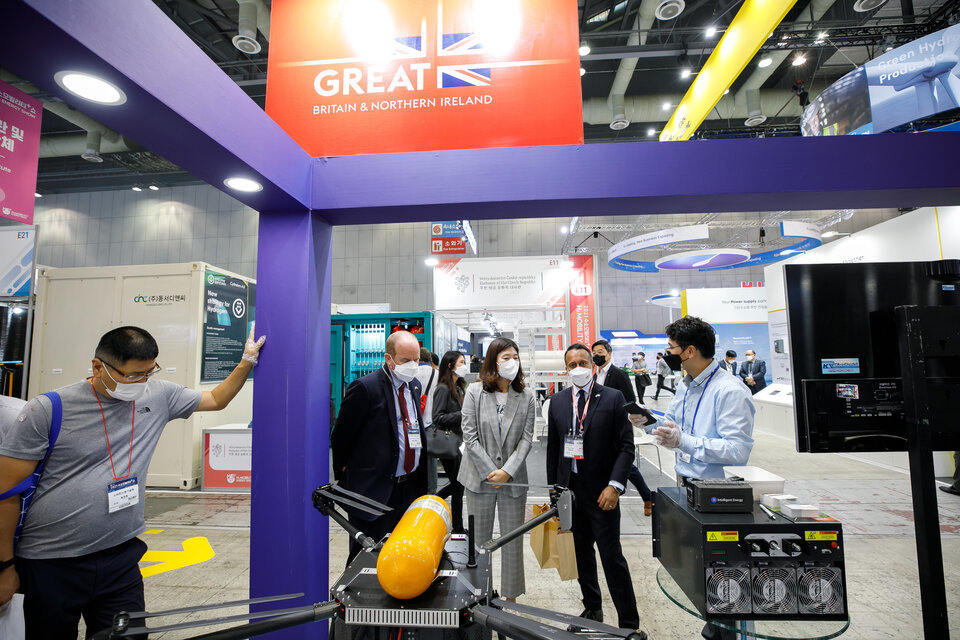 UK exporters to South Korea have landed deals they estimate to be worth over £70 million following support from the Department for International Trade (DIT).

UK-made products ranging from hydrogen fuel cells and offshore wind technology to lifejackets will be supplied to the South Korean market through deals made at DIT-supported trade shows in South Korea.

In fact, UK exports to this fast-growing nation increased by 9% (or £620 million) in the year to June 2021 compared to the same period the previous year.

South Korea is the tenth largest economy in the world and a growing market for exports of top-quality British products. The country forms a key part of UK’s strategic tilt to the Indo-Pacific region as we look for new opportunities to trade.

Trade between our two nations increased by 6% to total £13 billion in the year to June 2021, and the UK exported £2 billion more to South Korea than it imported.

As part of our Global Britain agenda we are helping businesses capitalise on the huge demand for British goods and services in South Korea. As the UK eyes future growth opportunities in the Indo-Pacific, we plan to strengthen trade ties with the region’s biggest economies.

We recently negotiated the world’s most ambitious digital trade deal with Singapore, and we’re on track to join the CPTPP this year, a huge free trade area with a combined GDP of £8.4 trillion.

The government also provided tailored export advice to improve firms’ understanding of the South Korean market and grow their network.

Some of the UK businesses that credit DIT’s support in contributing to deals brokered this year include:

This year the government plans to review the Continuity Free Trade Agreement with South Korea which came into force on 1st January 2021.

The deal has already helped businesses across a wide range of sectors – including tech and clean growth – enter the South Korean market and with the growth in demand for British goods and services, there is scope to expand trade even further.

UK exports to South Korea boomed last year, with British businesses wrapping up deals worth tens of millions. We expect this trend to continue as we implement our new 12-point export strategy and build out our ambitious UK Tradeshow Programme.

Not only will this plan give businesses the tools needed to take their top quality products worldwide, but it also focuses support on SMEs and businesses outside London to help level up opportunities throughout the UK.

Thank you always for the support from DIT and the Embassy in Seoul. We appreciate all of the effort that has gone into helping Ceres in Korea along the way and I look forward to continuing to stay close as progress our continued expansion.

DIT has done a great job facilitating our introduction to the South Korean wind industry. Thanks to them we have built excellent relationships with a variety of R&D partners including Kunsan University, XFINASIT and BlueWind. We look forward to working again with the DIT team in Seoul on future projects.

As part of the government’s recently announced Export Strategy to help boost exports per year to £1 trillion, DIT has launched a new UK Tradeshow Programme. Aimed at businesses outside London and the Southeast, the programme will enable companies to promote their products around the world, boosting trade and growth whilst supporting the government’s levelling up agenda.

Business Have your say on designs

Business CMA Chief Executive confirms plan to step down in …
0
✖