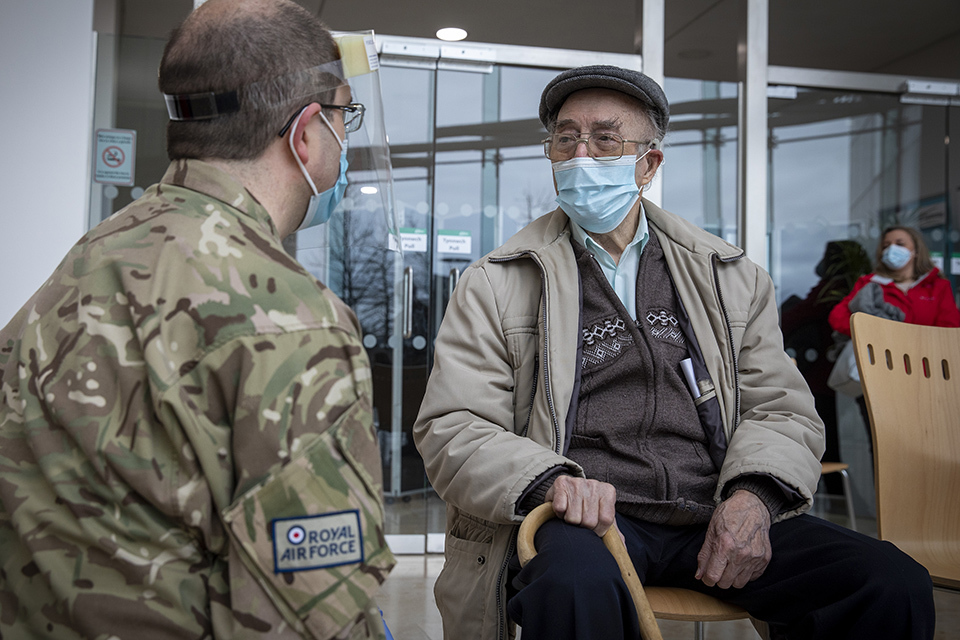 Secretary of State for Wales Simon Hart and the Defence Minister for the Armed Forces James Heappey have approved a Military Aid to the Civilian Authorities (MACA) request from the Welsh Government. The MACA will provide 96 service personnel to carry out a range of tasks including up to 20 defence medics who will boost capacity by leading teams of local vaccinators.

It follows a similar request from the Welsh Government in December which saw UK Government provide 92 service personnel to support Wales’ Health Boards in rapidly establishing and operating vaccination centres. As part of this task trained defence personnel administered the vaccine for the first time since the rollout began.

As part of the latest request, the 96 additional service personnel will deploy from 6 February and are expected to be on task until the end of April 2021. Their progress will be reviewed after 15 February, which is the target for offering a first dose of the vaccine to the top four priority cohorts. The review will help UK Government understand the level of demand for the 92 service personnel who have been supporting Welsh Government since early January, and who are expected to complete their duties on 28 February.

Separately, the UK Government has also provided two military planners to Betsi Cadwaladr University Health Board in North Wales until mid-March to assist with the planning of the vaccination programme in the area.

Our military personnel are playing a crucial role in making sure that those who are eligible for the vaccine in every part of the United Kingdom get their jabs as quickly as possible.

Working alongside local partners and healthcare heroes, I’m grateful for their efforts which are testament to the strength of our Union and will help us maintain the rapid pace of the roll out in all four corners of the UK.

I’m proud that the UK Armed Forces and NHS are working so closely together to roll-out the vaccine across the UK. With this deployment we are stepping up our support in Wales, bringing specialist skills to accelerate vaccinations and save lives.

The vaccines represent the light at the end of the tunnel and their rapid roll-out across the UK will help us regain normality as soon as possible.

The British Armed Forces are vital in this effort and I’m incredibly thankful for the work they have been carrying out in Wales throughout the pandemic.

After becoming the first country to approve a vaccine for use, the UK Government has procured and purchased vaccines on behalf of all parts of the UK. Approved vaccines are available across the UK, free at the point of delivery and are being rolled out to those most at risk in line with the independent advice of the Joint Committee on Vaccination and Immunisation (JCVI).

Vaccination is managed by the health services in each nation: NHS England and NHS Improvement, NHS Wales, NHS Scotland, and Health and Social Care Northern Ireland. Armed Forces personnel have deployed to assist health services with planning and logistic support for the delivery of a vaccine.

The UK Government has also invested over £230 million into vaccine manufacture and will meet the cost of vaccines, which will be distributed to all nations of the UK, Crown Dependencies and Overseas Territories.

There are over 5,000 Armed Forces personnel supporting 74 Covid-19 tasks in the UK and abroad, including the vaccine rollout, NHS support and community testing across the UK.

The Armed Forces have provided significant support in Wales throughout the pandemic. As well as assisting the vaccine roll-out, they have supported the Welsh Ambulance Services NHS Trust (WAST) with over 90 ambulance drivers and defence medics.

Defence has also deployed military planners across Wales, including at the Welsh Government’s Emergency Coordination Centre Wales in Cardiff and the seven Local Health Boards. This support is in addition to the development of field hospitals, including at the Principality Stadium in Cardiff, the delivery of PPE and support for the community testing programme in Merthyr Tydfil.