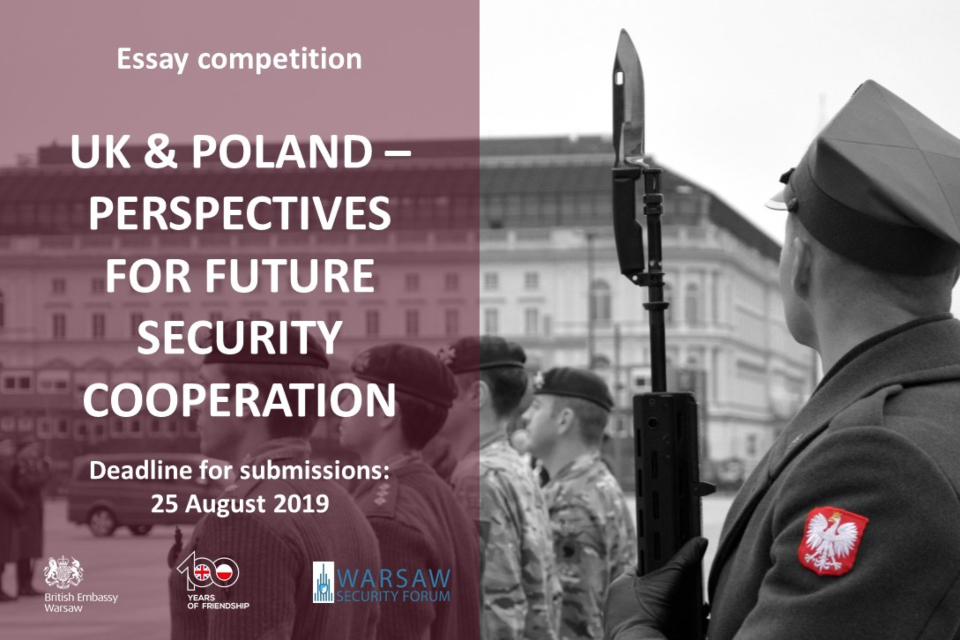 The close collaboration between the UK and Poland as strong contributors to European, transatlantic and global security has been an important factor in NATO’s success. Both countries meet the NATO spending defence pledge, support regional deterrence as part of Enhanced Forward Presence and join forces in NATO missions around the world.

In a year where we look back to commemorate 100 years of renewed diplomatic relations between the UK and Poland, 70 years of NATO and 20 years of Poland and the UK as partners in the Alliance, the British Embassy Warsaw and the Kazimierz Pułaski Foundation launch “UK & Poland – Perspectives for Future Security Cooperation” – an essay competition.

How can you take part in the competition?

We would like you to look forward and write an essay on how NATO – and the UK and Poland as key allies – can drive forward European and transatlantic security cooperation and our response to modern threats.

Write an essay on one of the following topics:

What do you get if you win?

The winning essay will be published on the British Embassy Warsaw’s website and social media channels.

The winner and runner up in each category will receive a pass for the Warsaw Security Forum and meet with UK officials joining the workshop.

Rules of the contest

Participation in the contest is open to BA and MA students of any institution of higher education in Poland residing in Poland during the duration of the contest, excluding British Embassy Warsaw or Kazimierz Pulaski Foundation staff and members of their families.

The essay should be written in English. The maximum word count is 1400.

Only one entry per participant is allowed.

The essay should be all the own work of the participant. Plagiarism is not accepted.

Entries should be submitted as a link (eg. via WeTransfer or Google Drive) to the British Embassy Warsaw (hereby: organisers) at info@britishembassy.pl by Sunday, 25 August 2019, 23:59 CET. The email should be titled “UK & Poland security cooperation – essay competition”.

Entries should include the participant’s name, surname, academic affiliation, and place of residence.

They should also include a scanned version of the image consent (ODT, 11.6KB) , signed by the participant.

Personal data will be protected in line with GDPR requirements. More information is available in the privacy notice (ODT, 12.8KB) .

The work of the contest panel is confidential – there will be no possibility to appeal on the panel’s decision and the panel is not obliged to disclose the arguments behind its choice.

Should any of the category winners or runner-ups require travelling from outside of Warsaw in order to participate in the Warsaw Security Forum, travel expenses will be covered by the organisers.