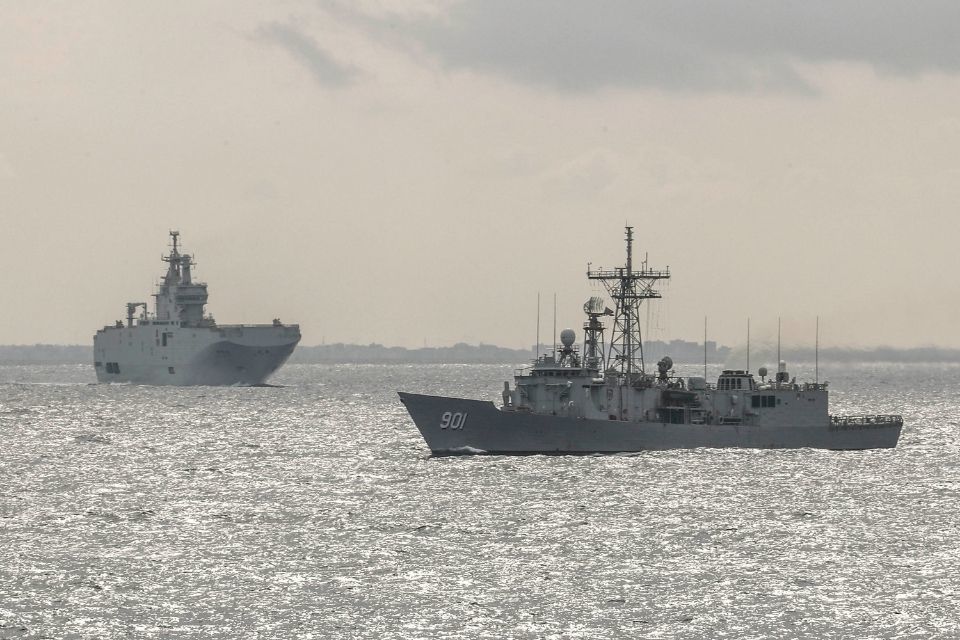 The bilateral amphibious exercises aimed to enhance interoperability and exchange knowledge and expertise to counter common maritime challenges that the two nations’ navies are facing in the Mediterranean region.

While in Alexandria, the Royal Navy exchanged a series of briefings on naval operations and amphibious warfare with their Egyptian counterparts. With strict COVID-19 precautions in place, these preparations also allowed both Navies to develop a fully integrated and complex sea training phase that was supported by warships from the Egyptian Navy, multi-role combat aircrafts from the Egyptian Air Force and a fleet of landing craft from both nations. ALBION also welcomed onboard the UK Minister for Armed Forces, James Heappey MP, plus senior members of the Egyptian Naval Forces.

During the sea phase, HMS ALBION and HMS DRAGON were joined by Egyptian Navy’s Amphibious Assault Ship and Mistral-class helicopter carrier ENS ANWAR EL SADAT, the Frigate ENS SHARM EL SHEIKH and the Fast Attack Craft ENS ALI GAD. The training included an Air Defence Exercise and Surface Warfare Exercise to ensure that the UK-Egyptian Navies’ Task Groups can operate together and protect each other in tactical formations.

The past few days have witnessed some truly exciting cooperation between the UK and the Egyptian military, focussed on developing and sharing expertise in amphibious operations. These exercises saw the participation of HMS Albion – the Royal Navy’s flagship – as well as other elements of the British armed forces. Together with the recent visit of the UK Minister for the Armed Forces, these joint exercises demonstrate our commitment to work with Egypt in the interests of both countries. Strength, modernity, partnership – this is what the UK armed forces offer. I look forward to more cooperation of this kind in the future.

The recent bilateral maritime and amphibious exercises were a great success for both nations and provided an important opportunity to enhance interoperability. They reflect the growing strength of UK-Egyptian bilateral defence cooperation and partnership, particularly in the maritime domain. The exercises have also demonstrated the UK’s steadfast commitment to work with Egyptian partners to support regional security and stability within the Eastern Mediterranean.

The LRG(X) deployment in the Mediterranean, Black Sea and North Africa was formed to work with regional allies and partners in order to test experimental concepts to develop the Future Navy and Future Commando Force. After leaving Egypt, the task group will come under command of NATO for a period of support to Operation SEA GUARDIAN, which delivers Maritime Security activity across the Mediterranean Sea.

International Affairs Foreign Secretary statement on the expulsion of pr…
0
✖