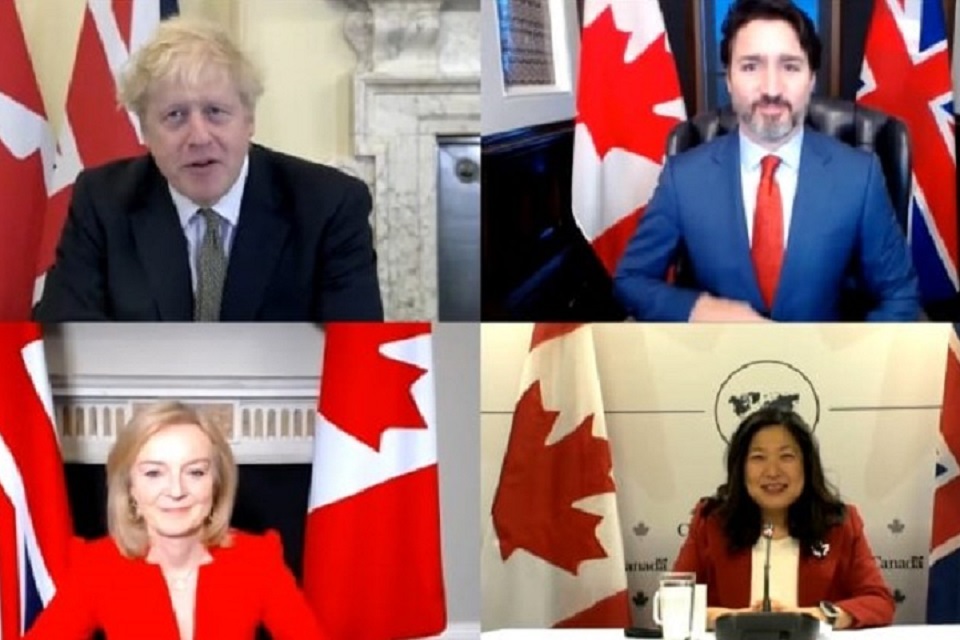 The UK and Canada have locked in their existing trading relationship, worth £20 billion, and agreed to begin negotiating a new more ambitious trade deal as early as next year.

Today’s agreement to rollover provisions of the Comprehensive Economic and Trade Agreement (CETA) gives certainty for UK businesses exporting goods and services to Canada worth £11.4 billion. It will support the British automotive manufacturing and food and drink industries which between them provide jobs for more than half a million people across the UK.

Overall, an estimated £42 million tariff burden on UK exports has been saved. The benefits locked in under the agreement reached today include:

The deal secured today provides the foundation for both countries to negotiate a new trade deal, that will improve on the existing EU-Canada agreement. It will be tailored for the British economy with the potential to go further in new areas like digital trade, women’s economic empowerment and the environment.

Today’s announcement means that it in under two years, the UK government has agreed trade deals with 53 countries accounting for £164bn of UK bilateral trade. It also takes us one step closer to accession to the Comprehensive and Progressive Agreement for Trans-Pacific Partnership (CPTPP), of which Canada is a member. CPTPP is a key part of our trade negotiations programme, helping businesses secure more opportunities in 11 key Pacific markets.

This is a fantastic agreement for Britain which secures transatlantic trade with one of our closest allies. British businesses export everything from electric cars to sparkling wine to Canada, and today’s deal will ensure that trade goes from strength to strength.

Our negotiators have been working flat out to secure trade deals for the UK, and from as early next year we have agreed to start work on a new, bespoke trade deal with Canada that will go even further in meeting the needs of our economy.

Today’s agreement underpins £20 billion worth of trade and locks in certainty for the thousands of jobs. We look forward to striking a new more ambitious deal next year with the aim of creating more opportunities for businesses and improving the lives of people across the country.

The UK is bonded by history, culture and transatlantic trade with our friends and allies in Canada, and we want to continue to build partnerships around the world that support our shared values of freedom and democracy, and today marks another step towards membership of a group of like-minded nations- the Trans-Pacific Partnership.

This is great news for trade, paving the way for a new UK-Canada trade deal in the future.

The agreement will deliver a massive boost for Scottish businesses. Last year, 814 businesses in Scotland exported goods to Canada, worth £411 million, and we can look forward to this increasing in the years ahead.

Scotland’s world-famous products, including Scotch beef, Scotch Whisky, Scottish salmon and other seafood are set to benefit from this agreement.

This deal shows that huge opportunities lie ahead as we leave the EU.

Today’s agreement also guarantees tariff-free access to the Canadian market for British wine and spirits and ensures that the UK and Canada can continue to work towards recognising each other’s qualifications in areas including accountancy, architecture and law.

All nations and regions will benefit from preferential access to Canadian markets. For example, together the West Midlands and North West regions exported over £1.2 billion worth of goods to Canada last year, while Scotland and Northern Ireland collectively exported £1 billion.

Agreeing a deal with Canada that secures continuity of trade is great news for businesses on both sides of the Atlantic.

Whether it’s manufacturers still sending their products between the two counties tariff-free, or UK firms being able to sell their services into the Canadian market, this is a real milestone.

The signing of this deal can now lay the foundations for an even deeper trade agreement, tailored to both economies. Business stands ready to work with government to achieve that goal and to promote opportunities with Canada.   Miles Beale, Chief Executive of the Wine and Spirit Trade Association, said:

This is a good result for the UK wine and spirit industry. Canada is an important market that is growing for UK exporters, particularly our small and medium sized gin and English wine exporters.

This agreement doesn’t just confirm the continued removal of tariffs, but gives us some extra footing and mechanisms to engage with the Canadians on their complex alcohol market, which is controlled at a provincial level. It should allow UK businesses to be more competitive in the Canadian Liquor Board system and that’s a positive step in helping us to grow in the market.

Now with retailers in major Canadian cities such as Toronto, Montreal and Vancouver the brand, represented by Pfaff Automotive, has seen a four-fold growth in sales over the past eight years.

Combining leading-edge technology that enhances owner experience and hand-built personalised luxury, McLaren is poised to sell its 1,000th supercar in Canada before the end of the year.

As an innovative British-based bespoke manufacturing business exporting to meet a growing demand for McLaren’s supercars among Canadian buyers, today’s news that the UK and Canada have secured a continuity trade agreement is welcomed. It provides added certainty and continuity both for us and our Canadian retail partners, customers and employees as we continue to build our presence in this key global market.

There was always a danger that the end of the transition period would mean losing wider international market access that we enjoyed as part of EU membership. So it’s really encouraging to see new trade deals secured with trading partners like Canada, long since seen as a crucial market by small firms. The fact that this new agreement upholds the small business chapter that was previously in place is very welcome. We look forward to such chapters being at the centre of all future UK trade deals.

The UK-Canada Trade Continuity Agreement will be subject to final legal checks before it is formally signed.