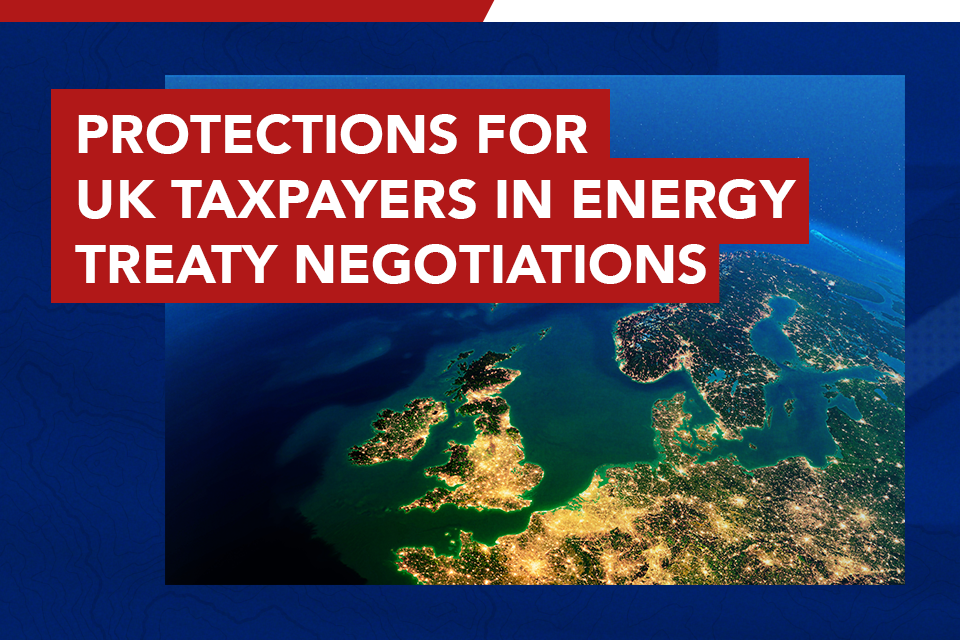 The UK has reached a landmark agreement to modernise the terms of the Energy Charter Treaty (ECT), maintaining its current benefits but winning new legal protections for taxpayers and investors.

This successful outcome follows 2 years of international negotiations and supports the Prime Minister’s recent Energy Security Strategy by establishing new protection for taxpayers and private sector investors, and reducing the risk of potential costly legal challenges on the road to net zero by 2050.

Today’s announcement concludes 2 years of negotiations between 53 contracting parties to modernise the outdated ECT. The treaty provides the framework for international trade and investment on energy matters but was drafted and first published in 1994, in a world when fossil fuels dominated power generation.

The modernised treaty, which is due to be signed in November 2022, will have a much stronger focus on promoting clean, affordable energy. It will protect the UK government’s sovereign right to change its own energy systems to reach emissions reductions targets in line with the Paris Agreement.

For the first time, it will ensure legal protections for overseas investments into the UK in green technologies, such as Carbon Capture, Utilisation and Storage and low-carbon hydrogen production, alongside other renewables. This will help give private investors in these types of technologies increased confidence as the technologies develop.

The UK cannot support an outdated treaty which holds back investment in clean energy and puts British taxpayers at increased risk from costly legal challenges.

Our success in negotiating a modernised treaty will boost our move to cheaper and cleaner energy by providing greater confidence to the private sector investors and risk takers we need for this transition.

The move comes as several EU countries, including Italy, Poland, and Slovenia face costly legal challenges over reducing reliance on fossil fuels and growing their renewable industries, which could cost their taxpayers billions of pounds. The Netherlands is currently facing a challenge over its phase out of coal, which could cost its citizens $1.4 billion.

Renewables now generate around 40% of the UK’s electricity, compared to just 0.3% when the treaty was drafted in 1994. During that time the cost of renewables have dropped significantly, with wind power halving in cost since 2012, while gas prices have increased almost four-fold.

The UK will continue to protect investments in efficient abated gas power – gas power stations with carbon capture technologies attached to them. Other than that, overseas investors in new North Sea oil and gas will not be able to make legal claims against the UK under the treaty from the point that the changes come into effect.

Coal is the only exception, which will lose protections from 1 October 2024 – the date when coal’s role in energy generation in the UK will cease.

The UK government remains committed to supporting the North Sea, with homegrown oil and gas playing a key role in the UK’s energy security. Ministers are working closely with industry and have secured joint investment of up to £16 billion through the North Sea Transition Deal to support it in exploiting new technologies like hydrogen production and Carbon Capture Usage and Storage, which gain new protections under the Energy Charter Treaty – helping them cut production emissions by 50% by 2030.

Director of Policy at the Association for Renewable Energy and Clean Technology, Frank Gordon, said:

Any measure that encourages investment in renewable energy and supports the transition to net zero is a welcome development. We need to urgently move to clean, green energy, and renewables are the quickest and cheapest way to achieve this.

We hope this modernised treaty will help boost investment in the sector, both here in the UK and around the world.

The changes to the treaty align with the UK’s commitment to reach net zero by 2050, helping step up investment in homegrown clean renewables and gradually phasing out protections for fossil fuels. This includes a pledge to a fivefold increase in offshore wind capacity to up to 50GW by 2030 – enough to power every UK home – along with a doubling of up to 10GW of low-carbon hydrogen production capacity to help power industry and transport, and a fivefold increase in solar capacity by 2035.

Members of the Energy Charter Treaty, including the UK, have been in negotiations since 2020 to modernise the treaty in line with modern day international treaty practice and to reflect modern energy priorities. See the final treaty.

The modernised treaty has a stronger climate focus, clarifying that states can regulate to reach emissions reductions targets. It also includes new protections for green and low-carbon technologies, such as Carbon Capture and Storage and hydrogen. It allows ECT members to phase out investment protections for fossil fuels in their own territories in line with respective decarbonisation plans.

The UK has never faced an investor-state dispute under the ECT that has proceeded to arbitration.

The modernised ECT is in line with modern day international treaty practice, including investment protection provisions which provide greater clarity with regards to the nature of the protections provided under the ECT and the recourse available to investors where protections are not upheld.