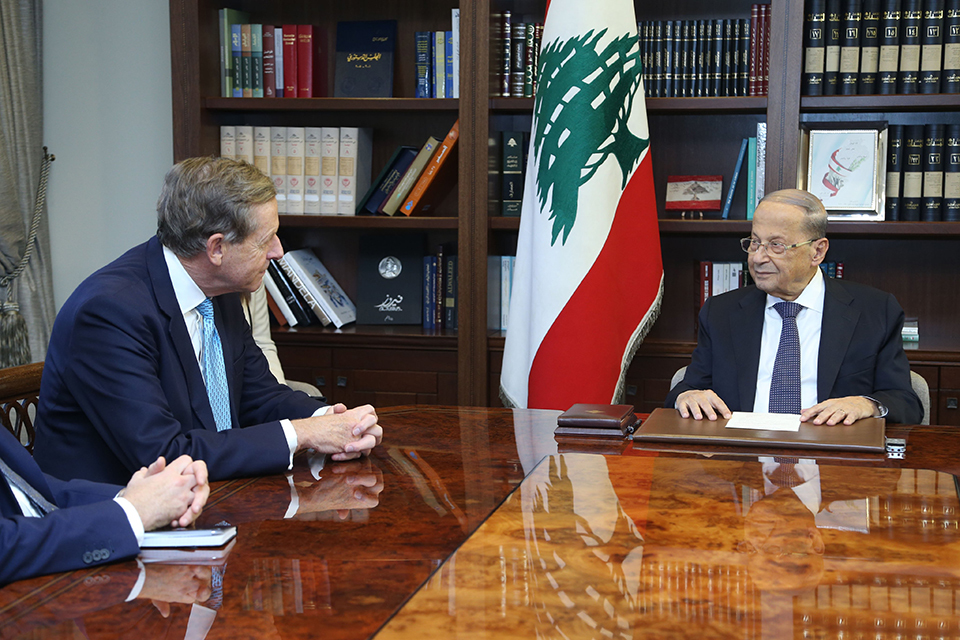 Trade Envoy to Lebanon Lord Richard Risby, ended a two-day visit to Lebanon. Lord Risby is the first trade envoy assigned to Lebanon by the UK Prime Minister, a role dedicated to deepening trade and investment ties between the UK and Lebanon.

During his visit, Lord Risby met with a wide range of political, economic and business figures and officials including President Michel Aoun, Prime Minister Saad Hariri and Speaker Nabih Berri, in addition to MP’s, Ministers for Economy, Energy, Transport and Telecommunications.

Discussions focused on various economic and trade issues including the UK’s growing bilateral trade relations with Lebanon after the signature of the Association Agreement during the UK-Lebanon Tech Forum in London on 19 September. This agreement provides a platform for trade between the UK and Lebanon to grow, with total trade worth £603 million in 2018. It also provides the certainty for British and Lebanese consumers and businesses to continue trading following the UK’s withdrawal from the EU. The agreement will provide a framework for cooperation on and development of political, economic, social and cultural links.

Lord Risby’s visit comes at a challenging time for Lebanon. Earlier this month the Government of Lebanon set out further proposed reforms on top of those already committed to at CEDRE. Lord Risby discussed how the UK can continue to support these reforms, including through the Capital Investment Programme, and getting more UK companies involved in infrastructure projects, oil and gas and other opportunities. Lord Risby also visited the Beirut Container Terminal Consortium – operating Beirut Container Port – a joint venture between Lebanese and UK companies that has in over 15 years created more than 3000 local jobs, boosted container handling four-fold to 1.2 million.

At the end of his visit, Lord Risby said:

I am pleased to visit Lebanon for the first time after my appointment as the Prime Minister’s Trade Envoy for Lebanon, a country that has great trade and business potential. It is clear there is much work to be done to address the areas of economic concern here, but UK-Lebanese relations have never been stronger. On 19 September we saw Lebanese and UK Ministers sign the UK-Lebanon Agreement in London which signals continuity and confidence in our trading relations as the UK leaves the EU.

My meetings with Lebanese officials and senior business people highlighted Lebanon’s great potential and unfolded opportunities for more UK private companies to invest in Lebanon. I look forward to more British and Lebanese companies doing business with each other, as the UK remains a committed partner investing in Lebanon’s security, stability and prosperity’.

At a reception held in honor of Lord Risby, Ambassador Chris Rampling addressed his guests from across the business, trade and political spectrums saying:

It’s a great pleasure to receive Lord Risby whose role is dedicated to deepening trade and investment ties between the UK and Lebanon. Coming less than a year after the inaugural investment forum between the UK and Lebanon last December, and the Association Agreement signature between both our countries in London on 19 September, this is a clear demonstration of how rapidly our two countries ties have grown stronger.

As I have said before, the UK supports the Government of Lebanon’s programme and CEDRE: economic reform will be painful, but it is urgent for Lebanon to regain confidence. The Association Agreement is truly an important milestone in UK and Lebanese relations, which are stronger today than ever before. Britain remains firmly behind Lebanon’s steps towards long-term security, stability, and prosperity.