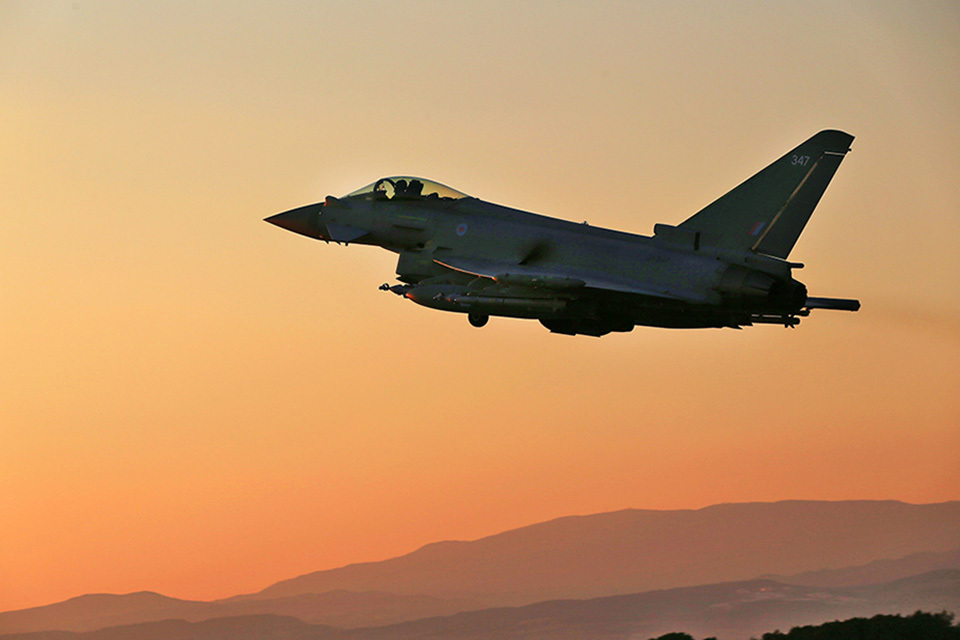 As part of the UK’s contribution to the Global Coalition in the fight against Daesh, the Royal Air Force continues to fly daily missions against the terrorist movement in Syria and Iraq. Our aircraft conduct strikes on terrorist targets when required.

Intelligence analysis confirmed that a Daesh leadership group had established a cave network 85 miles west of Kirkuk in northern Iraq. An RAF Reaper kept a close watch on the location during the early hours of Thursday 20 August. When terrorists were identified at the cave entrance, the Reaper’s crew conducted an attack with a single Hellfire missile, having first swept the area for any signs of civilians who might be placed at risk. The missile struck the target accurately, and the blast was observed to emerge from another part of the cave network, indicating that weapon’s effect had reached deep inside the caves.

In addition to this, an RAF Reaper maintained surveillance on another set of caves in the area on Wednesday 26 August, which confirmed the presence of a number of Daesh extremists at the site. When terrorists were observed at the mouth of one of the caves, the Reaper’s crew engaged successfully with a Hellfire missile, then provided surveillance support to a follow-up attack by two coalition fast jets which struck the rest of the Daesh position.

As part of the UK Armed Forces’ contribution to the global coalition against Daesh, our aircraft have continued to fly armed reconnaissance patrols in support of the Iraqi security forces, striking terrorist targets as necessary.

A Royal Air Force remotely piloted Reaper investigated on Sunday 31 May a location in northern Iraq, some seventeen miles west of Tuz Khurmatu, where a Daesh group had been identified as having established themselves at a bunker situated in the mountains. The Reaper’s crew conducted a thorough check of the area, finding no signs of any civilians nearby, but confirming the presence of several terrorists close to the bunker itself, who were attempting to conceal themselves in heavy foliage. The Reaper therefore conducted two attacks in succession, destroying the bunker with a GBU-12 guided bomb, then hitting those terrorists who were outside the bunker with a Hellfire missile.

On Wednesday 3 June, a pair of Typhoon FGR4s, supported by a Voyager air refuelling tanker, joined other coalition aircraft in an operation against Daesh positions which had been identified on a mountainous ridge some thirty-five miles north-west of Kirkuk. Having confirmed that there were no signs of civilians in the area, the Typhoons provided surveillance support to a strike by coalition jets, and were then allocated a cave, occupied by Daesh, as their own target. This position was struck with a single Paveway IV guided bomb, and Iraqi ground forces subsequently confirmed the attack to have been a success.

A further group of caves, situated thirty miles north-west of Tikrit, were confirmed as being used by Daesh both as accommodation and storage for improvised explosive devices. Two Typhoons were accordingly tasked to attack the terrorist position on Monday 22 June. Having checked the area for any civilians who might be at risk, four Paveway IVs were successfully used to strike four carefully selected targets within the cave network.

Intensive coalition surveillance efforts were able to confirm that another group of Daesh terrorists had established themselves in a cave network in the Makhmur mountains of northern Iraq. RAF Typhoons were therefore tasked with the destruction of this terrorist base on Wednesday 24 June. After the usual precautionary check of the area for civilians, our aircraft attacked with four Paveway IVs, all of which struck their targets successfully.