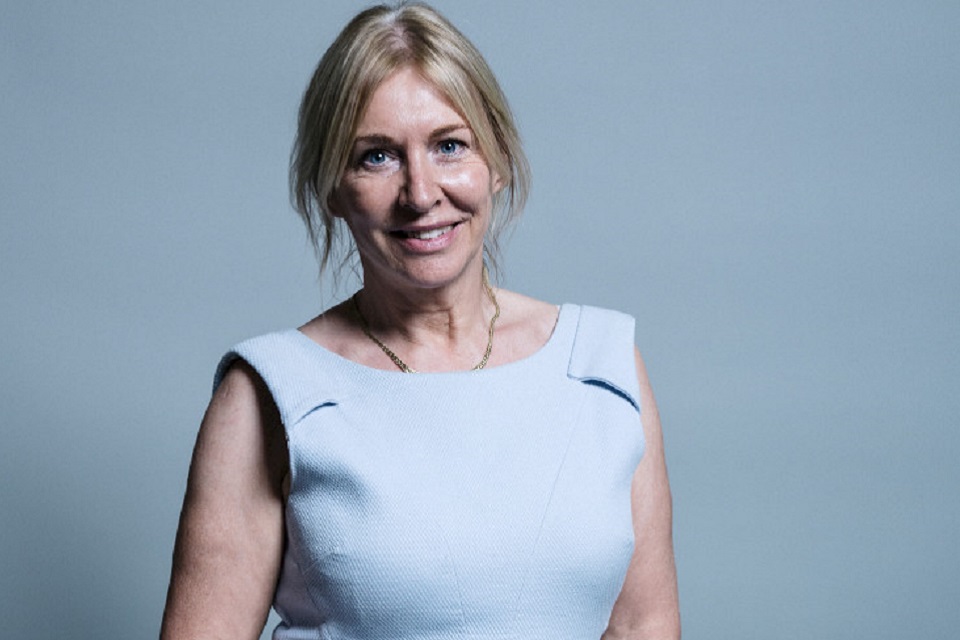 The report of the Independent Medicines and Medical Devices Safety Review (IMMDS Review) was published on 8 July last year. I would like first to sincerely thank Baroness Cumberlege and her team for their work on the review. I also pay tribute to the women and their families who bravely shared their experiences and brought these issues to light. Without their tireless efforts to have their voices heard, this review would not have been possible.

The overriding question investigated by the review is how the health and care system listens and responds to patient concerns raised by patients, and women in particular. We must not forget that the Cumberlege Review, alongside other independent inquiries including the Paterson Inquiry, was commissioned because women did not feel listened to or their concerns acknowledged – today is another step towards righting this.

On the Paterson Inquiry, I would also like to provide a very brief update. Work on the government response was temporarily paused last Spring due to the first wave of the COVID-19 pandemic. Efforts have since resumed at pace, and I can confirm today that I will announce and publish the government’s initial response in Parliament shortly.

Returning to the IMMDS Review, many of the report’s recommendations have already been discussed in detail during the committee stage of the Medicines and Medical Devices Bill, and this has helped us to determine our future direction. We are very grateful to members from both Houses who have worked with us on this.

I am today updating the House on the government’s response to the report of the IMMDS Review, taking each recommendation in turn.

In July, when I introduced this report to the House, I made an unreserved apology on behalf of the health and care system to those women, their children and their families for the time the system took to listen and respond. I assure those affected that the government has listened, and will continue to listen.

The central recommendation in the report is for the establishment of an independent Patient Safety Commissioner. This recommendation has rightly ignited much interest and debate in both Houses, and the government has listened carefully to the arguments made for a commissioner, and how this might sit within the wider patient safety landscape.

Patient safety is a key priority for the healthcare system. In my role as Minister of State for Patient Safety, I often hear from and meet with people who have been affected by issues of patient safety. Their stories have common themes – of suffering avoidable harm, of not being listened to and of a system that is then difficult to navigate when things go wrong. We want to make the NHS as safe as anywhere in the world, and we must retain an absolute focus on achieving this goal.

I can therefore confirm that the government tabled an amendment to the Medicines and Medical Devices Bill before the Christmas recess to establish the role of an independent Patient Safety Commissioner, in line with Baroness Cumberlege’s second recommendation.

The commissioner’s core duties will be to promote the safety of patients and the importance of the views of patients in relation to medicines and medical devices. To help in carrying out these duties, the commissioner will have a number of powers and functions, including the ability to make reports and recommendations to the NHS and independent sector, and to request and share information with these bodies.

The government looks forward to working with members of both Houses to ensure this new post acts as a beacon for listening and reflecting the safety concerns of patients, so that we can drive positive culture change in our healthcare system.

Recommendation 3: a new independent Redress Agency for those harmed by medicines and medical devices should be created based on models operating effectively in other countries. The Redress Agency will administer decisions using a non-adversarial process with determinations based on avoidable harm looking at systemic failings, rather than blaming individuals.

The government has no current plans to establish a redress agency as set out in recommendation 3. The government and industry have previously established redress schemes without the need for an additional agency.

Recommendation 4: separate schemes should be set up for each intervention – hormone pregnancy tests (HPTs), valproate and pelvic mesh – to meet the cost of providing additional care and support to those who have experienced avoidable harm and are eligible to claim.

Recommendation 4 on redress schemes for sodium valproate, mesh, and HPTs remains under consideration.

Recommendation 5: networks of specialist centres should be set up to provide comprehensive treatment, care and advice for those affected by implanted mesh; and separately for those adversely affected by medications taken during pregnancy.

These services will bring together leading experts to provide multi-disciplinary care and treatment for all women who have experienced complications due to vaginal or abdominal mesh procedures.

With a centre in every NHS region, these new services will ensure nationwide provision, and centres will work together to hone their expertise and share best practice.

We continue to consider the second part of recommendation 5, which is for specialist centres for those adversely affected by medicines in pregnancy.

Recommendation 6: the Medicines and Healthcare products Regulatory Agency (MHRA) needs substantial revision particularly in relation to adverse event reporting and medical device regulation. It needs to ensure that it engages more with patients and their outcomes. It needs to raise awareness of its public protection roles and to ensure that patients have an integral role in its work.

Patient safety is the MHRA’s top priority. The MHRA recognises that the major changes highlighted by the report, particularly recommendation 6, are very important.

The MHRA has already begun a substantial programme of work to improve how it involves patients in all aspects of its work, to reform systems for reporting adverse incidents with medicines and medical devices, and to strengthen the evidence base for its regulatory decisions.

Within the MHRA’s work to strengthen the evidence base, the safety of medicines in pregnancy is of utmost importance.

In the UK, three-quarters of a million babies are born each year, and more than half of expectant mothers will need to take medicines when pregnant. We must ensure that women have high-quality, accessible information to be able to make informed decisions about their healthcare.

To that end, I would like to highlight two important developments of MHRA reform.

Firstly, the MHRA Expert Working Group on Optimising Data on Medicines used During Pregnancy is today publishing its report which recommends ways in which healthcare data can be better collected and made available for analysis. This will enable the generation of better evidence on medicines used in pregnancy and will be vitally important when developing clear and consistent advice for women.

Secondly, the MHRA has established a Safer Medicines in Pregnancy and Breastfeeding Consortium. This brings together 16 leading organisations from across the NHS, regulators, and key third sector and charitable organisations. Today, they are launching a strategy setting out how they will work to improve information on medicines for women who are thinking about becoming pregnant, are pregnant, or are breastfeeding.

On sodium valproate, in response to concerns raised during the previous debate on the IMMDS Review, I am pleased to announce that the National Director of Patient Safety has recently established a Valproate Safety Implementation Group.

This Valproate Safety Implementation Group will drive forward work to reduce harm from valproate through taking action to reduce the number of women prescribed valproate, and improving patient safety for women for whom there is no alternative medication, for example by increasing adherence to the Valproate Pregnancy Prevention Programme. The Programme will ensure that every girl or woman knows about the risks of valproate in pregnancy, that where appropriate she is on effective contraception, and that she has a review by her specialist prescriber at a minimum once a year, when a risk acknowledgement form will be discussed and signed by both prescriber and woman herself. Importantly, the Valproate Safety Implementation group will work with patients to understand how women can be supported to make informed decisions about their health care.

In addition, last week the MHRA published the conclusions of a safety review into antiepileptic drugs conducted by the commission on Human Medicines. This will help clinicians identify safer alternatives to valproate for the treatment of epilepsy in women who may become pregnant.

I am also pleased to announce that the first data from the new Valproate Registry will become available later this month. The registry is being developed by the MHRA and NHS Digital, and will support work to monitor adherence to the Valproate Pregnancy Prevention Programme, and allow for long-term individual patient follow up.

Recommendation 7: a central patient-identifiable database should be created by collecting key details of the implantation of all devices at the time of the operation. This can then be linked to specifically created registers to research and audit the outcomes both in terms of the device safety and patient reported outcomes measures.

The seventh recommendation in Baroness Cumberlege’s Report rightly reflects on the importance of collecting the right data for monitoring the safety of medical devices. We recognise the need for improved data collection and analysis for medical devices.

That is why the government acted in June last year to amend the Medicines and Medical Devices Bill to create the power to establish a UK-wide medical device information system prior to the review report being published, as we recognised the need to deliver such an information system. This system will mean that in future, subject to regulations, we can routinely collect medical device, procedure and outcome data from all NHS and private provider organisations across the UK, ensuring that no patient in the UK falls through the gaps.

The government is grateful to members in both Houses, including Baroness Cumberlege, for their support for establishing a medical device information system.

Recommendation 8: transparency of payments made to clinicians needs to improve. The register of the General Medical Council (GMC) should be expanded to include a list of financial and non-pecuniary interests for all doctors, as well as doctors’ particular clinical interests and their recognised and accredited specialisms. In addition, there should be mandatory reporting for the pharmaceutical and medical device industries of payments made to teaching hospitals, research institutions and individual clinicians.

The government is considering recommendation 8, which is that doctors’ financial and non-pecuniary interests should be declared and publicly available.

Any publication of declarations of interest should cover all clinical decision-making staff, not just doctors: it would also need to be held where patients could most easily access and interpret the information, with appropriate governance arrangements. We will consider these issues in discussion with the GMC, other stakeholders and the patient reference group to ensure the views of patients are listened to and incorporated.

The government has no plans to establish an independent taskforce to implement the report’s recommendations. A cross-system working group has already been set up, meeting regularly, to develop the government’s detailed response to the report.

However, the government recognises the need for effective patient engagement both to build trust, and ensure effective implementation. I am pleased to announce today that we are establishing a Patient Reference Group, which is part of Baroness Cumberlege’s ninth recommendation. The Patient Reference Group will ensure that patient voices are heard as we move forward towards a full response to the report.

The report of the IMMDS Review powerfully demonstrates the importance of hearing the patient voice in patient safety matters. The actions outlined here demonstrate the government’s commitment to learning from this report, and will support vital work already underway to hear the voice of the patient as part of the NHS Patient Safety Strategy. We currently plan to respond further to the report of the IMMDS Review during 2021.