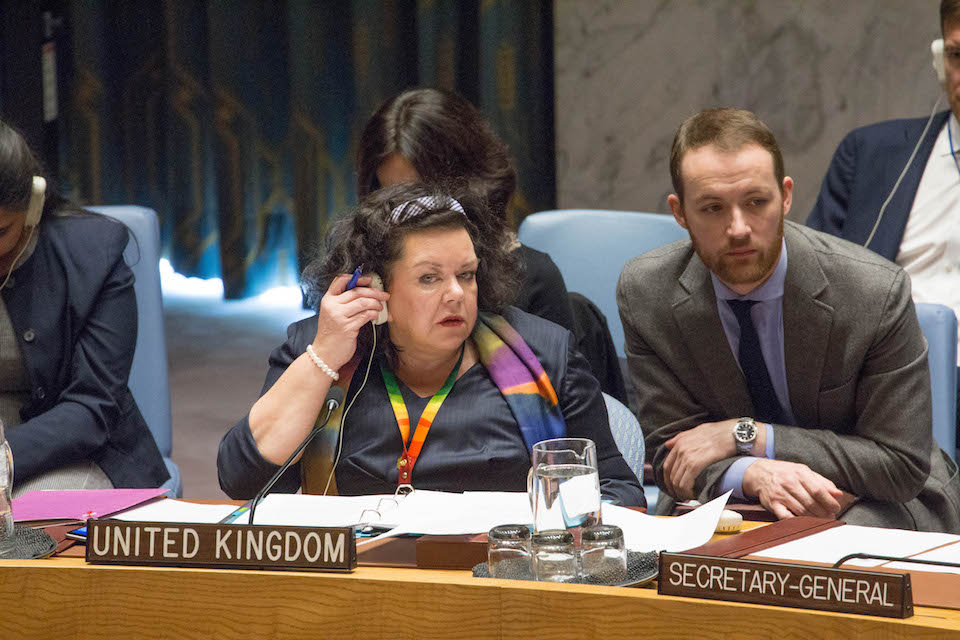 Thank you very much, Madam President.

Thank you to the Under-Secretary-General, to the head of the EU delegation, and very good to have our Iranian colleague with us.

When I spoke to the Council in June, Madam President, I said that the United Kingdom remained committed to the JCPOA and this commitment stands. The JCPOA is critical to the wider global nonproliferation architecture, and it’s vital for our national security and the shared security of our partners and allies. We believe it is the best means to avert a nuclear armed Iran.

As we have said before, we regret the US decision to leave the JCPOA and reimpose sanctions on Iran. We’ve said this in our most senior levels and on the public record and we understand the impact this has had in Iran and on the Iranian people.

Our commitment to the JCPOA and its instruments, including the procurement channel, is evidenced by our work as co-chair of the Arak modernisation project and with E3 partners on INSTEX. We therefore deeply regret Iran’s decision to reduce compliance with the JCPOA. At the Joint Commission on 6 December, we made our concern clear: Iran’s actions are extremely serious. They are hollowing out the nonproliferation benefits of the nuclear deal and are not all reversible.

As the United Kingdom, we have made clear our determination to find a way forward and to address Iranian non-compliance through the JCPOA, including the Dispute Resolution Mechanism. This is not a step we want to take, but Iran’s actions are leaving us little option other than to respond within the parameters of the agreement. Should we be forced down the path of triggering the DRM, we would do so in order to find a diplomatic way forward with the aim of protecting the agreement.

Madam President, Iran faces a stark choice: continue down this damaging path or take immediate steps back into compliance and rebuild international confidence.

Iran argues that the provisions in 2231 are not legally binding. They have also taken issue with the E3 use of MCTR categories to define nuclear capable missiles.

Madam President, we should be clear: the definition encapsulated in the MTCR is the most objective, widely accepted standard of nuclear deliverability in the world. It is internationally recognised and observed by states which seek to prevent the proliferation of ballistic missile technology, capable of carrying weapons of mass destruction. For many states, it is incorporated into their national legislation.

The purpose of the provisions in Annex B paragraph 3 is to give the international community confidence that Iran is not developing technology capable of serving as a means of delivery for a nuclear weapon. In undertaking the activity described in the E3’s communications to the Security Council, Iran is not providing much confidence.

Madam President, turning to regional activity, during the last year, there has been a continued increase in Iran’s destabilising activity around the Middle East, including activities which are inconsistent with UNSCR 2216 and other resolutions. In May and June, we saw attacks on commercial shipping near Fujairah and in the Gulf of Oman. A thorough UK assessment concluded that both attacks were almost certainly the work of the Islamic Revolutionary Guard Corps. Likewise, the IRGC was almost certainly responsible for May’s attack on the Yanbu pipeline near Afif. And then, in September, we witnessed a large-scale drone and missile attack against Aramco Oil facilities in Saudi Arabia. This was a reckless, destabilising and completely unacceptable attack affecting more than 5 percent of the world’s oil and gas production.

Madam President, as the UK, France and Germany have made clear, we are confident that Iran bears responsibility for that attack. The Houthi claim of responsibility is implausible for a number of reasons, not least the scale, sophistication and range of the attack.

Iran has also transferred missiles to a number of armed groups in violation of several Council resolutions, including 2231, 2216 and 2514. The latest Secretary-General report details concerning evidence regarding the transfer by Iran into Yemen of UAVs and optical sights of rocket-propelled grenade launchers. Such proliferation is destabilising for the region and escalates already high tensions and should stop.

Current tensions in the region remain deeply concerning. Further escalation is in no one’s interest, and I want to, once again, call for de-escalation, dialogue and full respect for international rules.

Madam President, I note the interest of some members of the Council and of Iran in resolution SCR 598 about regional dialogue. At the right time, and if genuinely intentioned, this may be able to play a useful role. But I think both timing and intent are critical ingredients, if any initiative on those lines is to get off the ground in the right way.

Madam President, we continue to hope that Iran will take steps to regain the confidence of the international community and assume its rightful role as a prosperous, responsible power, constructively engaged in the region. We respect the Iranian people. We have deep respect for Iran’s civilisation and the achievements of her past. But I urge Iran not to undertake any more actions that would take her further beyond JCPOA limits and instead to work closely and in good faith with other participants to implement its commitments fully and to help reduce escalating tensions in this region of the world.

Upholding the JCPOA and preventing attacks and escalating tension

International Affairs Change of Her Majesty’s Ambassador to Denmark &#…

International Affairs Bringing coordinated relief to the people of Syria…
0
✖