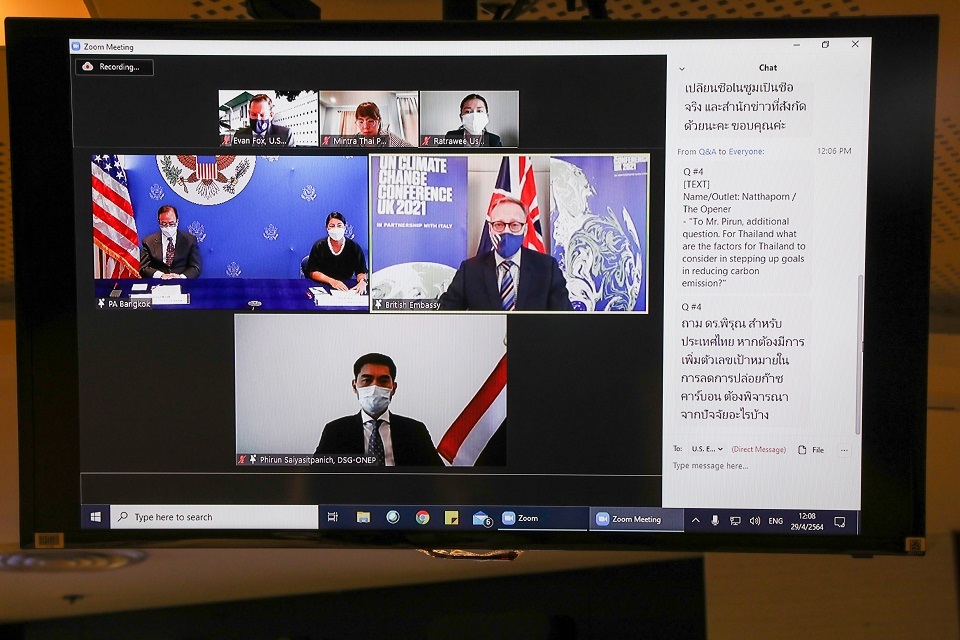 However, Global Justice Now argues that Biden’s climate pledges are not enough, stating that ‘The world’s richest country should be the most responsible for fighting climate change’. They also point out that ‘Climate justice campaigners in the US and globally argue that the new US NDC is not a fair share NDC.’ They explain that a ‘U.S. fair share model contribution to global mitigation must include a reduction of at least 70% domestically by 2030 compared to 2005 levels.’

Climate change is threatening futures and affecting livelihoods globally. Its real-world impacts are already all too visible, including in Thailand, which has been ranked among the top 10 most impacted countries in the world by climate change over the last 20 years. Here we have seen catastrophic flooding, drought, fires and other extreme weather events.

The Leaders Summit on Climate, hosted by the United States and held from 22-23 April 2021, brought together many world leaders, including from the UK and Thailand, as well as leaders of international organizations, businesses, and NGOs, to galvanize efforts by the major economies to tackle the climate crisis. It was a key milestone in this vital year for climate action as the world works towards the global climate negotiations at the UN Climate Change Conference (COP26) which will be held in Glasgow, UK, in November this year.

As host of the Leaders Summit, U.S. President Joseph Biden made a historic commitment to cut emissions by 50-52% relative to 2005 levels by 2030, nearly doubling the United States’ previous target. This came as the UK Prime Minister Boris Johnson announced that the United Kingdom is setting into law one of the most ambitious emission goals in the world, to cut emissions by 78% by 2035 relative to 1990 levels.

A number of other countries, including Japan, China and South Korea, have also recently announced more ambitious climate commitments or a plan to update their NDC before COP26. New targets announced ensured that nations accounting for half of the world’s economy have now committed to the emission reductions needed globally to keep the goal of limiting global warming to 1.5-degrees C within reach. Every G7 country now has an NDC that puts them on a path to net zero by 2050.

But much more needs to be done. The Intergovernmental Panel on Climate Change has stressed that to have a chance of limiting global temperature rise to 1.5 degrees we need to reduce global emissions by 45-50% by 2030. So together, the US and the UK are encouraging every country to come forward before COP26 with a more ambitious Nationally Determined Contribution (NDC) to put the world on track.

However, Global Justice Now points out that the US’s NDC is ‘what the US decided as feasible for the US instead of what is appropriate for a country, which is the biggest, baddest greenhouse gas emitter on the planet. The United States has emitted more than 400 billion metric tons of carbon dioxide into the atmosphere since the birth of the industrial revolution. Cumulatively, this makes the U.S. the biggest contributor to global carbon dioxide emissions by far, having produced almost twice the amount of emissions as the second biggest emitter, China.’

Global Justice Now also disputes the use of the term ‘net zero’, saying ‘An NDC for all countries to be a good and fair share NDC should not endorse the concept of “net zero” or “net reduction,” and other mechanisms that allow business-as-usual emissions to continue.’

At the summit, Thailand’s Minister of Natural Resources and the Environment Varawut Silpa-archa provided an update on progress in drafting Thailand’s first ever Climate Change Act and use of the Bio-Circular-Green-Economy Model, marking Thailand’s steps to reduce greenhouse gas emissions and adapt to changing climate conditions ahead of COP26.

The United Kingdom, as COP26 President, the United States, and Thailand hope to join countries around the world in setting new ambitious commitments to cut greenhouse gas emissions before COP26.

Global Justice Now provides insight into the reaction to the summmit from the Dalai Lama and 100 Nobel laureates, who wrote a letter to Biden, mentioning:

the fact that fossil fuel industry continues to plan new projects. Banks continue to fund new projects. A 120% increase in coal, oil, and gas to be produced by 2030 is truly inconsistent with limiting warming to 1.5°C. Efforts to meet the Paris agreement and to reduce demand for fossil fuels will be undermined if supply continues to grow.

They point towards that COP26 Coalition, made up of groups and individuals from across Scotland and the rest of the UK. Global Justice now have organised ‘From the Ground Up II’, as a response to Biden’s summit – a four-day online gathering with workshops, strategy discussion and a movement assembly. The Coalition made the following statement at the Global Press Conference:

Global summits dominated by rich countries and corporations — whether it’s the Biden summit or the Group of Seven (G7) in June — will not put people before profit or offer real change.

The Coalition is preparing for the COP26 in November, with this message.

We, all of us, need to act now to protect our planet for future generations. We hear Thailand’s call for greater international support, and we are committed to supporting Thailand in its journey. The UK is funding the Rice NAMA programme which Minister Varawut mentioned at the Summit. It is also supporting Thailand’s transition to clean energy and greening the financial system through the ASEAN Low Carbon Energy Programme and the support for the electric vehicle policy in Thailand.

Are the ambitious cuts and new pledges from Biden’s climate summit enough?

G7 nations commit to the safe and sustainable use of space