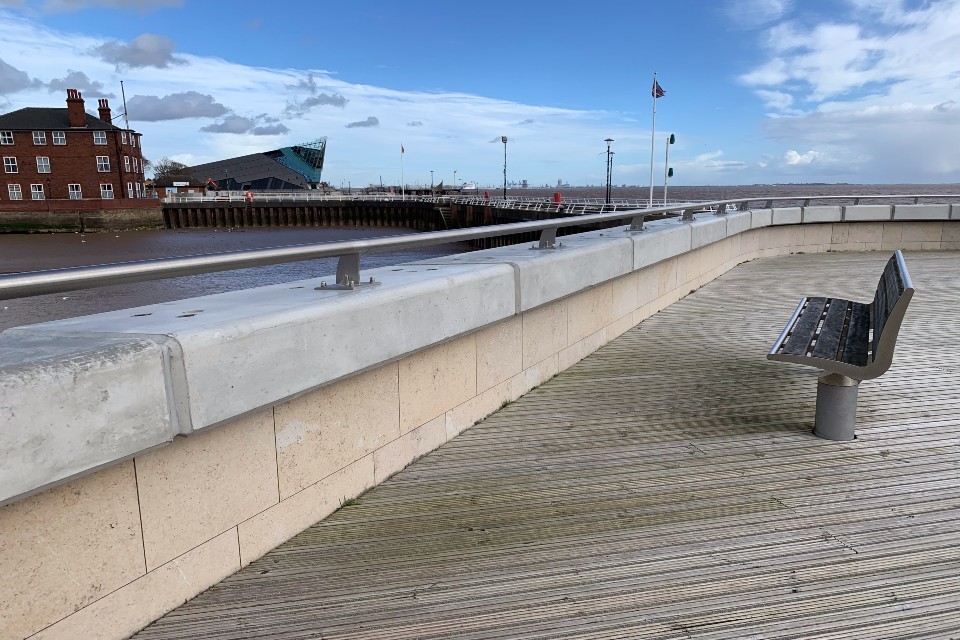 A major flood alleviation scheme to improve protection against climate change and sea level rise has reached its target of better protecting thousands of homes in Hull.

The new, higher defences built by the Environment Agency along the estuary foreshore are now in place, ready to protect the city from tidal surges.

The scheme has been key in enabling the Environment Agency to meet its ambitious target of protecting 300,000 homes from flooding across England.

We’re thrilled that we have reached this milestone. It’s a fantastic achievement and I’m very proud of what has been accomplished.

Climate change is one of the biggest global threats we face, and intense storms are becoming more frequent.

Sea level rise on the Humber in the next 100 years is likely to be in excess of one metre. The work we have now completed will better protect properties in Hull from the increasing threat of flooding.

The flood defences stretch along more than four miles (7km) of shoreline from St Andrew’s Quay Retail Park in the west to Victoria Dock Village in the east. As well as protecting homes, the work also protects major businesses in the city, such as Smith & Nephew, and makes the city more attractive to investment.

Hull is a city built on and around water. The Humber: Hull Frontages scheme is an excellent example of the infrastructure the city relies on.

The scheme achieves a high level of flood alleviation while also ensuring the important cultural, heritage and amenity link to the estuary is retained.

The scheme covers commercial, industrial, as well as residential areas, and the tidal flood defences have been designed to be sympathetic to their surroundings.

Working with Hull City Council, the Environment Agency used materials and a colour palette to blend the new defences into the existing landscape. This was particularly important within the residential areas and those of cultural significance to the city of Hull.

Work along the stretch covering St Andrew’s Quay has included a section in the shape of a boat hull which will incorporate the STAND memorial to lost trawlermen, expected to be placed in position later this year.

In other areas of the scheme, the inclusion of glazed panels into the flood walls at several locations maintains estuary views from the footpaths running parallel to the estuary which form part of the popular Trans Pennine Trail, as well as from homes at Victoria Dock Village.

The scheme was made possible through a £3 million contribution from Highways England.

We are delighted to support the Environment Agency with a £3 million contribution to this scheme. It’s fantastic to see the project is now complete, offering protection for homes and businesses as well as the A63 and A1033, reducing the risk of closures and flooding-related disruption on our roads.

The schemes links in with other flood defence improvements along the Humber being carried out by East Riding of Yorkshire Council.

In the past 75 years, there have been three major tidal surge flooding incidents in Hull (1953, 1969 and 2013), the latest in December 2013 when 264 properties were flooded when the defences were overtopped. During high spring tides, water levels in the estuary have the potential to rise by around one to three metres above some parts of the city, higher than the previous defences.

Work will continue over the next few months to complete landscaping and the aesthetic details of the scheme, including in the Victoria Pier area, with all public areas and footpaths expected to be reopened by late spring.

The work fits in with the aims of the Living with Water partnership.

Our holistic vision of a blue/green city means that as a partnership we understand the importance of providing the critical engineering solution of the frontage scheme, but we also need to look towards a natural solution around the real threat of surface water flooding which the city suffers from too.

Having a strong partnership that can address all forms of flood risk, means together we are building resilience from every type of flood risk, making our region thrive in the future.

BAM Nuttall and Mott Macdonald (BMMJV) are proud to have been able to support the Environment Agency in achieving such an outstanding level of flood protection for the people of Hull and the surrounding areas.

We’d like to especially thank the residents and businesses affected by our works for their patience and support that has allowed us to plan and manage our works effectively through the particularly challenging circumstances of the last 12 months.

In the last six years the Environment Agency and its partners have invested more than £200 million on flood management work to reduce the risk of flooding to homes and businesses in East Yorkshire and Hull.