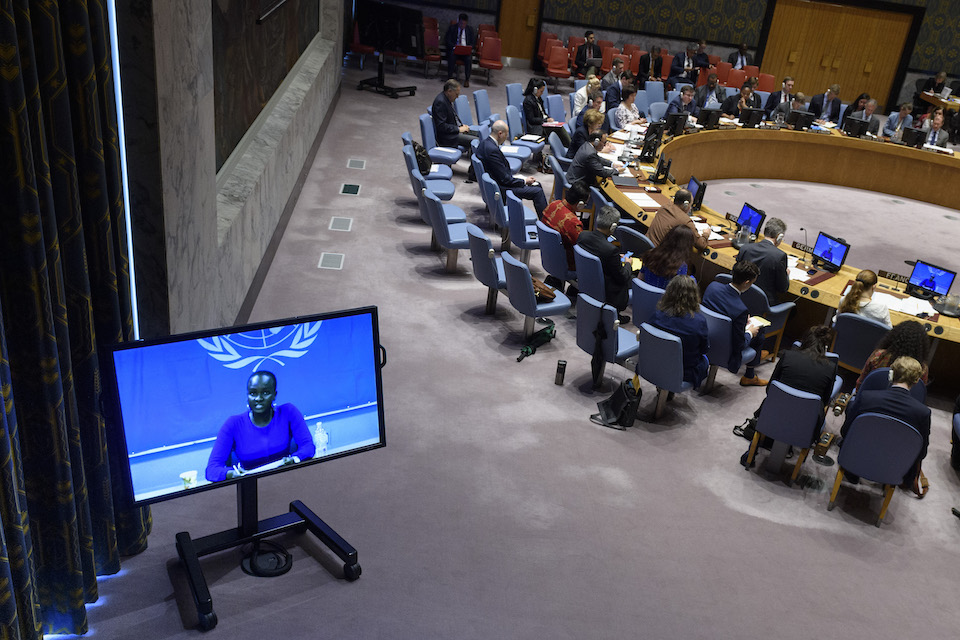 Thank you, Mr President. Thank you also to our briefers. And let me just signal our strong support for SRSG Shearer and for the men, women serving in South Sudan on behalf of us all here, for all that you are doing on the ground.

Mr President, the United Kingdom has welcomed on many occasions the genuine hope for a peaceful South Sudan that came with the signing of the peace agreement last September. And it was inspiring to hear from David Shearer about the enthusiasm and the desire of people all over South Sudan for that peace agreement to turn into a substantive and lasting peace. And I want to set out again today the strong and unwavering support that the United Kingdom has for the people of South Sudan. The briefers today have reminded us, of course, and in particular, I pay tribute in this respect to Ms Minagono, that the people of South Sudan can’t be expected to wait any longer for the implementation of a lasting peace. Not least given the still high numbers, almost seven million according to a report last week from the IPC, who face acute food insecurity. And I am struck by the fact that 89% of those surveyed believe a lasting peace is possible by the end of the year. Despite the fact that 79% of those surveyed knew of someone in their family who had been killed or forced to flee. So there is a real opportunity still in South Sudan.

However, despite a promising start, crucial tasks remain unsolved. In particular on security sector reform, agreements on state boundaries and the unification of forces. And I want today to urge all parties to make the compromises needed to unlock progress in these areas. We supported the agreement in May this year to extend the pre-transition period. As a sign of the parties desire to continue to work towards peace. And I would now echo the SRSG’s call and those of other Council members for Salva Kiir and Riek Machar to meet and to redouble their efforts to ensure that the Transitional Government is formed in November. There should be no more delays, Mr President. And there need be no more delays.

I’d also like to thank the SRSG for his efforts and those of his team to support the hundreds of thousands of South Sudanese still living in protection of civilian sites. We share the aspiration that these sites should reduce in size as the peace agreement delivers genuine improvements on the ground. And of course, we recall that the Government of South Sudan has the primary responsibility for creating a conducive environment for returns. And so urge them to play their part in creating the stability necessary for the safe, durable and dignified return of IDPs and refugees.

Now, the United Kingdom also shares ASG Gilmour’s concerns set out today about the restrictions of political and civic space. Despite the extension to the pre-transition period, progress on justice and accountability continues to stall. And defense and security forces, including the NSS, continue to threaten and intimidate those perceived as critics. The South Sudan Panel of experts’ findings on responsibility for the abduction and killing of human rights activist Dong Samuel Luak and writer and IO-member Aggrey Idri, at the highest level within the NSS are deeply troubling. As is the failure of the Government to investigate or sanction those involved. So we urge the Government of South Sudan to meet its commitments, to take steps to end the culture of impunity and of course, in particular, to sign the necessary agreements with the African Union to establish the hybrid court.

Mr President, Ms. Minagona’s presence here today is an important reminder to us all the vital role of civil society in the peace process. And she set out a number of areas where we need to see action to deliver the agreement. As I said before, her account and the account of the SRSG show that people across the country after decades of violence are starting to make rapprochement and build peace. The dire situation in South Sudan has been of serious concern to this Council for some time. But the peace agreement that was signed represented a new start, a new dawn. We all desperately, round this table, want to see progress and there is still time for that progress. But it must not be wasted. There should be no more delays. The two main actors, Salva Kiir and Riek Machar, have a responsibility to their people: to come together and resolve the outstanding issues. The region, and all of us around this table must support them. We must not let down the people of South Sudan who still have such hope in their hearts.

We must not let down the people of South Sudan