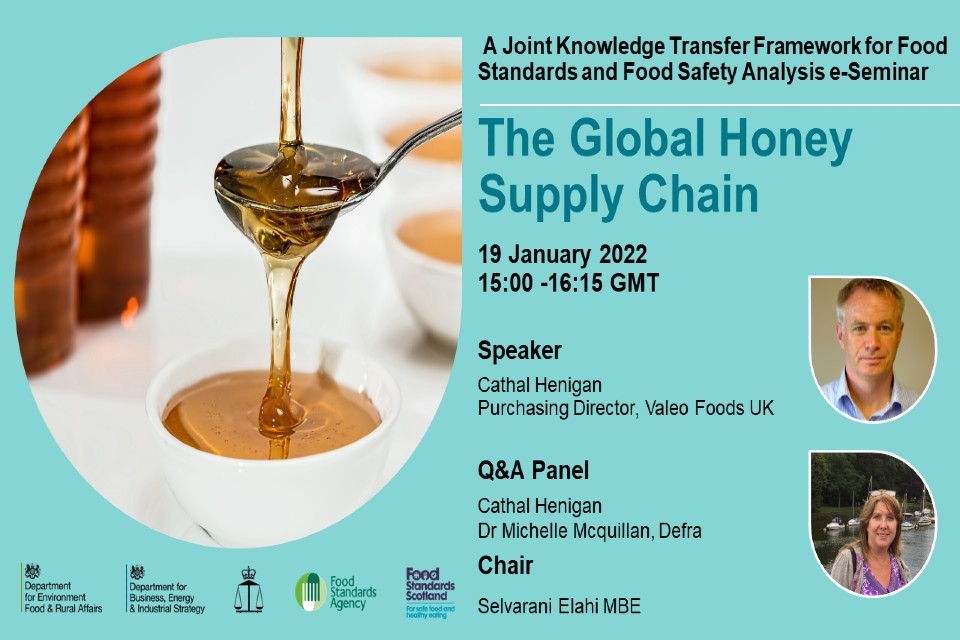 During this webinar Cathal Henigan, Purchasing Director at Valeo Foods, will explain the complexity of the global honey supply chain and provide an overview of the process of honey production, from the honeybee and beekeeper to the packer and retailer. The webinar will cover guidance applicable to the keeping of bees, standards and regulations governing the production and composition of honey and will highlight areas of supply chain vulnerability to food fraud.

The presentations will be followed by a Q&A session with Cathal Henigan and Michelle McQuillan, Team Leader of the Food Compositional Standards team, Defra. The session will be chaired by Selvarani Elahi MBE.

This event is intended for individuals currently working within the food allergen testing arena, the food industry and those involved with the UK official control system.

This is the third webinar in the Quarterly Webinar Series of the Joint Knowledge Transfer Framework for Food Standards and Food Safety Analysis, which is a cross-government project (funded by Department for Environment, Food and Rural Affairs, Food Standards Agency, Food Standards Scotland and the Government Chemist) aimed at disseminating knowledge from government funded research to stakeholders to support UK laboratory capability and promote best practice in food safety and standards analysis.

Cathal has been in the food industry for 30 years with a focus on procurement and supply chain. For the last 20 years he has worked as Procurement Director at Kerry Foods, Wellness Foods and Valeo Foods UK. Rowse Honey which is the UK’s leading honey packer was latterly a subsidiary of Wellness Foods and now of Valeo Foods UK. Cathal has had direct responsibility for the procurement/supply chain of honey in Rowse for 12 years. He became Chairman of BHIPA (British Honey Importers and Packers Association) in 2016 and has held that position since, representing the association at national and EU level.

Michelle is Team Leader of the Food Compositional Standards team in Defra’s Agri-Food Chain Directorate. She has a PhD in chemistry and has been a civil servant for over 25 years. She’s had various roles across the food area in Defra, the FSA and MAFF. Currently she is responsible for policy on specific foodstuffs of which honey is one. Michelle was involved in the negotiations on the Honey Directive in 2001 including its most recent amendment in 2014. She was also involved in the development of the international Codex Honey Standard.

Climate Change Latest update on licensing discussions with the Eu…
0
✖