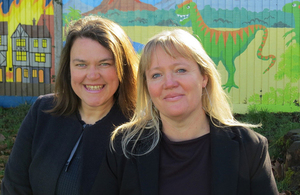 A partnership based on trust

Alison and Rebecca had been working at the school as deputy and assistant head respectively. They had worked together for many years including in the classroom where their approach was very aligned. When an interim headship opportunity arose, Alison made it clear that she would only apply as a job share with Rebecca since they both worked part time. During the interim headship, they demonstrated the great added value of the partnership to governors and parents alike. When the permanent headship position became available, they jumped at the chance to formalise their partnership and have been in a substantive co-headship since 2015.

Sound simple? There were certainly barriers, not least the rarity of job-sharing heads.

Winning over the governors

It was important for Alison and Rebecca to articulate to governors how the partnership would benefit the school community. They knew of 2 successful examples and in preparation, visited them to hear about their experiences.

It eventually became apparent, when a parent offered to write in support of the co-headship, that the best way to persuade the more conventional members of the governing body was to point to the views of the parents and children. With the parent survey reflecting their belief in the leadership and management of the school, they were able to make the case and secure the permanent position. This belief was underlined by their outstanding rating for leadership and management in their school inspection in May 2015. The report in 2015 noted that: ‘The leadership of the joint headteachers is outstanding. Parents, staff, governors and pupils recognise this. The joint headship is organised very effectively, with each headteacher working on site for 3 days with an overlap day to ensure continuity. Staff and governors speak strongly of the advantages of the arrangement. As the academy improvement partner said, “The two heads have complementary skills, but are at one on the important things.” As one pupil said, “two heads are better than one.”

They acknowledge there can be associated costs with job sharing, however, “in our experience you get more than you pay for: the sum is greater than the parts”. Costs in the short term are compensated by benefits in the longer term.

Whilst there is a 6-day headship cost, they have sought to ensure that leadership team costs are balanced, for example, by having a 4-day deputy head. Following a financial benchmarking exercise with other academies in their multi-academy trust, they found that their overall leadership costs were actually below average.

They feel that the most important ingredient for a successful job share is finding a partner that you are aligned with and with whom you can develop and shape a shared vision. They always support decisions made when the other is not on site and focus on collaboration rather than competition. They have developed 5 threads that make up their school vision which underpin the decisions they make. These common threads result in a sense of clarity for staff and governors who get the same answer to a question posed on a Monday as on a Friday, which is essential to be able to continue to drive school improvement.

Alison and Rebecca bring additional energy to the role since they’re not in school 5 days a week. “We have time to think; time to reflect and consider, and as a result, we don’t have that constant threat of burn-out hanging over us.”

Being in a headship job share also means they support one another and have a strong connection which reduces the stress and isolation experienced by many of those in a more typical headteacher post.

Communication is essential for the partnership. They have an overlap day on a Wednesday, in which they spend the first hour of the day talking through updates on the week, strategic matters, data and assessment, and school development planning. On this crossover day, they are mindful of not doubling up on doing the same activities to avoid duplication. When responding to emails, they copy each other in to ensure that the other can keep abreast of updates. They also agree key messages to be disseminated within the school.

They also have a handover on a Sunday night over the phone, which discuss less strategic matters, like ensuring the welfare of staff members. Of course, sometimes there are out of hours calls, but flexible working is in its very essence flexible – they don’t have to be on site every day but are flexible in other ways.

Their performance management is done as one unit, where both are equally accountable. They had previously divided roles and responsibilities along very discrete areas, like finance and curriculum. However, they found that many areas were interlinked and making artificial distinctions was not helpful. Instead, their responsibilities are now more joined up.

The benefits for pupils

They have found that their job share enables the welfare of 631 children and their families to be spread so that high quality care and support can be provided. This is without the weight of individual responsibility that can lead to poor mental health in leaders in schools.

98% of 331 responding parents recently said that they would recommend the school to other parents. Alison and Rebecca are clear that it is the quality of staff in every part of the school, in every role they fill, that is responsible for such a happy community and this happiness starts with them: “We have the best job in the world.”

The benefits for staff

Promoting flexible working to staff at all levels has sent a message that the school invests in their staff, helping to retain highly skilled teachers. They’re also clear that recruiting and retaining quality staff will mean a better experience for the children and families they serve and this is ultimately what guides everyone who works at Boxgrove.

Staff members also have more choice on which headteacher to approach on certain matters and depending on their existing relationship with Alison and Rebecca.

There have been no instances of long term sickness of staff members – they believe that flexible working helps ensure that there is work-life balance.

Their advice for people interested in job sharing is: “If you’re looking for a job share, be bold about it. Be confident in your offer as a combination and don’t apologise for only working part time – we need to free ourselves from the belief that if you work flexibly you’re somehow less committed: not true. If anything, it shows more commitment because it usually means that you’re prepared to leave your own children to teach other people’s”.