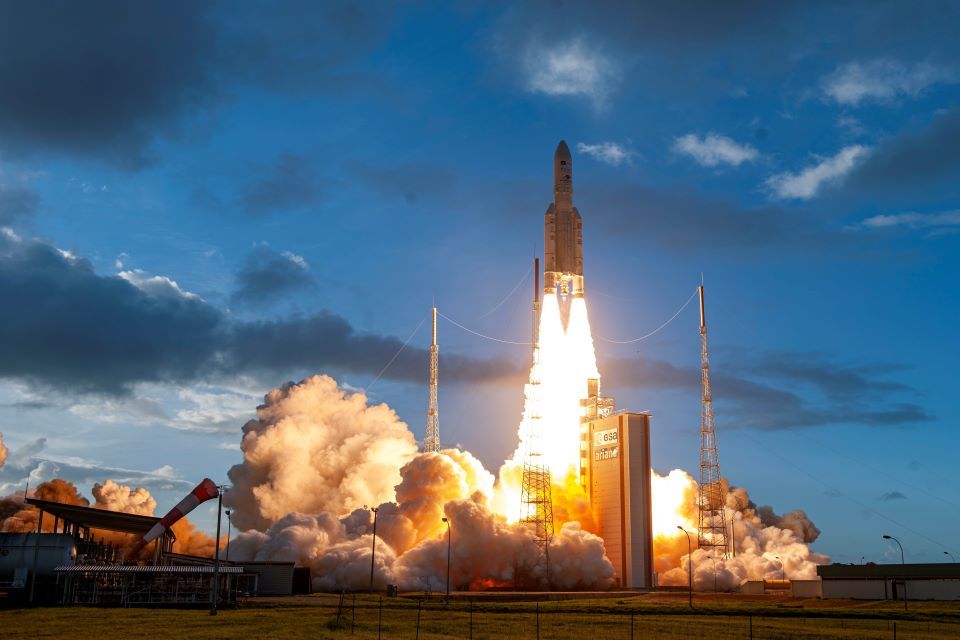 Eutelsat Quantum, backed by UK Space Agency funding and built in Britain by Airbus in Portsmouth and Surrey Satellite Technology (SSTL) in Guildford, is the first of a new generation of fully reconfigurable satellites that can respond while in orbit to changing demands on Earth.

Until now large satellites were configured on the ground for specific tasks that could not be changed after launch. Eutelsat Quantum’s coverage, bandwidth, power and frequency can all be altered in orbit.

The satellite’s beams can be redirected to switch between functions from broadcasting TV, enabling data protection and recovery, to delivering data connections to aeroplanes to improve communication for passengers. This flexibility means satellite operators can offer a wealth of new and emerging applications such as the next generation of drones supporting the NHS or connectivity in driverless cars supporting road safety, at the press of a button, without having to wait for years for bespoke equipment to be produced.

Named due to the quantum leap it brings in space telecommunications, the satellite could also support government broadband services in remote and rural areas, and help monitor critical national infrastructure such as water supply, energy and farming.

By investing in ground-breaking international projects like this one, we are helping UK businesses transform science fiction into commercial advantage, resulting in jobs, growth and innovation.

This game-changing technology will ensure the UK continues to lead the world on telecommunications satellites and further bolster our growing space sector, which already generates £16.4 billion of income annually and supports 45,000 jobs.

The UK Space Agency has invested £65 million in Eutelsat Quantum, through the European Space Agency, in addition to an expected £170 million from UK industry. Users are expected to include governments, communications on the move and data networks. It will offer extensive coverage of the Middle East and North Africa region, stretching into Europe, Africa and Central Asia.

In the future all satellites are expected to be reconfigurable, enabling the next generation of space applications, and supporting existing applications – such as telecommunications and Earth observation – which require the movement of large data sets. This will make space more accessible, sustainable and help grow the sector.

I am proud to witness the successful launch of Eutelsat Quantum, which is the result of an ESA Partnership Project. ESA fosters innovation in the space industry in the UK and across Europe, enabling it to succeed in the highly competitive global telecommunications markets. Investing in space creates jobs and prosperity on Earth.

The launch, which was delayed in part due to the Covid-19 pandemic, took place last night (30 July 2021) on an Ariane 5 launcher. Eutelsat Quantum’s final geostationary position is some 22,000 miles above the Earth and it will come into service in October.

The 3.5-tonne telecommunications satellite, which is the size of a delivery van, was developed under an ESA Partnership Project with French operator Eutelsat, satellite manufacturers Airbus and Surrey Satellite Technology Ltd.

The satellite consists of three main components. The payload was built in Portsmouth, the platform was built in Guildford and the active receive antenna was built in Madrid. These three components came together in the Airbus satellite test facility in Toulouse prior to shipment to launch site.

Richard Franklin, Managing Director of Airbus Defence and Space in the UK said:

The revolutionary technology we designed and manufactured here in the UK for Eutelsat Quantum confirms our position as a global leader in state-of-the-art satellite payloads. Last year Airbus secured 40% of the geo telecoms market, up from an average 25% share, and Eutelsat Quantum is one brick in that success story – which has directly led to the development of our latest reprogrammable satellite OneSat.

Eutelsat Quantum demonstrates the value of partnering with space agencies to bring the latest technologies to the market faster to deliver improved services for customers and users across the world.

The EutelSat Quantum programme presented many challenges for SSTL to overcome during the development of the satellite system design, mechanical design, propulsion system and key subsystems within the satellite platform.

The skills and knowledge gained through successfully overcoming these challenges has enabled us to refine our engineering approach, especially for markets and applications where system reliability and availability are key requirements, and, with the continued support of the UK Space Agency and ESA, has put us in a very strong position to deliver our exciting upcoming pathfinder missions.

Our congratulations to Arianespace and the Guiana Space Center teams for successfully launching the Eutelsat Quantum satellite. The collaboration between Eutelsat, ESA, the UK Space Agency and Airbus Defence and Space on this ambitious satellite program has resulted in a world-first.

Eutelsat Quantum will supply services with unprecedented in-orbit reconfigurability in coverage, frequency and power, allowing complete mission rehaul, at any orbital position. It is a testimony to the innovative spirit and expertise of the European space industry.

Future sales of the technologies developed under the programme are expected to create more jobs.