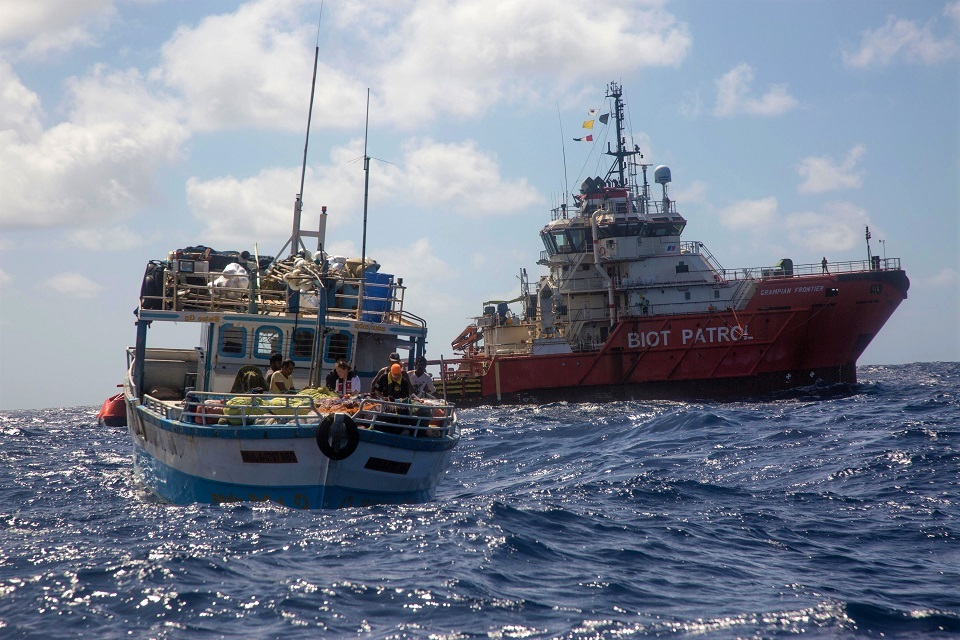 More than 4.3 million sq km (2.7m miles) of some of the world’s most precious marine environment – 1 percent of all the world’s ocean – will be protected following the success of the UK’s Blue Belt Programme, the Prime Minister has confirmed.

The announcement by Tristan da Cunha of a new Marine Protection Zone will safeguard the future of sevengill sharks, yellow-nosed albatrosses and rockhopper penguins in the remote archipelago and means the Government has now exceeded its ambitious target to protect 4 million sq km of ocean.

The isolated UK Overseas Territory, home to the world’s most remote human settlement, has today declared the largest fully protected marine reserve in the Atlantic Ocean at 687,000 square kilometres (265,252 square miles). This will close over 90% of their waters to harmful activities like bottom-trawling fishing, sand extraction and deep-sea mining.

The Tristan da Cunha community was supported by the UK’s Blue Belt Programme, which provides £27 million over five years for marine conservation around UK Overseas Territories, and international organisations.

They join other Overseas Territories who protect their waters with the support of this initiative, including Ascension Island, the British Antarctic Territory, British Indian Ocean Territory, South Georgia and the South Sandwich Islands, the Pitcairn Islands and St Helena – covering an area 17 times the size of the UK and over 1 percent of the Earth’s entire ocean.

This achievement comes with one year to go until the UK hosts the UN Climate Change Conference (COP26) – to be held in Glasgow in November 2021. As President, the UK Government will bring world leaders together to drive progress on tackling climate change and forge new ways to protect marine biodiversity and tackle plastic pollution in our ocean.

We are in danger of killing our seas. We are warming them up, making them more acidic and every day we fill them with turtle-choking, dolphin-poisoning plastic that is turning our ocean into a vast floating rubbish dump.

That’s why I am delighted that the United Kingdom has now protected more than 4.3 million square kilometres of the world’s ocean, following Tristan da Cunha’s announcement.

I am now calling on other nations to join us in our ambition to protect 30 per cent of the world’s ocean by 2030. We need collective global action if we are to bequeath a world that is every bit as wonderful and magnificent as the one we inherited.

The waters around the UK’s Overseas Territories are some of the richest and most biologically diverse in the world – but they face a range of threats, including climate change, damaging fishing methods and unsustainable extractive activities.

Through its ambitious Blue Belt Programme, the UK government has worked in partnership with the Overseas Territories to bring together marine experts and cutting-edge scientific research to protect and manage the waters surrounding the Territories.

We are hoovering life out of the ocean at an appalling rate, so this new marine protected area is really a huge conservation win and a critically important step in protecting the world’s biodiversity and ecosystems.

Tristan da Cunha islanders and this coalition of NGOs and Foundations have done an extraordinary thing and deserve real gratitude and praise. It means our fantastic Blue Belt programme has over 4million square kms of protected ocean around the UK Overseas Territories.

The Royal Society for the Protection of Birds (RSPB), also played an important role. For the past two decades the RSPB has worked closely with the local community in Tristan da Cunha and conducted vital research to secure long-term protection.

This small community is responsible for one of the biggest conservation achievements of 2020. We are enormously proud to have worked with our friends on Tristan, the UK Government’s Blue Belt programme and wider partners to achieve this world-leading designation. This will protect one of the most pristine marine environments on the planet, home to tens of millions of seabirds, threatened sharks, little-known whale species and booming seal populations.

The Blue Belt Programme makes a significant contribution to the UK-led 30 by 30 initiative, an international commitment made by the Global Ocean Alliance and launched by the UK in 2019 to protect at least 30% of the global ocean in Marine Protected Areas by 2030. A total of 32 countries have now joined the alliance.