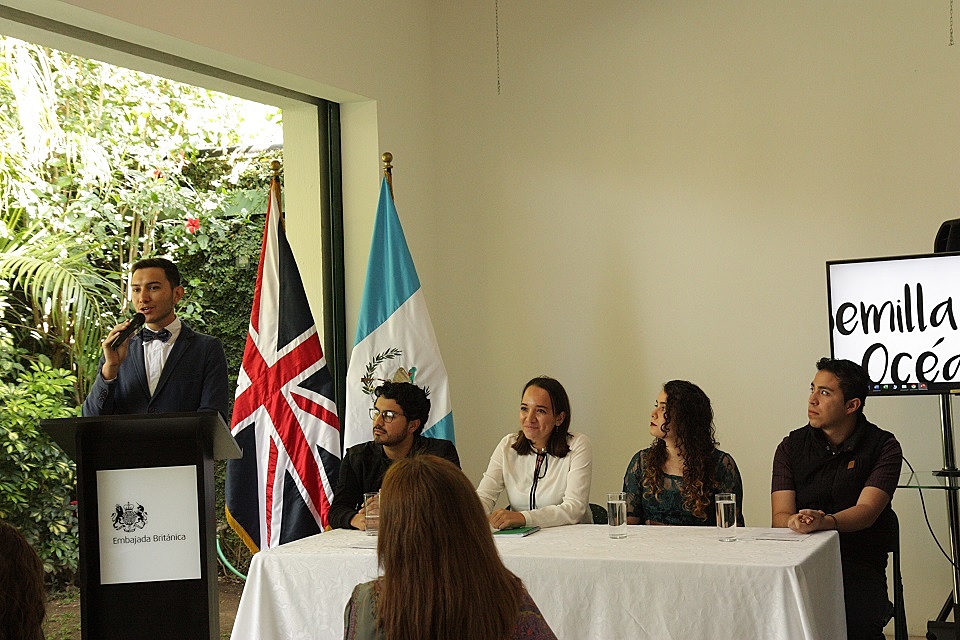 The Summit was an event organized by the British Embassy in Guatemala and Semillas del Océano on September last year, which aimed at empowering a new generation of young Guatemalan leaders to promote actions that would reduce solid waste pollution.

After participating at the Summit and submitting their project ideas, the four youth groups who received the “Mini-Grants: 4Rs” (Reduce, Recycle, Reuse and Reject), presented their results in favor of the environment in Cobán, Zacapa, Villa Nueva and San Lucas Tolimán.

The fund was given by the British Embassy in Guatemala, Semillas del Océano and MAR Fund, for a total of twelve thousand Quetzales (Q 12,000) which was split among the four groups of young people. In addition to the fund, the winners had follow-up sessions and field visits by Semillas del Océano, to reinforce them through training for the correct implementation of their projects and its impact assessment.

The first-place winner group executed the “Makamul” project in Cobán, Alta Verapaz to reduce the environmental impact of discarded notebooks at the end of the school year. The young people managed to create environmentally friendly notebooks, made from rescued and reused paper from educational centres in Cobán. The amount of paper collected by the project was more than 100 quintals.

The second group presented the results of the “La Casa de los Bichos” project in Zacapa, through which they built 15 structures specially designed to provide shelter for insect pollinators that are important for the dry forest survival of that region. For the manufacturing of the “hotels for bugs”, the young people used plastics, waste and rescued materials in clean-up events that were organized with the community of Pueblo Modelo, Zacapa.

The young people who carried out the “Restauración de áreas verdes” Project in Villa Nueva, managed to organize the neighbours through the “Your green space” campaign to restore the green areas in the communities INDE and GUATEL II, through environmental improvement and proper management of solid waste. They also managed to place two collecting stations for recyclable materials with segmented sorting cans. Since its inauguration, recycling points have collected 85.76 pounds of waste.

The group that executed the “Buenas Practicas GT” project in San Lucas Tolimán, organized an aquatic and terrestrial clean-up in Lake Atitlan to reduce the volume of solid and organic waste found in the area that is damaging the ecosystem. They manage to extract 439 pounds of garbage. They also did a reforestation in the sector with the support of 38 people who voluntarily came to help.

We created the concept of the Summit for the 4Rs as a space where young people from Guatemala could learn about the environmental problem that is causing waste pollution and how they can take actions to tackle this issue from the root.

We want this Summit to become an event that can be held year after year, and that more young people can be trained in a topic with such relevance worldwide. Guatemala has talent, but for this to happen we need the sponsorship of institutions and companies.

International Affairs Over 2,000 UK personnel deploy to Norway for major…
0
✖